Buried under Jackson, Mississippi’s streets are miles of untapped dark fiber. The city council and new mayor’s office hope to change that, and have made moves to relight the fiber optic cables and put Jackson on the path to become the next regional tech hub.

The dark fiber city officials plan to relight have been around since at least 1997, and were installed by Capitol Cablevision, a subsidiary of Time Warner (now Spectrum Cable). They city already manages a little more than 100 miles of fiber cable, and 12 municipal facilities use it for high speed network access.

The Clarion Ledger of Jackson recently published a comprehensive summary of the municipality’s plans to capitalize on existing fiber assets. By tapping into the fiber incrementally, it hopes to slowly but surely get the city beyond 1 gigabit broadband speeds. So far, fiber access would be available for schools, hospitals, and other city institutions, as well as businesses in the area. Fiber-to-the-home (FTTH) is still years off.

Mississippi’s Off the Map

Mississippi is one of the lowest-ranked states in terms of access to broadband. In a 2017 opinion piece for the Jackson Free Press, Mississippi State University professor Pete Smith wrote about just how far reaching the digital divide is in the state:

“A September 2017 joint congressional report shows that one-third of Mississippians lack access to residential high-speed-Internet technology…as a 2016 Mississippi State University Extension Service report notes, broadband speeds for a majority of those who have access still fail to meet the suggested FCC download and upload speeds [of 25 Megabits per second download/3 Mbps upload],” Smite wrote. “In other words, we’re almost dead last among all states in our efforts to close the broadband ‘digital divide.’”

The only provider currently offering 1 gigabit service to businesses in Jackson is C Spire, a Ridgeland, Mississippi, telecom company. Comcast and AT&T provide much of the residential Internet service in Jackson, with advertised download speeds of up to 150 Mbps and 75 Mbps, respectively.

On top of broadband access lags, the state’s capital, Jackson, has also experienced economic blight as businesses shuttered and persistent vacancies plagued downtown, around the time of the late 2000s recession in the U.S. With the untapped fiber in place, and high-quality connectivity a known economic development tool, it makes sense to take advantage of all that potential.

When planning action to improve local connectivity, one of the first tasks a community typically takes on is an assessment of existing fiber. In addition to institutional networks that serve municipal and local government facilities, other fiber in the community may include those installed for utility purposes, traffic control, and, as in the case of Jackson, fiber installed and abandoned by companies that no longer operate in the community. With the focus on getting from 1 gig, to 10 gig and, eventually, 100 gig speed capabilities, an expansive fiber network could attract larger companies or data centers who need high-capacity connectivity. In May, Mayor Chokwe Antar Lumumba, along with Chief Administrative Officer Robert Blaine, laid out a comprehensive plan to reinvigorate the city and remove blight that included working toward bringing 100 gigabit speeds to the city.

The timeline for rolling out fiber access is incremental, but those anchor institutions and businesses could be lit up as soon as December of this year. The city plans to implement the roll out and fiber expansion via a public-private partnership (P3) with LiteCloud and, by extension, Cogent Communications (with whom LiteCloud subcontracts). 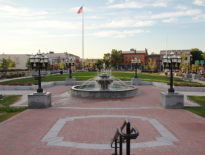 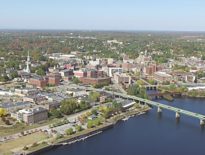