Handcuffed by the Courts:

Beginning in the late 1970s, a series of Supreme Court cases upended U.S. antitrust laws — laws that were once the linchpin of a comprehensive, democratic check on corporate power. These rulings gave powerful corporations free rein to capture control over markets by strongarming suppliers, kneecapping smaller competitors, and buying up rivals. This was a radical shift in policy, and it was instituted by judges, not Congress. 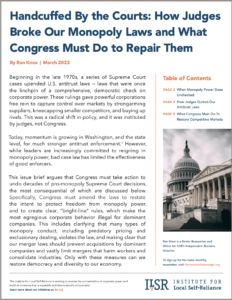 Today, momentum is growing in Washington, and at the state level, for much stronger antitrust enforcement. However, while leaders are increasingly committed to reigning in monopoly power, bad case law has limited the effectiveness of good enforcers.

Specifically, Congress should be guided by two overarching goals:

Knox also recommends that Congress pass legislation addressing two key areas of antitrust law: abuses of dominance and harmful mergers. These proposals would remove the judicially created barriers that have clouded the goals of antitrust and handcuffed our efforts to police corporate power.

Read Handcuffed by the Courts.

If you like this issue brief, be sure to sign up for the monthly Hometown Advantage newsletter for our latest reporting and research.

Issue Brief: Handcuffed by the Courts 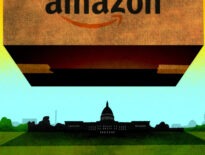 Press Release Statement on House Judiciary’s Referral of A… 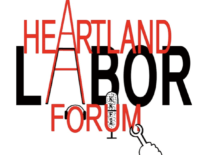