In one turbulent decade, the Tories sold off most of Britain’s public utilities: water systems in England and Wales in 1989; electricity utilities in 1990; the natural gas network in 1995; British Rail in 1996.

They also dramatically replaced public employees with private contractors. In 1997, when Tony Blair and the Labour Party regained power, they embraced outsourcing with surprising ardor.  Blair has no regrets.  Indeed, in 2015 he warned the Labour Party not to regress.  “So let me make my position clear: I wouldn’t want to win on an old-fashioned leftist platform. Even if I thought it was the route to victory, I wouldn’t take it.”

By 2017 the UK was spending 13-15 percent of its annual GDP on private contractors.  Oversight diminished as regulatory budgets were slashed, technical capacity decayed and regulators became much too cozy with the regulated.

In spite of the hype, there was never much evidence the private was superior in delivering public services. Customer satisfaction with the privatized British Rail remains low.  Since 1989, English water utilities have raised their rates 40 percent above inflation.  Adding insult to injury, England’s largest water company, Thames Water, has siphoned off profits to offshore investors and paid almost no corporation tax for the past decade.

In 2013, one large government contractor, Serco, was discovered to have been overcharging the government for electronic monitoring of offenders. “Prisoners escaping from G4S supervision have become the stuff of jokes,” Bronwen Maddox, director of the Institute for Government, bluntly comments in the Financial Times.  Earlier this year the National Audit Office, the government spending watchdog, found privately financed schools and hospitals cost taxpayers billions.

When Carillion, the U K’s second largest construction company went belly up with debts of $1.7 billion and cash on hand of only $37 million, the reigning economic and political orthodoxy suffered a severe body blow.

People woke up to just how dependent the country had become on private contractors for roads and schools and hospitals and after-hours doctors and air traffic control and parking regulation and more.  When it collapsed Carillion held 420 government contracts.

Carillion’s collapse “really shakes public confidence in the ability of the private sector to deliver public services and infrastructure,” Bernard Jenkin, Conservative chairman of the Parliament’s Public Administration Committee told the BBC. “You’ve got to treat yourself much more as a branch of the public service, not as a private company just there to enrich the shareholders and the directors,”

The Economist declared, “High-profile fiascos and dwindling cost-savings are making many question whether the idea (of outsourcing) has run out of steam. The Financial Times opined, “the country that was the global frontrunner in privatisation is rethinking how to run its essential utilities. Almost three decades after they were sold off, critics — and many voters — believe that investors have run rings around the watchdogs set up by the government to regulate the industries.”

“Treasury rules require it to demonstrate that this financing route provides better value for money than conventional government procurement,” a Parliamentary investigation conducted earlier this year explained. But “after more than 25 years the Treasury still has no data on benefits to show whether the PFI model provides value for money.”

Professor Dexter Whitfeld, Director of the European Services Strategy Unit, testified that returns to investors in the PFI projects he examined were often in excess of 25 percent.  Half of the equity in these projects had been sold to offshore funds.  Between 2001 and 2017 the five largest offshore infrastructure funds made profits of $3.75 billion between 2001 and 2017 but paid less than 1 percent in taxes on these profits.

A House of Commons investigation released in June found the entire theoretical edifice justifying privatization had been built on sand.  In a blunt refutation of 30 years of ideology the Committee concluded, “the Government was unable to provide significant evidence for the basic assertion behind outsourcing: that it provides better services for less public money, or a rationale for why or how it decides to outsource a service.”

There is, however, significant evidence against this “basic assertion.” England privatized its 10 water utilities but Scotland’s remained in public hands.  Twenty-five years later one investigation found Scottish Water’s prices lower than the lowest found in England, and 20 percent lower than the average. Indeed the bill for South West water, in 2013/2014 was so astronomical the national government pays each household to reduce it by 10 percent!

The June elections gave us more concrete evidence of the change in the zeitgeist. Jeremy Corbyn’s Labour Party firmly embraced an “old fashioned leftist platform:” The state taking back rail, water, energy and the post office and dramatically reducing outsourcing.  And made very impressive gains.

For the moment, Brexit and the question of Britain’s relationship with Europe, has overshadowed the debate about the role of the public and the private.  But in the next election the issue may well move center stage.

Is Britain’s Long Love Affair With Privatization Ending in Divorce?

From the Desk of David Morris New Zealand: Feminist Policies Drive a Progressiv… 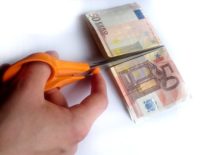 From the Desk of David Morris Cashlessness Hits a Speed Bump