As schools and businesses ask people to stay home to reduce the spread of Covid-19 coronavirus, I wanted to share some thoughts about how I expect broadband Internet access networks will handle the change and increase in broadband traffic in residential areas.

Our first reaction is that, as with so many areas with network effects, the rich will get richer. This is to say that historic inequities will be exacerbated — people that have been able to afford the high-quality networks will probably see very little disruption and those who have older networks may be effectively disconnected.

Those on fiber optic networks probably won’t notice major changes in demand. This is the easy one — it is why we have long believed that fiber optics should be the goal for the vast majority of Americans.

Most modern cable networks should be also able to handle the demand — especially on the download end. This is good because 2 out of 3 Americans with broadband gets it from a cable network. Upgrades in recent years from the aggressive cable companies (Comcast Xfinity, Cox, and some of the many smaller cable networks — Charter Spectrum less so) should allow more than sufficient download capacity even if home video streaming increases significantly. But in smaller towns, where the local cable companies haven’t been able to afford those upgrades and the bigger cable providers have just ignored them, I would expect to see intermittent and in some cases, persistent congestion problems from bottlenecks.

In the upstream direction, the cable networks will have some challenges. I wouldn’t expect most Comcast or Cox markets to have too many problems, though neighborhoods with lots of professionals using video conferencing tools could congest. I would expect Charter Spectrum, Mediacom, and many of the others to have frequent congestion for upstream connections, lowering throughput extremely at times.

Fixed Wireless networks will be all over the board. Urban and advanced fixed wireless networks like Monkeybrains in San Francisco, Open Broadband in North Carolina, and NetBlazr in Boston will probably scale just fine. But in rural areas, many fixed wireless networks were constructed without the headroom for the expected increase in demand. Some will be able to accommodate it, but many will not. Some, like Vistabeam in the west will probably have entire areas with recent upgrades that work fine but areas with older technology may really struggle. This is a key test for fixed wireless – if many of these networks cannot meet demand, we will see more of an effort to limit federal broadband subsidies to business models that don’t break when most needed. In a few months, I hope Matt Larsen is telling everyone I was a fool to have doubts.

DSL will be an unmitigated disaster in many places, especially where Frontier and Windstream are the monopoly. These networks may become unusable — though many may think of them as unusable now, congestion could so overwhelm the systems that they become entirely unusable. I have recently used the “bar noise” problem to describe what happens with networks as they congest — each person in a crowded bar talks louder and then louder as aggregate noise increases. But with DSL networks in the the coming weeks, this may be more like everyone turning amplifers to 11 rather than shouting. All the more reason to be furious with the Federal Communications Commission for dumping billions into these obsolete upgrades over the past 6 years.

Those still on DSL are mostly there because they have no better option or cannot afford the higher prices for cable connectivity. Thus, we will see yet another area of our economy where those who have historically been disadvantaged be overwhelmingly disadvantaged from a twist of fate they had no way of preventing.

Whether on failed DSL or struggling fixed wireless networks, I think there will be insufficient capacity to productively work from home at best and in many cases, and inability to even stream content.

Satellite? Again, something many thought could not get worse will, especially with daily data caps, etc. Unlike with wired networks, the caps are probably actually necessary because the system is not designed to handle a large concurrent demand from users. It will not scale at all.

Speaking of bandwidth caps, we have long argued (with no real opposition) that they are illogical as a solution and only exist because monopoly providers have found a way to extract more wealth from captive households. This will be further demonstrated as we probably see the caps relaxed during these quarantine period(s). After all, if caps can be waived during the single greatest period of congestion, what justification could they possibly have? See Stop the Cap and Motherboard.

After publishing this, a comment on Twitter made me realize I focused too little on a related problem – the connections for businesses. Many businesses also rely on asymmetrical networks (often cable) in which they have much slower upload capacity than download. While everyone is in the office on a fast Wi-Fi or gigbit LAN, the slow uplink is not as much a problem as most traffic is within the office. But with some or most people outside the office, the office will be severely constricted in how much data it can send out to remote employees. This may well overwhelm cable networks and almost certainly DSL networks in those areas.

Another tweet noted that governments (and probably corporations) have not scaled VPN solutions to be ready for a massive increase in people working remotely. I have learned that state government is probably not alone in still having many people that use desktop computers and are not permitted to use other devices for work for security concerns. And rightfullly so!

I welcome people commenting to point out where they think I’m wrong, ask questions, or offer additional thoughts. 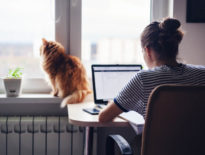 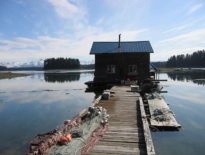