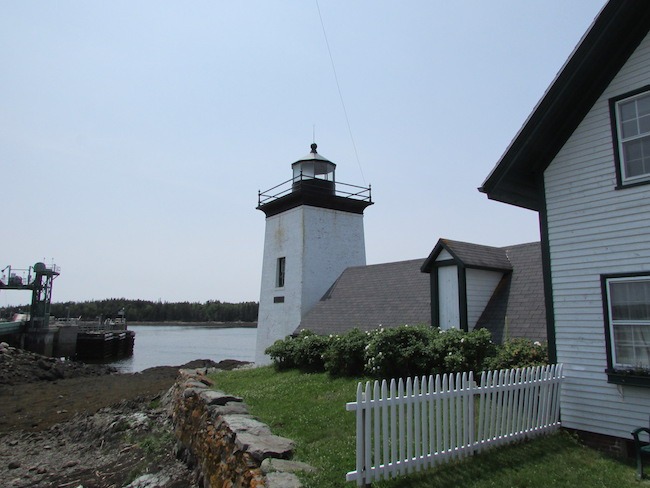 Islesboro Municipal Broadband (IMB) is about to celebrate its second birthday. Instead of two candles on a cake, the community has around 630 lit Fiber-to-the-Home (FTTH) subscriptions to mark the occasion. With more than 90 percent of the premises on the island connected to the network, the community can revel in its accomplishment as it considers the future.

Residents pay only $360 per year to connect to the gigabit service, which has become part of the “fabric of the island” says Roger Heinen, Selectman who’s part of the Islesboro Broadband Committee. Property owners also pay a modest increase in property taxes to satisfy the municipal bond the community issued to pay for deployment. In total, most property owners pay less than $85 per month for gigabit connectivity and the optional voice service from GWI. In addition to bringing fast and affordable high-quality Internet access to the community, Roger says that its reliability is so consistent that he thinks people have forgotten what the situation was like before the community network served the island community.

Subscribers report high satisfaction with IMB on biannual surveys. While there are still a few people in the community that have not connected to the IMB, he speculates that those people aren’t interested in connecting in any way.

Every connection in Islesboro provides gigabit Internet access and, according to Roger, the decision to limit offerings to one tier was a way for the community to reduce costs. There’s no need for complicated inventories of different types of gear, they know that every premise has the same gear and level of service, making billing easier and more streamlined, and they received a substantial discount because they bought so many of the same type of electronics. They knew that standardization would simplify and reduce costs and wanted gigabit service because it accommodates future innovation that demands more capacity.

In order to fund the deployment, Islesboro bonded $3.8 million to deploy the dark fiber network infrastructure. The infrastructure belongs to Islesboro, which maintains it. GWI, a Maine Internet access provider, lights the network and offers telephone center support along with handling any maintenance issue. Subscribers can also pay an additional $25 per month for voice service from GWI. The cost of maintenance and the cost of the bond has cost less for Islesboro than the community anticipated and less than poor service from the incumbent.

Passing on those cost savings to the people of Islesboro was a priority when community leaders decided to pursue the project. Providing affordable Internet access to chip away at the digital divide in Islesboro was a primary goal from the beginning. Before they developed the IMB, students would gather in the parking lot of the local school at night to do their homework, but now students work from home.

A New Reason for Island Living

People who have lived in Islesboro and struggled with poor Internet access are ready to leave those troubles behind, but so are newcomers to the picturesque community. Roger has met some new families who have come from other unserved rural areas and discovered that they could get fast, affordable, reliable connectivity in Islesboro. Most work from home, some as graphic designers or software developers for example.

Jennifer Hayden and her husband had sought the right place and considered Islesboro before, but didn’t move there until the IMB made it an option for them:

My husband and I were housesitting and working remotely for 4 years, searching for the place we wanted to settle down. We were all over both coasts, a bit in between and abroad too. We knew we loved this part of Maine from having visited briefly a few years earlier and had been looking for a house-sit in the area to try out living here.

Early on we connected with someone looking for a winter sitter for her dogs, at that time we asked her to do a speed test for the Internet and it came back abysmal, I don’t remember what it was but it was the only sit we didn’t take in four years because of slow speeds.

Three years or so later, the same woman posted for a winter dog sitter and, having forgotten we had been in touch previously, we applied and she told us that the house was due any day for a broadband upgrade–so we took the sit. We then promptly fell in love with this island and have been here ever since.

When we first moved here we were both working exclusively remotely, but we now combine the remote work with gardening and landscaping in the summer months for a local crew. While we love the outdoor work, we could not afford to live here without the winter/additional income, so we are so thankful for the affordable, lightening fast Internet that’s owned by our community!

There’s also a hefty percentage of the population that live elsewhere and come to Islesboro for summer getaways. In the past, they couldn’t stay long because they needed to get back to the office. Now that they have access to a gigabit, however, they’re able to extend their visits. Real estate agents note that the IMB has helped the rental market as large, extended families who have been coming to Islesboro for generations are able to stay even longer.

Now that the town has established their municipal network, town leaders are looking for new ways to use the infrastructure to get the most from their investment. They’ve discussed including installing high-quality teleconferencing equipment in the town hall so meetings can be streamed and establishing advanced telehealth services.

Roger says that the community hasn’t used the IMB as a public relations tool to attract more residents or businesses, but as word gets out about their super affordable and reliable gigabit, they can expect more people like the Haydens to find Islesboro.

Image of the Grindel Point Lighthouse in Islesboro by DrStew82 [CC BY-SA 4.0] 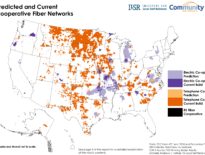 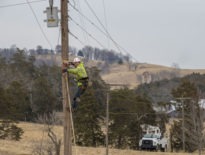