Earlier this week, the Public Utilities Commission of Hawaii approved the proposal of the islands’ largest utility to end net metering for solar customers. It’s the culmination of a years-long battle and a proxy in the national fight between utilities and solar producing customers. It’s also the first big decision taking Hawaii away from the “energy crossroads” between distributed and utility-scale power.

Ending net metering itself isn’t the problem. The 30-year-old policy was adopted because it was the only way most utility meters and billing systems could manage to credit customers for on-site power generation. And at the time, utilities didn’t much care because solar was for the oddball cabin-dwellers on the fringe and not an economically competitive and widespread alternative to their product. 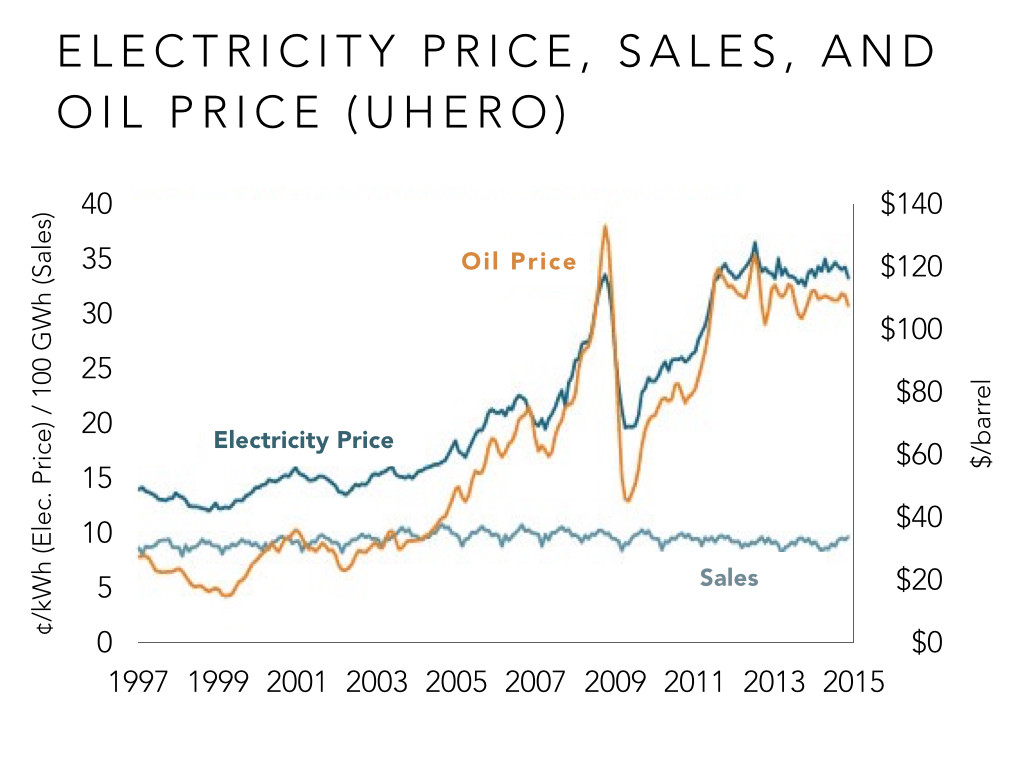 Now, solar is cost-competitive. Somewhere between 12% and 16% of Hawaiian Electric Company customers have solar on their rooftops. Solar provides from 30-53% of system peak load. Whether solar customers are getting compensated accurately for their exports to the grid has substantial implications for everyone’s cost of electricity. With electricity prices tied to oil prices, and averaging 30¢ per kilowatt-hour, Hawaii may be the only state where the value of solar electricity isn’t higher than the cost of electricity. That means that customers earning bill credits from solar electricity weren’t putting in as much value as they were getting out.

But if getting the compensation right was the issue, the utility’s adopted price for solar power has a fatal flaw: it’s too low.

The new “grid supply” tariff reduces the credit for solar electricity from the full retail rate—approximately 30¢ per kilowatt-hour—to the supposed cost of wholesale power for the islands’ utilities. This new price varies from 15¢ on Oahu to 17¢ on Maui to 24-28¢ on the less-populated islands. But the adopted price, supposedly modeled on the same calculation used by the Kauai Island Utility Cooperative, actually leaves out a crucial element. Jim Lazar of the Regulatory Assistance Project told Greentech Media in January that the utility’s avoided cost calculation doesn’t include the “purchased power” price—the cost of acquiring energy from oil and coal instead—which would add at least 3¢ per kilowatt-hour.

Ironically, the Public Utilities Commission received results of an actual analysis of the value of solar electricity for Hawaiian Electric Power in January 2014. It was preliminary and needed some more detail, but it’s a good start. The result? Solar’s worth was pegged at about 18¢ per kilowatt-hour, rising to 30¢ by 2020 and 40¢ by 2030. Even in a “lots of distributed solar PV” scenario, the value of solar still rises to 28¢ by 2030. On the other islands, the value is at least 20¢ per kilowatt-hour.

Hawaiian Electric also has had a feed-in tariff program for purchasing solar electricity from non-utility entities for several years. On a standard contract, the utility has been paying 18.9 to 21.8¢ per kilowatt-hour for solar electricity, based on the size of the project.

Three different data points on the value of solar in Hawaii, and all of them higher than the Commission’s approved price. 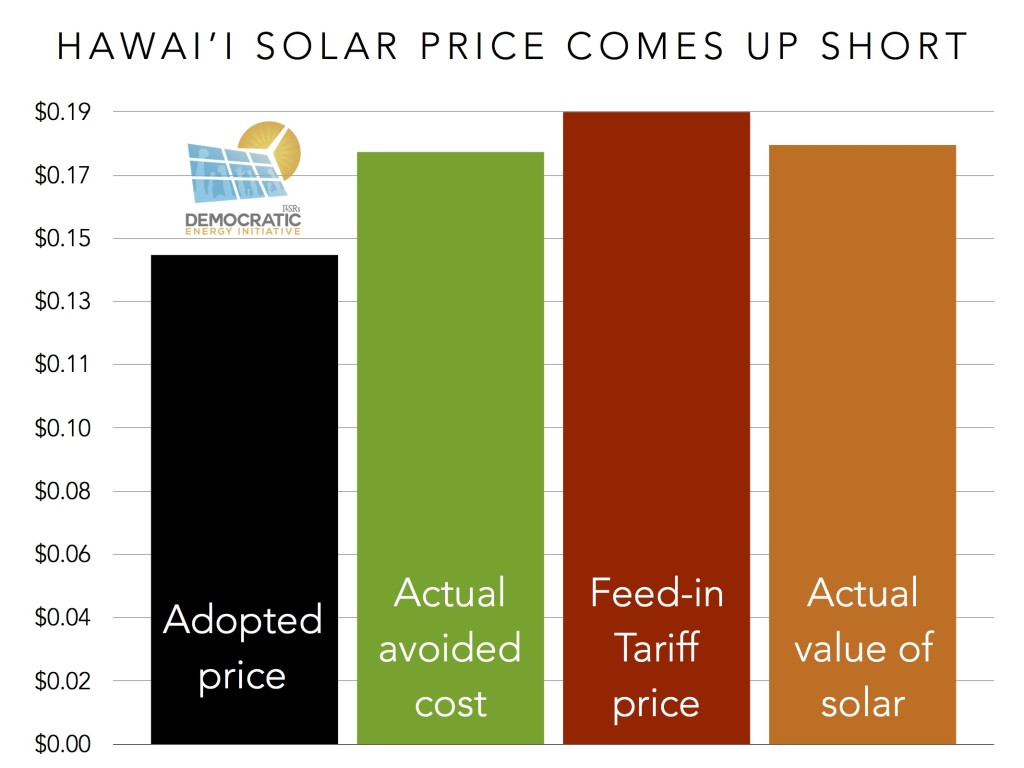 Hawaiian residents should be asking their Commission why it allowed the utility to adopt a price that was clearly too low, against a preponderance of evidence. It’s a disturbing choice, especially as the same utility faces a takeover bid from a mainland utility—NextEra—whose Florida subsidiary has a horrendous record of trying to quash distributed solar development (watch the video). The takeover isn’t popular, and now opponents have another example of why letting a mainland company enter the fray would add insult to injury. 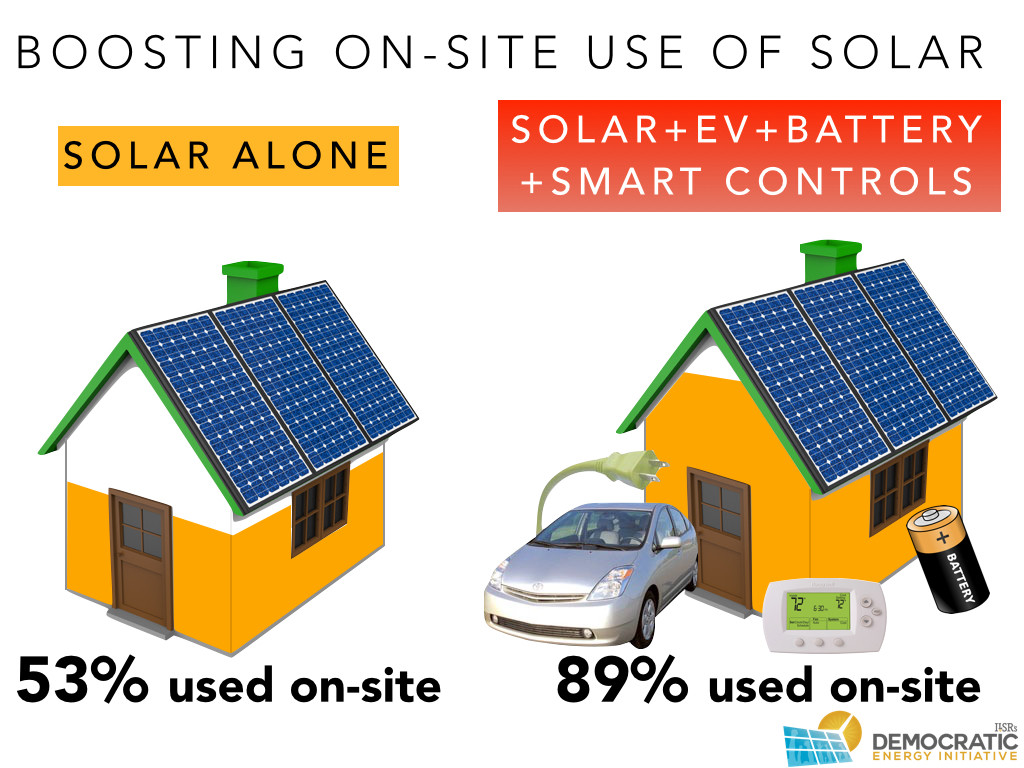 Part two of the decision is a new “self-supply” tariff offering expedited review for grid connection for customers who intend to use all their solar energy on their property. Customers will receive zero compensation for electricity exports, but will be able to reduce their bill insofar as they can use all of their solar electricity on-site. It requires purchase of a battery and the ability to shift energy use to the daytime to match solar production, but the Rocky Mountain Institute suggests that as much of 90% of solar electricity can be used on-site. It may pay off, since ILSR’s analysis suggests that solar plus a battery system can produce electricity for a residential customer for about 25¢ per kilowatt-hour, still about 5¢ less than purchasing it from the utility. 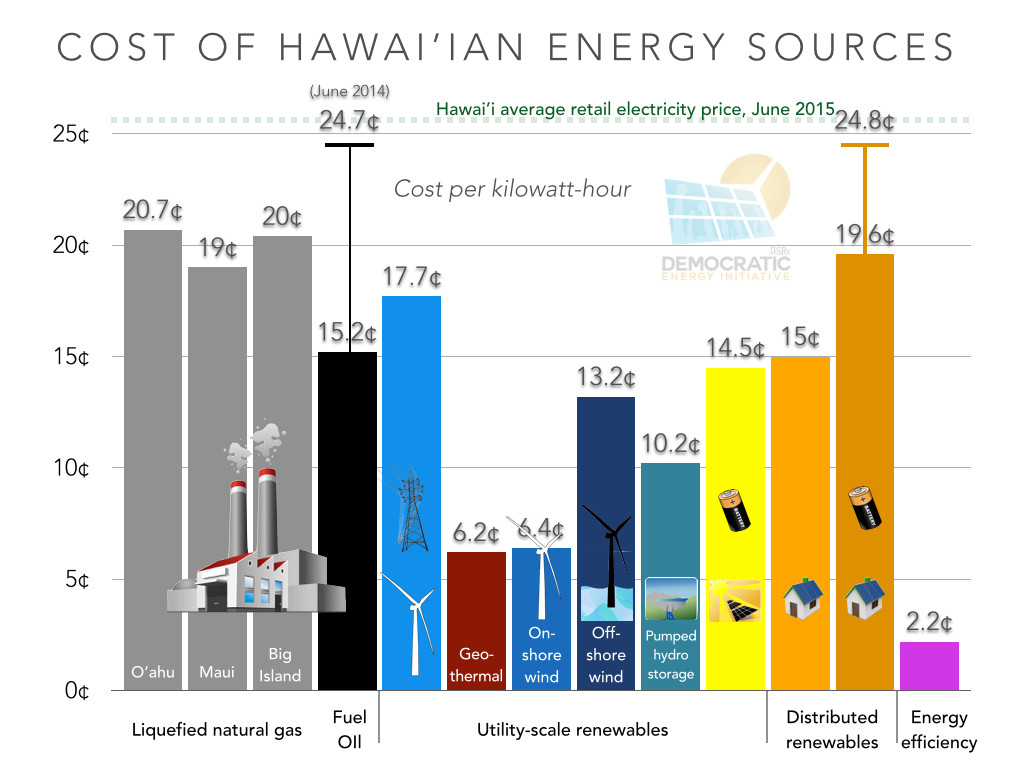 What’s really missing, beyond a factual basis for the price for solar electricity is a time-of-use tariff. It would also allow customers to shift their electricity use and electricity export to the most valuable times for the grid and for themselves, if the price is set right. The Public Utilities Commission requested the utility offer a tariff in the near future, but given the recent history, getting a accurate price may be too much to hope for.

There’s no question that Hawaii was the first and best place to identify a replacement for net metering, one that accurately priced and paid for solar electricity produced by electric customers. Unfortunately, they got it wrong, and Hawaiian solar producers are paying the price. 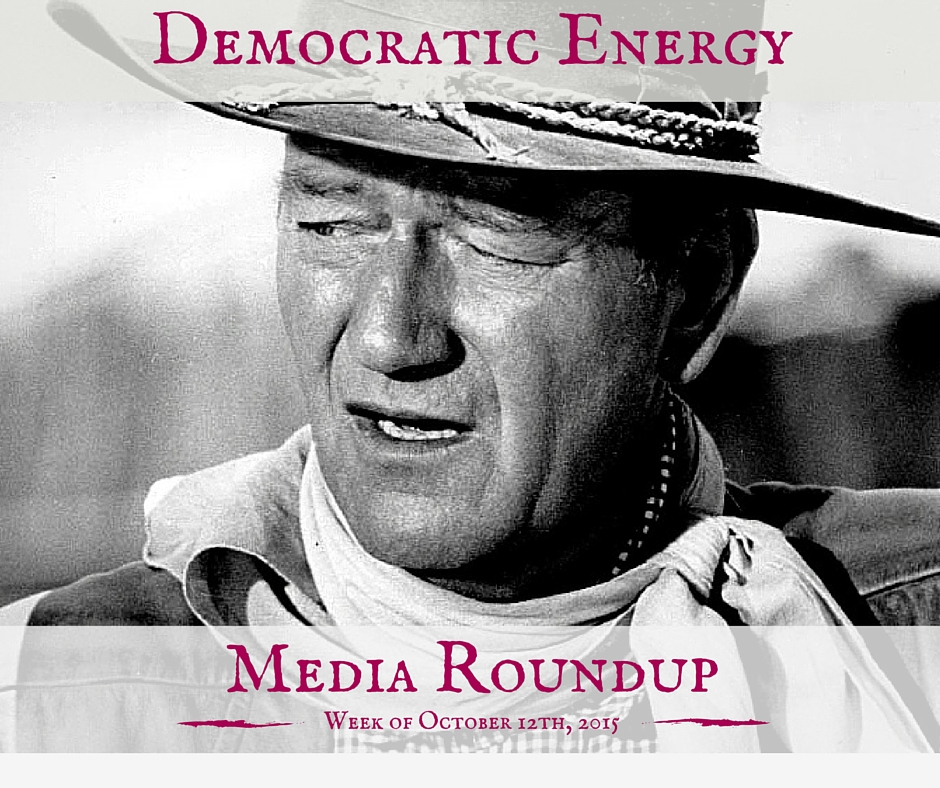 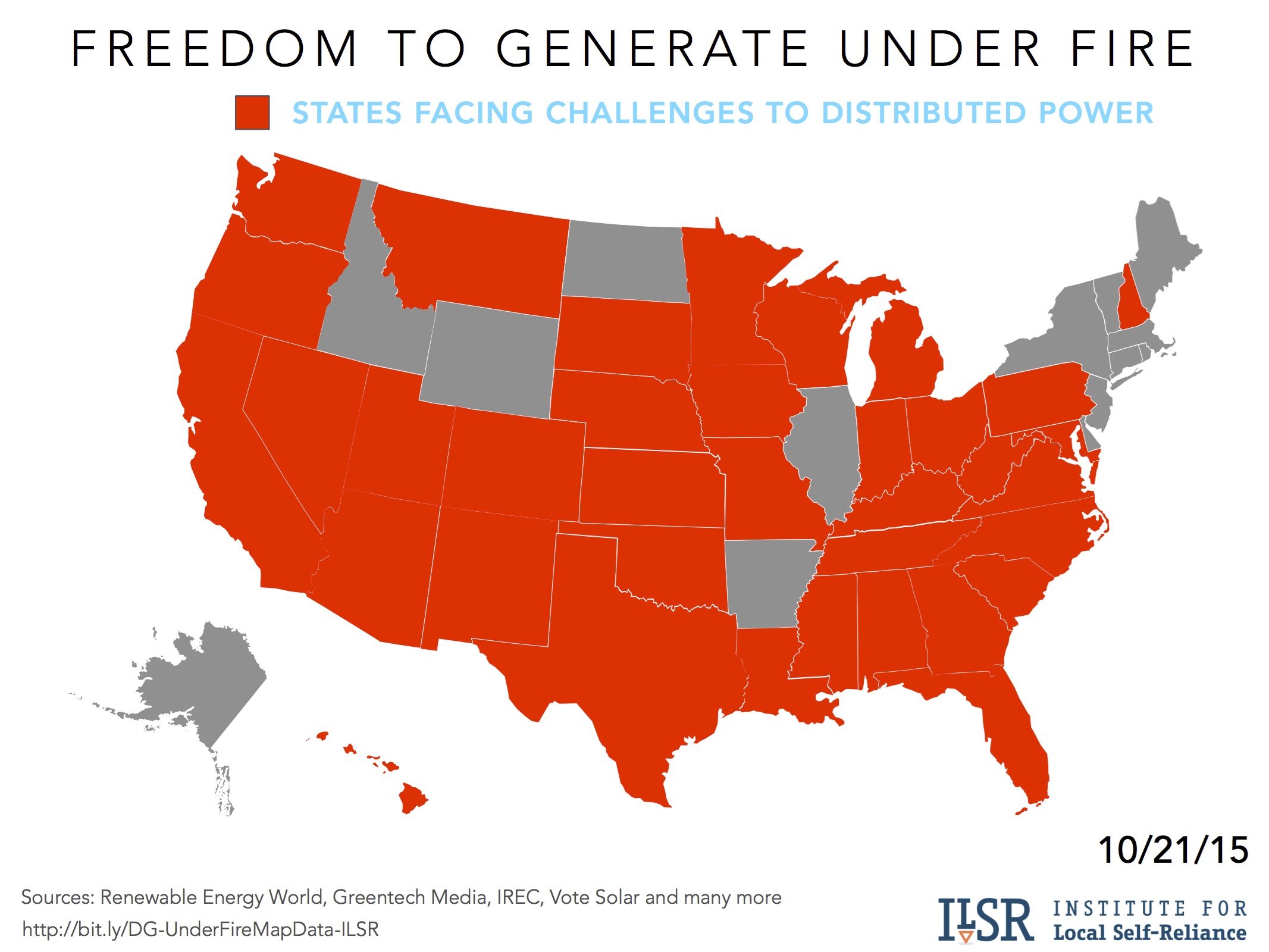