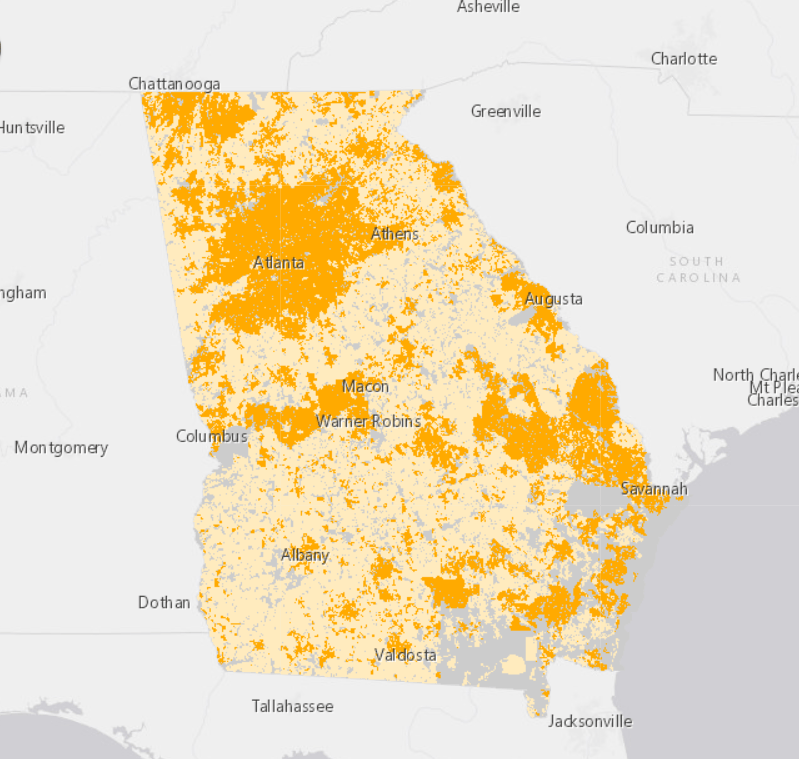 As Georgia Broadband Deployment Initiative (GDBI) Director Deanna Perry promised last September, a state intra-agency task force has completed its mapping project of broadband Internet access in the Goober State. It offers a far more detailed look at who does and does not have Internet access — right down to individual homes and businesses.

The interactive map shows what we’ve known for a long time: that the FCC’s data on nationwide coverage dramatically overstates baseline broadband availability (defined as a connection capable of 25/3 Megabits per second (Mpbs)). This is especially true in rural areas. Georgia’s data, in particular, shows that of the more than 507,000 homes and businesses in the state lacking any access options, nearly 70% of these locations are in rural parts of the state. The reason for this discrepancy is because the GDBI map is based on location-specific data (individual houses and businesses), while the FCC map considers a whole census block served if just one location in that block is served.

Users can dive into the GBDI Unserved Georgia Map and type in an address or city to see how many locations within each census block are unserved, or check out the FCC vs GBDI comparison map to see the difference in reported coverage. In the GIF below, the GDBI data is on the left, while the FCC’s claimed coverage is on the right.

Equally interestingly, the map shows many areas where even just a handful of miles outside of mid-size metro areas like Athens or Macon, there are plenty of census blocks where half or more of the locations are unserved. This is important because while the lack of connectivity options for rural Americans remains (rightly) a central part of our conversations about equitable access, there are tens or hundreds of thousands of urban Americans who face the same barriers.

The project started last summer with the first three counties done in September of 2019, and we previewed how it showed a distinct difference between FCC-claimed broadband coverage compared to the reality for Georgians at home and at work.

The GDBI Mapping Project was a collaborative effort between private providers and the Georgia Broadband Office within the Department of Community Affairs (DCA). It currently covers all 159 counties and accurately represents location-specific service to all premises, including homes and businesses. By definition, the GDBI determines that if 20% of locations cannot subscribe to basic broadband, that census block is defined as unserved. Local governments and Internet Service Providers (ISPs) can petition the GDBI to make changes to the location- or census-block level data, though the initiative will make the final ruling. As a companion to the project, the GDBI also developed a set of criteria which make up the Broadband Ready Site Designation. In their words its intent is to indicate that “a local unit of government has taken steps to reduce obstacles to broadband infrastructure investment.” This includes things like streamlining rules and reducing barriers for easements and pole limitations as well as speeding up timelines. Communities that meet this threshold can use the Broadband Ready Community designation as a draw for potential providers. See the model ordinance here [pdf], or below.

The biggest limitation of the mapping project is that it only shows access to 25/3 service. This means there’s no way for users to tell if that connection is DSL, cable, or fiber. Relatedly, it also doesn’t show competition, prices, or adoption rates. Still, it’s a huge improvement over the level of detail Georgia communities had before.

This is important for communities or providers seeking funding sources (like the USDA’s ReConnect program and the upcoming FCC RDOF auction) especially as advocates and state leaders emphasize the impact of the pandemic on connectivity for rural areas and student populations.

I am proud of the commitment from broadband providers and their collaboration with the state’s broadband team. This innovative map will enable the private sector to better see where Georgians lack access to high-speed internet, improve open-market competition, and help providers explore partnerships to address the connectivity needs of our state.

Christopher Nunn, the Department of Community Affairs Commissioner, highlighted the importance of having more fine-grained data for municipalities both small and large:

Not only should the new mapping tool help stimulate private investment, but it also enables us to support local communities and track progress toward serving the unserved.

See our previous coverage of broadband expansion efforts in Georgia here, or listen to Christopher and Hank Blackwood of Dalton’s OptiLink municipal fiber network discuss the impact of having robust community broadband in Episode 332 of the Community Broadband Bits Podcast below.

Cover image and GIF of broadband coverage in Georgia from the Georgia Broadband Deployment Initiative.

This article was originally published by MuniNetworks.org. Read the original here. 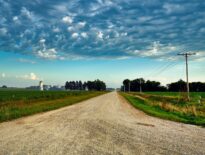 MuniNetworks From Ames to Waterloo: An Update on Community Broa… 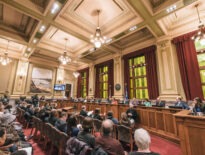 MuniNetworks Is Your City Allowed to Close the Digital Divide D…