Energy Self-Reliant States estimates the amount of electricity that can be generated in each state by solar and wind.  Its dramatic conclusion is that at least half the fifty states could achieve electricity self-sufficiency. “T. Boone Pickens, Al Gore and some environmental groups are arguing that $60 billion be spent on a new 19,000 mile national high voltage transmission network for the nation to reach a 20 percent renewable electricity goal,” says ILSR Vice President David Morris.  “Our study indicates that all states could meet over 25 percent of their electrical needs from homegrown solar and wind energy from inside their borders.”

“Renewable energy falls almost everywhere and should be harnessed almost everywhere”, notes ILSR Research Associate John Farrell, one of the report’s authors. “Especially since, as our studies indicate homegrown and locally owned renewable power is almost always cheaper, especially when you factor in social, environmental and economic benefits.”

Another recent report by ILSR and the North American Water Office (NAWO) suggests that upgrading the existing transmission system rather than building a new transmission system is the least cost way to expand renewable energy. Meeting Minnesota’s Renewable Energy Standard Using The Existing Transmission System relies on recent, pathbreaking studies by utilities estimating the amount of dispersed, renewable electricity that can be injected into the existing transmission network.  “The data make a strong case that Minnesota regulators should put the brakes on new very costly long-distance transmission lines and instead focus on how the existing grid can be utilized more efficiently to support community based energy projects,” says John Bailey of ILSR, one of the report’s authors.

Minnesota’s Renewable Energy Standard (RES) requires 25 percent of state electricity consumption be generated from renewable resources by 2020. “The utility studies strongly suggest that this new capacity can be met from dispersed, in-state renewable power projects integrated into the existing transmission system with strategic enhancements at a cost that’s a fraction of the price for high voltage lines being proposed by regional utilities”, says George Crocker of NAWO.  “All states should require their utilities to undertake a similar study.”

Taken together, the two reports make a strong case that states should first use in-state renewable resources to meet internal needs and upgrade their existing transmission and distribution networks to enhance the development of widely dispersed renewable energy projects.

About ILSR and the New Rules Project: Since 1974, ILSR has worked with citizen groups, governments and private businesses in developing practices that extract the maximum value from local resources.  A program of ILSR, the New Rules Project was designed to build community by supporting humanly scaled politics and economics. More at http://www.ilsr.org 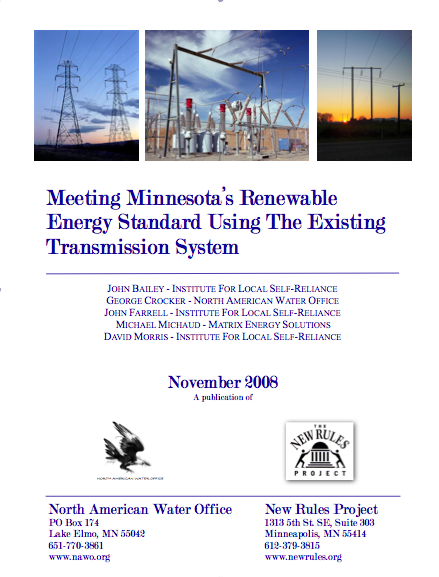