When the country’s giant banks were teetering on the verge of collapse during 2008’s financial crisis, the U.S. government stepped in to bail them out. The banks were, in a phrase that has since become infamous, “Too Big To Fail.”

Would the government do it again? And does the expectation that it would step in give megabanks an unfair competitive advantage over local community banks?

Those are the questions at the heart of an eagerly awaited report released at the end of July by the Government Accountability Office, a nonpartisan federal department. In a conclusion that highlights the need for more regulatory action to reduce concentration in the banking system, the G.A.O. found that the answers to both questions are “yes.”

Six years after the bailout, the country’s biggest banks have only grown bigger. Just four megabanks, each with more than $1.5 trillion in assets, control 45 percent of the country’s banking industry, up from 37 percent in 2007, according to FDIC data. The consequences for the economy — higher consumer fees, fewer small business loans, and more risky speculative trading — are substantial.

To Senators David Vitter, a Republican from Louisiana, and Sherrod Brown, a Democrat from Ohio, these are among the signs that “Too Big To Fail” works as a kind of implicit insurance — and as such, a subsidy — for the megabanks. Because creditors and investors believe taxpayers will rescue the banks if anything goes awry, they are willing to finance big banks at much lower interest rates than they offer smaller institutions.

The Senators have introduced a bill, the “Terminating Bailouts for Taxpayer Fairness Act,” that aims to end this implicit government subsidy, and create a fairer playing field for community banks.

The Senators are also the ones who called for the G.A.O. report, in order to get a better sense of just how big the megabanks’ advantage is.

In the report, the G.A.O. looked at one particular benefit that the taxpayers’ guarantee nets the megabanks: whether they’re able to borrow money – issue debt – more cheaply than smaller financial institutions. Using 42 models, the G.A.O. found that though the benefit has tapered off in recent years, during the heart of the financial crisis, in 2008 and 2009, megabanks were able to borrow at significantly lower rates.

Since the release of the report, the financial industry has tried to spin these results in its favor, arguing that though the advantage once existed, recent reforms, like the Dodd-Frank Act of 2010, have ended it.

That reading, however, misses the full picture. It makes sense that in the current stable economy, unworried creditors view banks as on an even field, and the advantage of the government’s backing drops. But the G.A.O. study shows that the value of the government’s guarantee soars during times of crisis, when creditors are more concerned about a bank’s backup plan. In other words, when we again hit turbulent financial waters, the biggest banks will benefit – a mechanism that not only undercuts smaller institutions, but rewards the megabanks’ risk-taking.

“[The] report confirms that in times of crisis, the largest megabanks receive an advantage over Main Street financial institutions,” Sens. Brown and Vitter said in a joint statement. “Wall Street lobbyists may try to spin that the advantage has lessened. But if the Army Corps of Engineers came out with a study that said a levee system works pretty well when it’s sunny – but couldn’t be trusted in a hurricane – we would take that as evidence we need to act.”

In a Senate Banking subcommittee hearing the day after the report’s release, experts testified to the scale of the subsidies. One, taxpayer guarantee authority Edward J. Kane, argued that the G.A.O study looks at only one benefit, and that other benefits the megabanks receive from the government’s backing – for instance, paying their stockholders lower returns – mean that the value of the subsidy is even greater.

The G.A.O. report underscores the need to eliminate Too Big To Fail policies, and the “advantages and distortions they create,” as Sen. Brown said at the hearing. To do this, Sens. Brown and Vitter have proposed a series of changes in the “Terminating Bailouts for Taxpayer Fairness Act” that would sharply reduce the possibility of government bailouts for megabanks in the future.

The bill would require the largest banks — those with more than $500 billion in assets — to rely on equity capital for at least 15 percent of their funding. That would effectively put investors, rather than taxpayers, on the front lines should a megabank sustain large losses. The largest eight U.S. banks currently derive only 5 percent of their funding from shareholders, according to the FDIC.

In the wake of the G.A.O. report, Sens. Brown and Vitter are renewing their call for change. “Unless you think we can eliminate financial crises forever,” Sen. Brown said at the hearing, “the G.A.O.’s report is another reminder that we have more work to do.” 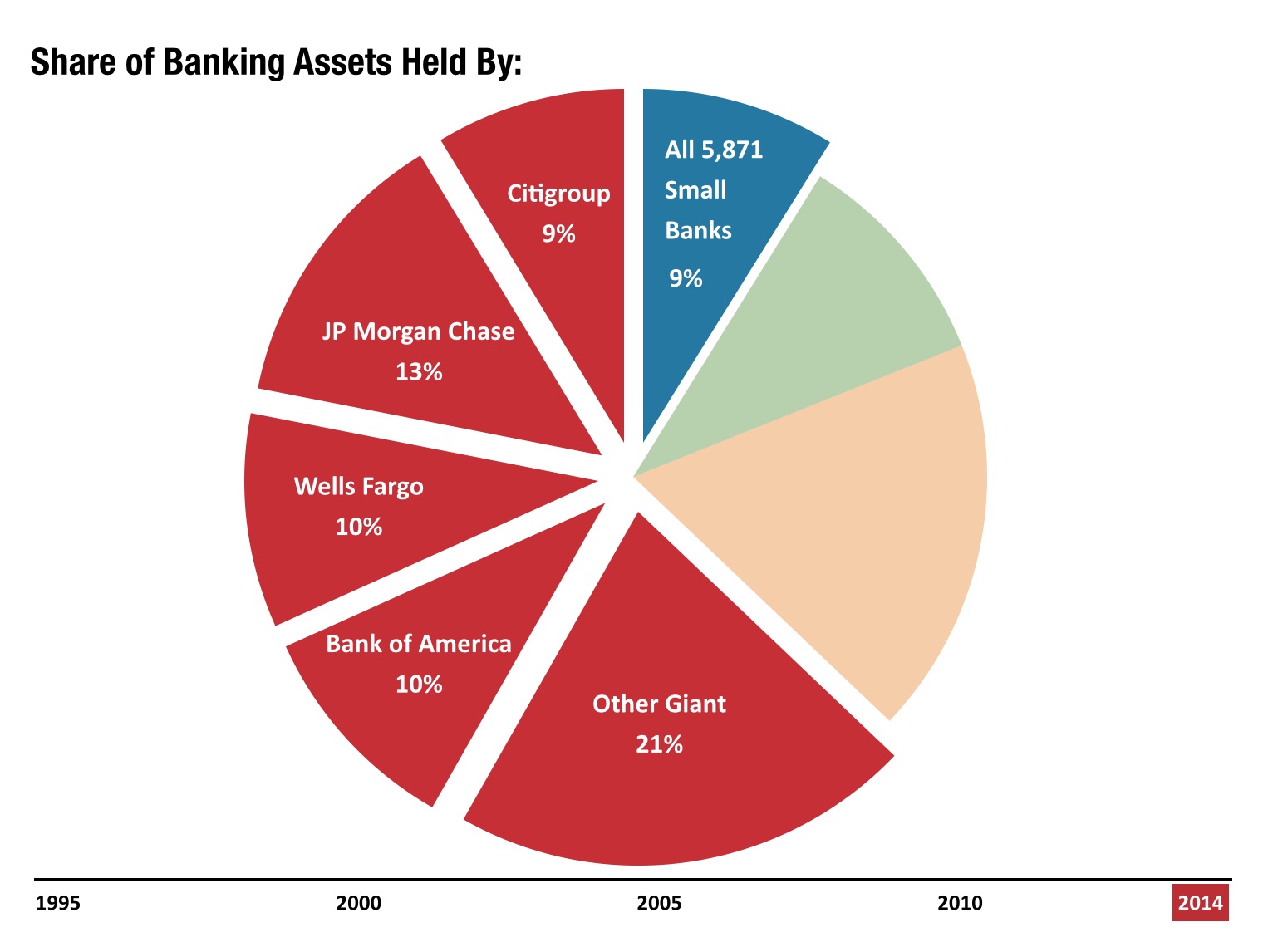 Banking Just How Concentrated Is Our Banking Sector? [Vide…