Frustrated with monopoly utility Xcel Energy, clean energy advocates in Boulder, Colorado came together to form Empower Our Future. The organization emphasizes the value of local determination and, as Boulder moves forward in its relationship with Xcel, serves as a resource for accountability and oversight.

Learn more about Boulder’s (failed) effort to municipalize its electric utility in episode 15 of the Local Energy Rules podcast.

On November 11, 2021, ILSR Co-director and Director of the Energy Democracy Initiative John Farrell presented on Empower Hour (an educational series hosted by Empower Our Future).

In the presentation, he poses a question: is a franchise a failure? Rather than municipalizing, Boulder has signed a new franchise agreement with Xcel Energy.

Minneapolis was faced with a similar choice in 2014. At the expiration of its own franchise agreement with Xcel Energy, Minneapolis organizers (including Community Power and John Farrell) explored the possibility of municipalizing. They settled on the Clean Energy Partnership: a compromise between the city and the utility. In continuing Minneapolis’s relationship with Xcel Energy, the utility would help the city reach its clean energy goals.

The presentation also touched on the Value of Solar: a way to compensate someone who generates solar electricity for the grid. The state of Minnesota adopted a Value of Solar policy in 2013, which it paired with its community solar program. In short, rather than net metering, community solar gardens in Minnesota are credited with a special rate that is designed to capture the many benefits of solar energy.

Learn more about Minnesota’s Value of Solar by listening to episode 148 of Local Energy Rules or by reading our 2014 report.

Is a Franchise a Failure? John Farrell Presents to Empower Hour 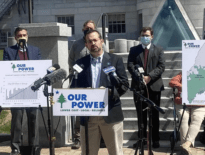 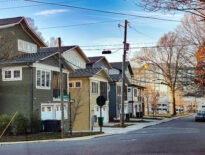