This week marks a milestone for the Local Energy Rules podcast: 100 episodes. Although the times are grim and uncertain, we hope you take refuge in these visions of a cleaner, more equitable future.

For our 100th episode of the Local Energy Rules podcast, we compiled a highlight reel from the Voices of 100% series. This episode celebrates five cities that are working toward our vision: community-driven, equitable, 100% renewable energy economies. As the movement grows, there will only be more voices to share.

Climate Goals for All Utility Types

The Voices of 100% series has featured 18 cities from 16 states. Each city differs in its size, density, and utility type. Although these differences may affect their goals and the timelines by which they are able to achieve them, any city can aspire to provide 100% renewable energy — regardless of how much local control it has over a utility.

In the second episode of the series (and first of this podcast), Farrell interviews Larry Atencio, a City Council Member of Pueblo, Colo. Pueblo gets its electricity from the investor-owned Black Hills Energy, which bought out the previous bankrupt utility. Atencio describes how Black Hills took over, built a gas-fired power plant, and raised prices for customers. Although Pueblo has some oversight over the utility in the form of Colorado’s Public Utilities Commission, the commission approved the gas plant and rate increase. Atencio and the City began to look at options to reduce these prices.

After considering municipalization, the city landed on renewable energy as the best way to save money. Attencio was the one to propose the 100% resolution to the council.

We might be able to have some money left over from our energy costs, if we go 100% renewable, to be able to put into the neighborhoods.

In contrast to Pueblo, Georgetown, Tex. owns its electric utility. In fact, because of local ownership, the City began providing 100% renewable electricity in 2016. Farrell asks Mayor Dale Ross about how Georgetown was able to achieve this goal in the very first Voices of 100% episode.

Georgetown’s achievement was celebrated by environmentalists, but the city did not switch to wind and solar because of their lower carbon footprint. Rather, the decision was an economic one. As the city-owned utility had expiring contracts with its power providers of the time, it became apparent that wind and solar were the cheapest power source. Plus, they could sign long-term contracts that would ensure stable prices long into the future.

What we decided was we wanted two things to happen. One, we want to limit the volatility in the market in the short term. And we also wanted to have an energy source that mitigated regulatory and governmental risks. And the only thing that fit those two items was wind and solar.

In the 17th episode of the Voices of 100% series, Providence Director of Sustainability Leah Bamberger explains how her Rhode Island city upended the typical city planning process. It reflects the power of cities to focus on what their residents care about most, even when holding goals in common. She stresses the value of a “systems thinking” approach and intentionally reaching out to stakeholders.

Before embarking on an implementation plan for Providence’s climate goals, the city created a racial and environmental justice committee to serve as the “steering committee” for the city’s work. With the help of the committee, the city was able to define what a frontline community is in Providence and the energy issues that most affect these communities: working conditions, housing affordability, and public health.

We can’t just be talking about calculating greenhouse gas emissions and our carbon footprint and wedging our way down to zero. We have to be really thinking about the systems and structures that created this crisis in the first place. And that’s what I think this plan gets at, not because that was necessarily our intention, our intention was the center frontline communities in the conversation, but because we did that, we ended up with a much more holistic approach and plan.

A Stewardship Appeal for Any Political Climate

Although 100% renewable pledges are prevalent in blue states like California and Massachusetts, saving energy costs and improving public health are apolitical. These are the reasons why Columbia, S.C., Mayor Stephen Benjamin made a commitment to 100% clean and renewable energy in 2017. Benjamin talks about his decision to take action on climate in the South in a 2019 interview for Local Energy Rules.

Benjamin cares deeply for his family, city, and community. He believes in being a good steward of Columbia’s resources, and because of this, residents trust him to address health and equity issues in the city. He committed to 100% renewable energy because he knew it would create economic opportunity in Columbia. As the city approaches this goal with intentionality, Benjamin hopes Columba will become one of many “cities for all people.”

We’re able to do those things here locally because we’re good stewards of people’s money and we think big. We speak to building a community that everyone wants to live in and we’ve been able to find some unanimity of purpose as a result of it.

Utilities Can Be Entrepreneurs

Mayor Weinberger oversaw the hydro-electric energy purchase that put Burlington over its 100% renewable threshold, but he acknowledges that the drive for clean energy started long before he was in office. With public support and a utility that is accountable to the public, it was only a matter of time before Burlington reached that milestone. Now, Weinberger and the city are developing programs that ensure no one is left behind in the transition to a clean energy economy.

I think it’s not an accident that it was a city with a publicly owned utility that got there first. And I say that because I’ve come to think there were really two essential ingredients to reaching the goal. One was political will… The other element of it was excellent technical expertise at the Burlington Electric Department.

Just setting the goal and getting it out there, that that’s a shared goal… is a really powerful tool. I think on the utility side, I agree completely that there are opportunities for innovation with investor owned utilities as well as public power as well as cooperatives.

Find the full interviews that are featured in this episode:

This is the 19th episode of our special  Voices of

series, and 100th of Local Energy Rules, an ILSR podcast with Energy Democracy Director John Farrell, which shares powerful stories of successful local renewable energy and exposes the policy and practical barriers to its expansion. 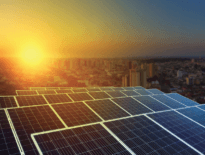