Solar energy now accounts for more than 10% of electricity in five states. California’s Assembly passed a bill committing the state to 100% renewable energy sources by 2045. In Utah, rooftop solar installations dropped 23 percent in one year due to the rollback of net metering. Across the country, 19 city mayors signed a pledge to ensure buildings operate at net-zero carbon.

Modernizing renewables mandates is no longer about the megawatts by Herman K. Trabish, Utility Dive

The EPA said the shift will result in 1,400 additional premature deaths each year due to pollution. But here’s what it didn’t say: the EPA’s own research shows that those deaths will fall disproportionately on poor and minority communities in places like southwestern Pennsylvania, West Virginia, and Missouri.

RMI found the coop’s customers could save over $600 million through 2030 if the co-op integrated more renewable energy resources instead of relying on its array of fossil fuel power plants. The savings could be realized by avoiding the operating expenses and fixed costs of the coop’s fossil-fuel power plants.

Distributed storage to yield $2-3 of grid savings for each dollar spent by William Driscoll, PV Magazine

This Coal State Holds The Key To 100% Renewable Energy by Tina Casey, CleanTechnica

Solar now makes up more than 10% of electricity in five states by Christian Roselund, PV Magazine

Massachusetts has joined California, Hawaii, Nevada and Vermont in the club of states where solar represents 10% or more of in-state generation. Solar made up 2.4% of total generation in the United States during the first half of 2018, with solar and wind together making up slightly less than 10%.

The U.S. is on the verge of an offshore wind revolution By Jan Ellen Spiegel, Yale Climate Connections

Mayors from 19 cities signed the Net Zero Carbon Buildings Declaration on Thursday, a pledge to ensure new buildings operate at net-zero carbon by 2030, with all buildings following suit by 2050. The mayors have also pledged to “owning, occupying and developing only assets that are net-zero carbon in operation” by 2030. 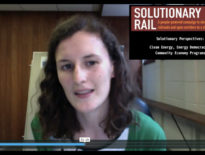