Utilities have a problem: the public wants 100% renewable energy, and quick by David Roberts, Vox

Renewables are a public opinion juggernaut. Being against them is no longer an option. The industry’s best and only hope is to slow down the stampede a bit (and that’s what they plan to try).

Solar isn’t accessible to half of Americans. Can community solar change that? By Justine Calma, Grist

New York is among the top dozen solar-producing states in the U.S., but in 2014, less than 4 percent of solar installations benefited New York households with incomes below $40,000.

As Storms Bear Down, More Homeowners Look to Batteries – Not Generators – for Backup Power by Alan Neuhauser, U.S. News

Solar and energy storage, either on their own or as part of clean energy portfolios, are showing that they can compete with natural gas in the United States. But will regulators wake up to this reality before half a trillion dollars worth of future stranded assets are built?

How solar power saved $6.7 million on a Tuesday by John Weaver, PV Magazine

Why Minnesota’s Community Solar Program Is The Best by John Farrell, CleanTechnica

A New Credit Union Aims To Lower The Cost Of Clean Energy by John Farrell, CleanTechnica

California has a 100% clean energy goal, but not the laws to get it there, critics say by Herman K. Trabish, Utility Dive

End of ‘Net-metering’ Casts Shadow Over Future of New York Solar by Lydia McMullen-Laird, The Indypendent

Replacements to the controversial solar incentive have cropped up in Hawaii, California and elsewhere, but policymakers have struggled to devise a replicable model.

Tri-State Generation and Transmission still gets half its power from coal, even as co-op owned and purchased solar is reaching nine times what it was in 2013. A new report shows Tri-State, already the biggest supplier of solar among U.S. generation and transmission (G&T) co-ops, can lower customer bills by increasing its procurement of wind and solar, despite its existing coal investments.

Two Ways Energy Storage Will Be A True Market Disruptor In The U.S. Power Sector by Eric Gimon, Forbes

The Next Financial Crisis Lurks Underground by Bethany McLean

For EVs to Really Get Traction, Home Charging Needs to Be an Option by Skip Descant, GovTech

“Home location charging is the most frequently used and the most influential in the purchasing decision and the vehicle usage,” said Gil Tal, research director with the Plug-In Hybrid & Electric Vehicle Research Center, within the Institute of Transportation Studies at the University of California, Davis.

The United States installs 7 million pounds per day of solar panels, according to the National Renewable Energy Laboratory, a pace that secures only fourth place among countries for installed capacity. Those panels are built to last 30 years, which foretells a huge demand for recycling decades ahead and an increasing demand sooner, as some panels succumb to damage or fall short of their warrantied performance.

Why Energy Data Will Unlock the Next Wave of Residential Solar, GreenTech Media 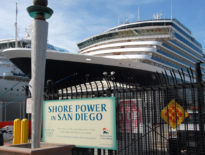