States are stepping up to the plate to combat climate change. Despite a focus on federal level change, most policy progress has actually happened at the state level. This week, Massachusetts joined their ranks in a big way by introducing legislation requiring 100 percent renewable energy by 2035. Plus, New Mexico joins 18 other states in a national renewable energy coalition.

These governors are showing what happens when you campaign on climate action and win by David Roberts, Vox

Since climate change was first introduced to US politics, most attention and debate have focused on a federal solution, but most actual policy progress has taken place at the state level. States are where everything from cap-and-trade systems to renewable energy mandates have actually become law.

The Solar Revolution Is Coming—But It’s Skipping Over Communities of Color by David Grossman, Popular Mechanics

Electric Vehicles Could Cost the Same as Gasoline and Diesel Cars by 2021: Report by Stephen Edelstein, The Drive

According to the study by research firm Deloitte, EVs could cost the same as internal combustion cars by 2021.

Are Electric Cars Only for the Rich? Sacramento Is Challenging That Notion by Bradley Berman, New York Times

A question being posed across the United States: should farmers devote some, or even all, of their land to solar energy?

A House panel on energy policy took up discussion Thursday of a bill from Democratic state Rep. Sheryl Williams Stapleton to channel 1 percent of a $5 billion trust fund toward investments in solar and wind energy

Shop for electricity? Florida voters could decide in 2020. by Samantha Gross, Miami-Herald

Plugging into Electric Vehicles in the Tar Heel State by Dory Larsen, Cleanenergy.org

Is 100% renewable energy for the US possible? Yes by Grant Smith and Bill Walker, Utility Dive

Should the nation as a whole shoot for such an ambitious goal? Is it even possible for the entire U.S. to supply electricity reliably with 100% renewable energy sources?

The vision — big cities with EVs powered by turbines dotting the Great Plains — is widely shared. But how to get there isn’t clear just yet.

Climate change will impose the greatest economic losses on Republican-leaning areas of the country that are almost uniformly resisting new efforts to combat it, according to a sweeping new study released Tuesday. 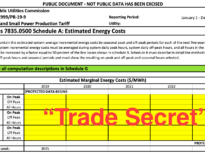 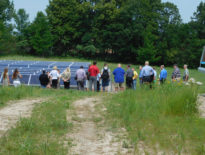