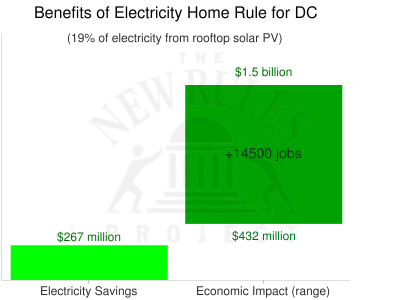 Update 8/11/11: While maximizing solar in DC shifts $267 million in electricity payments from the utility to local solar panels, the cumulative electricity cost savings over 25 years amounts to $1.6 billion for ratepayers by shifting to solar power.

For many years the citizens of Washington, DC, struggled for the basic right to elect their own leaders.  In 2011, they should use their political home rule to maximize the economic benefits of local renewable energy with “electricity home rule.”

Currently, residents and businesses in Washington spend over $1.5 billion dollars a year on electricity.  According to a study of DC’s energy dollars by the Institute for Local Self-Reliance, 90% of that amount (largely unchanged since the 1979 study) – $1.4 billion – leaves the city.

With rooftop solar power, DC residents could keep more of those electricity dollars at home.

In its recently published atlas of state renewable energy potential, the Institute for Local Self-Reliance (ILSR) found that the District of Columbia could generate 19% of its electricity from rooftop solar PV systems.  That’s $267 million spent on electricity bills that could be kept locally.

It could go even higher.

A previous NREL study of the value of local ownership of renewable (wind) energy found that it multiplied the economic benefits from 1.5 to 3.4 times.  If D.C. residents maximized local ownership of solar, it could have an economic value as high as $1.5 billion, equivalent to the District’s total electricity bill.

The 1,800 MW of solar would also generate jobs.  With a rule of thumb of 8 jobs per MW, according to a University of California, Berkeley, study of the jobs created from renewable energy development, the District could get as many as 14,500 jobs from maximizing its solar energy self-reliance.

The cost of going solar is minimal.  At current best prices for solar PV (around $3.50 per Watt installed) and with the benefit of the 30% federal Investment Tax Credit, solar PV can deliver electricity to the District for 16.1 cents per kilowatt-hour.  After seven years at current electricity inflation rates (3% per year), solar PV – with zero fuel cost or inflation – would be less expensive than retail grid electricity (currently 13.3 cents per kWh).  And unlike the $267 million currently sent out of the district for that electricity, all of it would be kept at home.

The solar power offers much more than just affordable electricity.  Recent studies have suggested that the actual value of solar power to the grid and environment far exceeds the value of the sun-powered electricity.  And ILSR’s recent report on Democratizing the Electricity System illustrates how solar power and other distributed renewable energy sources are the cornerstone of a transformation to a decentralized, more democratic energy system.

Citizens of DC should take the opportunity presented by their solar resource and pursue electricity home rule.

Electricity Home Rule Could Mean Economic Boost of $1.5 Billion and 14,500 jobs for DC