All over the U.S. utilities are facing increased energy competition thanks to cheaper renewable alternatives including solar and storage options. Consequently, Utility companies in the midwest are struggling to get new gas plants approved. More on this in John Farrell’s new Solar+Storage Report. In South Carolina, legislators and regulators scramble to find a way forward as residents hit the net metering cap. In New England, states are re-examining subsidies to clean energy and net metering all together.

A Solar Power & Energy Storage Revolution Is Upon Us by Jake Richardson, CleanTechnica

An Open Letter To California Energy Commissioners On The Rooftop Solar Mandate by John Farrell, CleanTechnica

The goal of Green the Rez is to implement a regulatory mandate for statewide renewable energy portfolio standards of 50 percent by 2030 for North and South Dakota, which the reservations cross. Campaign leaders also want to move all tribal buildings to renewable energy sources and then transition homes on the reservation to green power as well. The campaign is also working toward pushing North Dakota and South Dakota to enact solar access laws, which would make it easier to install solar panels on homes, and net metering laws, which would allow residents to sell excess solar energy that goes back into the electric grid.

Clean energy is catching up to natural gas by David Roberts, Vox

Around 2015, though, just five years into gas’s rise to power, complications for this narrative began to appear. First, wind and solar costs fell so far, so fast that they are now undercutting the cost of new gas in a growing number of regions. And then batteries — which can “firm up” variable renewables, diminishing the need for natural gas’s flexibility — also started getting cheap faster than anyone expected. It happened so fast that, in certain limited circumstances, solar+storage or wind+storage is already cheaper than new natural gas plants and able to play all the same roles (and more).

Opposition to new fossil power plants from environmental and consumer groups isn’t new. What is changing, however, is the economics of alternatives. Wind and solar costs, aided by federal tax incentives, continue to fall since the IPL plant was approved four years ago; also, there’s a surplus of generating capacity on the grid, and electricity demand continues to erode or at least remain flat.

As states in the Northeast reconsider net metering, a patchwork of new solar policies is emerging along with mixed predictions about their potential impact on solar development.

US home energy storage systems installations hit a record high in the first quarter of 2018. 36 megawatt-hours of grid-connected home energy storage systems were installed during this period, which was the same amount for the first three quarters of the year. Nearly three quarters of the Q1 installations were in California and Hawaii.

APS spends big to keep clean-energy measure off ballot – but what was paid for isn’t clear by Rachel Leingang, Arizona Republic

Rooftop solar could save utilities $100 to $120 per installed kilowatt by Megan Geuss, Ars Technica

Riverside County Supervisors give some residents reason to go solar. IID should cooperate by The Desert Sun Editorial Board, Desert Sun

Pacheco: ‘No excuse’ for House not to act on energy bill by Katie Lannan, State House News Service

More jobs in Nevada’s advanced energy industry than in mining, nearly two times those in education by PV Magazine

Solar for Your Home: Worth Reconsidering in Nevada? By Ktvn, 2News

This Hurricane Season, Puerto Ricans Are Imagining a Sustainable Future by Celia Bottger, The Nation

No Longer a Novelty, Clean Energy Technologies Boom All Across the US by Julia Pyper, Clean Tech Media

A new report and interactive map released this week by Environment America takes stock of U.S. clean energy progress to date. It finds that leadership is no longer concentrated in select parts of the country, but that it is distributed across states with varying economic and democratic makeups.

In a rush to modernize the grid, utilities are finding new ways to innovate by Robert Walton, Utility Dive

“For the first time in probably forever, utilities have to start taking risks in developing new business models, and they have to be prepared to fail,” Navigant Principal Research Analyst Stuart Ravens told Utility Dive. “And then to move on and learn from those failures.

Electric infrastructure – US could create green jobs and clean up the climate with EVs, electric high-speed rail by Meteor Blades, Red Green and Blue

This week the National Renewable Energy Lab issued a report on the factors that will affect the country’s electricity demand through 2050,” writes Dan Gearino. “Most of the major categories of electricity consumption are projected to have modest but steady growth. Then there is transportation, the ultimate wild card. The report shows that EVs would become 11 percent of the vehicle fleet under a base scenario, and range all the way to 84 percent of the fleet under a high-adoption scenario.

A Snapshot of the US Market for Smart Solar Inverters by Jeff St. John, GreenTech Media

A white paper released this week from New Democracy, a group of 40 centrist Democratic governors, members of Congress and state officials, argues that Democrats in purple and red regions must embrace all forms of clean energy, including shale gas and nuclear, and emphasize that they alone can deliver U.S. energy abundance and climate protection together, to win back majorities.

Every State in New England is Reconsidering Their Subsidies to Solar Power by Jason Hopkins, The Daily Caller 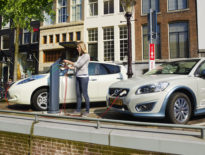 Energy What to Consider When Planning for Electric Vehicl… 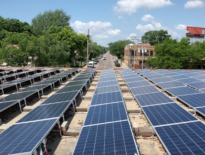