For this Voices of 100% episode of the Local Energy Rules Podcast, host John Farrell and guests Kate Beaton and Ned Noel examine Eau Claire’s clean energy goal, the citizen participation that has supported its work, and the strategies the City is using to advance renewable energy.

For this episode of our Voices of 100% series of the Local Energy Rules Podcast, host John Farrell speaks with Eau Claire City Council Member Kate Beaton and Senior Planner Ned Noel. Eau Claire, Wisc. has focused its efforts on building successful community gardens to achieve its clean energy goals. They examine Eau Claire’s clean energy goal, the citizen participation that has supported its work, and the strategies the City is using to advance renewable energy.

Eau Claire, a small midwest city located in Wisconsin, has set ambitious goals for its community. By 2050, the City of Eau Claire plans to run on 100 percent clean energy. In the meantime, by 2030, the Eau Claire community hopes to have at least 30 percent of its energy come from renewable sources. The key to the city’s success? Solar gardens.

Beaton’s collaborator, Senior Planner Ned Noel, emphasizes the importance of “thinking about systems and interconnections” when it comes to building renewable energy infrastructure.

Hired in 2007 by the City of Eau Claire, Noel is constantly examining how energy connects with other structural challenges the city faces. The public has called for sustainability and for leadership to invest in a more concerted effort to continue renewable energy programs. Noel responds to this call and plays an important role in helping the city meet its goals. Together, Beaton and Noel have made significant steps toward accomplishing the city’s renewable energy goals by 2050.

In 2016, Eau Claire partnered with the Minneapolis-based utility company Xcel Energy to build a 3,000 panel solar garden. This solar garden has given Eau Claire hope and motivation to reach its goal of getting 100 percent of its electricity from renewable sources. Some of the advantages of building solar gardens are that the costs are “paid for by the investments of individuals and businesses that will recoup their investment by selling the energy back to the electric grid.”

To build off of this momentum, Beaton and Noel are excited for the financial support that will come to Eau Claire this year from the federal government and have begun brainstorming on how to best allocate these resources. Some of the infrastructure projects Beaton and Noel hope to invest federal funding in are a revolving loan fund to save on energy upgrades, EV charging stations, a geothermal energy source for the city library, and a microgrid at Eau Claire’s water treatment plant.

The Role of Community Advisory Groups

One main resource the City of Eau Claire draws on is the city advisory group. Composed of more than 40 residents, the advisory group is involved deeply in developing and implementing Eau Claire’s sustainability plan. For example, partnerships with the Chippewa Valley Home Builders Association have allowed the city to set net-zero energy building guides.

In addition, the advisory group has organized other small cities in Wisconsin to build a broader advocacy network. Building this advocacy network has been crucial in Beaton’s day-to-day tasks, which include advocating for resources for local communities and strategizing the state budget’s climate action planning money.

Without community action, Eau Claire would not be where it is today. – Kate Beaton

This is the 30th episode of our special  Voices of

series, and episode 134 of Local Energy Rules, an ILSR podcast with Energy Democracy Director John Farrell, which shares powerful stories of successful local renewable energy and exposes the policy and practical barriers to its expansion. 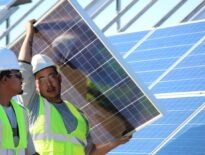 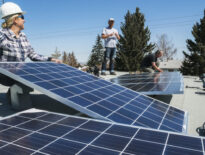