Colorado, a long-time hub of hiking and skiing, has become the unexpected hub of clean energy commitments. In a swing state often divided over political issues, what makes renewable energy so popular?

For this episode of our Voices of 100% series of the Local Energy Rules Podcast, host John Farrell speaks with Lissa Ray and Monique DiGiorgio about Durango, Colo.’s recent commitment to 100% renewable electricity by 2050. Ray, a climate activist, organized the residents of Durango as the point person for the Sierra Club. DiGiorgio, Managing Director of Local First in La Plata County, rallied local businesses for the cause. Farrell asks the two for lessons learned through their work on Durango’s Ready for 100 campaign, the benefits of making the commitment in rural Colorado, and advice for other organizers looking to do the same.

Listen to the full episode to learn what cities served by rural electric cooperatives can do to strengthen democracy in their community, and explore more highlights and resources, below — including a transcript and summary of the conversation.

With 12 cities committed to 100% renewable electricity or energy, Colorado residents have been very receptive to the Sierra Club’s Ready for 100 campaign. One of these commitments came from the small city of Durango, population 18,500, in the southwest corner of Colorado. Climate activist Lissa Ray worked on the campaign to secure a commitment, which as she describes, was the culmination of more than a decade of organizing. Ray attributes the ultimate success of a 100% renewable commitment to Colorado’s Initiative 37.

The ballot measure, called the Colorado Renewable Energy Requirement, put in place a gradually rising renewable energy portfolio for the state’s utilities. It also mandated net metering. The initiative passed in 2004, after which Lissa says renewable energy advocates got to work in Durango. However, they were soon to face an obstacle in their electric cooperative (co-op) and its elected board.

Many small, rural cities across the U.S. are served by electric cooperatives. Co-ops, in contrast to investor-owned utilities, have members rather than customers and are governed by an elected board of supervisors. Although this is a more participatory structure than a privately owned company, many co-ops are still far from democratic.

See this 2016 report for more on energy democracy in electric cooperatives.

Ray says that board members of La Plata Electric Association (LPEA), the co-op serving Durango, were all long-standing members resistant to change. As only 6% of co-op members actually voted for their representatives, it took Ray and other organizers years to shake up the constitution of the board. Eventually, they were able to increase votership to 25% — one of the highest election turnouts of any co-op in the United States. A majority of board members are now renewable energy advocates.

With the co-op board on their side, organizers in Durango were able to secure a commitment to 100% clean, renewable electricity by 2050.

Monique DiGiorgio, Managing Director of Local First in La Plata County, organized the community toward its renewable energy commitment from a different angle. At Local First, DiGiorgio represents 270 local businesses united by a triple bottom line: people, the planet, and prosperity for everyone.

A total of 222 businesses, including a majority of the Local First independent business alliance, signed on to the 100% renewable electricity commitment. DiGiorgio explains that businesses understand both the importance of renewable energy to the local economy and its climate benefits:

Many business owners, especially the local independent ones, are really going to see that economic case and the holistic view of local renewable energy and be very supportive.

Durango’s co-op, La Plata Electric Association (LPEA), buys its power from Tri-State Generation and Transmission (Tri-State). Farrell calls Tri-State the “co-op of co-ops,” because it is also a co-operative utility. Tri-State sells electricity to 43 small co-ops in four different states, one being Durango’s La Plata Electric. LPEA is under contract to buy 95% of its electricity from Tri-State for the next 40 years. With a contractual limit to  generate no more than 5% of their energy locally, and Tri-State’s weak commitment to renewable energy, something in Durango must change for the community to reach its commitment.

In the interview, Farrell mentions a Rocky Mountain Institute report that shows specifically how Tri-State could lower customer costs by switching to more renewable energy. However, Ray argues that with a coal mine it purchased 10 years ago and the Holcomb coal power plant (owned by the Sunflower Electric Co-op) in Kansas, Tri-State has too much invested in the status quo.

Durango applied to increase its share of locally produced energy, for example, but was rejected by the Tri-State board. Other communities, facing a similar rejection, have opted out of the cooperative association. Kit Carson Electric Co-op in New Mexico bought its way out of Tri-State, at a hefty exit price: 37 million dollars. More recently, the Delta-Montrose Electric Association attempted to leave Tri-State. When Tri-State named a much steeper price, Delta-Montrose took it to the courts. Ray reports that La Plata may follow suit, having studied the possibility of a buyout and formally asked Tri-State for a price.

We have asked Tri-State formerly to give us a price to buy out our contract.

Durango’s Options Beyond the Utility

After securing a 100% renewable electricity commitment in Durango, DiGiorgio is encouraged that the City will do more.

When you see your voice really be heard at that level, I think it really shows that our democracy is working. And that each individual can make a difference.

Despite La Plata’s obligations to Tri-State, Durango has some negotiation tools to put the pressure on both. First is the city’s franchise agreement with La Plata. Through the franchise agreement, La Plata collects a fee from electric customers that ultimately goes into the city’s general fund. In return, La Plata is free to maintain the grid without being tied up in endless permitting applications.

When the franchise fee expired eight years ago, the city put a clause in the renewed agreement that should allow the city to buy electricity elsewhere. Ray hopes this will allow Durango to expand the 5% of energy it can generate locally under Tri-State.

Could your city use a franchise fee to leverage power over the utility? See ILSR’s Franchise Fee Authority map.

DiGiorgio hopes that La Plata’s business model will keep equity at the forefront as Durango transitions to 100% renewable electricity. As a member-owned, non-profit co-op, members can speak to the board once a month at its public meetings. DiGiorgio believes that participation and dialogue around renewable energy has increased in the last few years, with members often bringing up the health and equity benefits of clean energy.

As electricity prices keep increasing, Ray believes renewable electricity could stabilize and even lower the costs of electricity for all in Durango.

Another option many utilities have turned to is the pay-as-you-save model, which Farrell brings up in the interview. Through pay-as-you-save––also known as inclusive energy financing––the utility will finance energy efficiency upgrades and the customer can pay for them over time on their energy bill. However, Ray says that La Plata tried offering on-bill financing like this four years ago. A Durango bank helped to finance energy efficiency upgrades for La Plata customers, but there were very few takers (if the program was based on personal loans and not well advertised, there may still be an opportunity for inclusive financing).

Advice for Other Organizers

DiGiorgio’s last advice for other communities rallying for 100% renewable energy is approaching local businesses. Making the economic case, paired with environmental and equity benefits, should be enough to convince business owners to sign on.

As for Ray, connecting with individuals seems to be the best way to get things done:

Because you’re meeting people and talking to them about things that are important to them and you create this connection and this network and a confidence in people and that snowballs and starts to get bigger and bigger.

For additional background on the issues discussed, check out:

This is the 15th episode of our special Voices of

series, and 88th of Local Energy Rules, an ILSR podcast with Energy Democracy Director John Farrell, which shares powerful stories of successful local renewable energy and exposes the policy and practical barriers to its expansion. 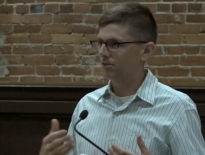