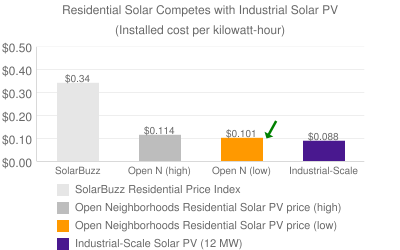 Distributed solar photovoltaic (PV) proponents have recognized that solar is not without economies of scale – larger installations generally have lower installed costs per Watt of peak capacity.  But new data suggests that these economies are significantly smaller than previously believed.  This is good news for solar and great news for the renewable energy movement.

First let’s discuss the conventional wisdom, illustrated by the SolarBuzz Solar Photovoltaic Price Index.  In their September 2010 index, they showed the following price differential for solar PV in sunny locations.  Production is based on a solar insolation of 5.5 kWh per square meter per day, with a total system efficiency (including the DC to AC conversion) of around 75%.

These figures are buttressed by data from the California Solar Initiative, which showed the average price for solar PV installs under 10 kW rising from $8.93 to $9.61 from 2005 through 2008, with data from over 15,000 solar installations.  Data from the state of Minnesota’s solar rebate program showed installed costs of around $10.00 per Watt from 2006-2009.

But the new data on residential solar installation costs suggests that people may have significantly overpaid or that prices have fallen precipitously.

A national business called One Block Off the Grid (1BOG) routinely obtains a 15% discount for its neighbor-organized buying groups.  Three companies that provide solar leasing for the residential market – SolarCity, SunRun, and Sungevity – have installed costs (before any federal, state or utility incentives) of $5.00 to $6.00 per Watt.  Mt. Pleasant Solar Cooperative in Washington, DC, successfully negotiated prices on 50 to 100 residential solar PV installations down to $5.50 per Watt (or lower).  And finally, a Los Angeles cooperative called Open Neighborhoods recently announced a residential PV cooperative solar buy for $4.78 per Watt, almost identical to the SolarBuzz price for industrial scale (500 kW) installations.

Buying groups, solar leasing programs and community solar projects are knocking prices down from $8 to $10 per Watt installed to under $5 per Watt – a 50 percent discount!

The Los Angeles Open Neighborhoods program shows that residential PV can be installed for $4.78 per Watt (with enough participants, the price will actually be just $4.22 per Watt!).  Industrial-scale PV has also gotten cheaper, but not by the same margin.  A recently completed 12 megawatt (MW) project in Ohio had an installed cost of $3.66 per Watt.  Southern California Edison (SCE) is putting up 250 MW of distributed rooftop solar PV for $3.50 per Watt.  When put in price per kilowatt-hour, the differential between the Open Neighborhoods residential solar array (with a high participation rate) and the completed Ohio 12 MW project is only $0.013 per kWh – less than 10 percent of the previous split! 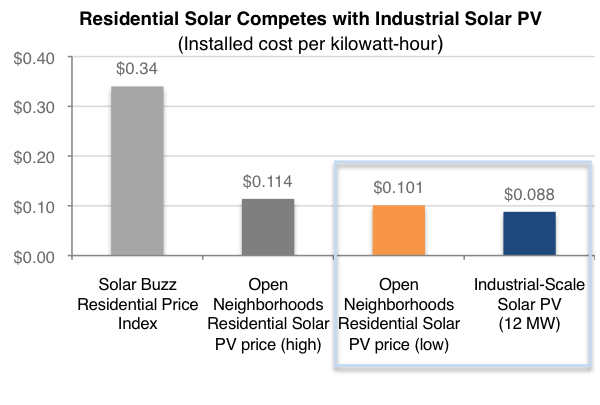 The shrinking economies of scale for solar PV are good news for solar, but great news for renewable energy.  Opposition to new, high-voltage transmission lines presents one of the major roadblocks to expanding (centralized, remote) renewable energy projects.  But instead of waiting years for new transmission lines or open space, rooftop PV can be built fast (the Germans installed 3.5 GW last year), can economically compete with industrial-scale solar and can supply 20-50 percent of electricity in every state.  It’s time to go solar and rapidly expand distributed generation in America.