Monopoly electric utilities are digging their heels in; warding off competition and protecting their market power by any means necessary. Despite the vast resources of their opponents, several U.S. communities have won recent battles for energy democracy.

For this episode of the Local Energy Rules Podcast, a rebroadcast from the Building Local Power Podcast, we share a recording of ILSR’s recent event Democratizing Power: New Citizen Initiatives Challenge Monopoly Electric Utilities. In the January 2022 event, ILSR’s Stacy Mitchell and John Farrell facilitated a conversation with four advocates. The conversations center around how communities have challenged monopoly power using many tactics, including a ballot initiative, antitrust litigation, and grassroots organizing.

On January 20th, the Institute for Local Self-Reliance hosted a webinar titled Democratizing Power: New Citizen Initiatives Challenge Monopoly Electric Utilities. Over the course of the hour, panelists shared their stories of democratizing the electricity sector through three case studies: a ballot campaign for a consumer-owned utility in Maine, an antitrust lawsuit in Arizona, and the grassroots effort to stop a utility merger in New Mexico. ILSR Co-Directors John Farrell and Stacy Mitchell moderated the event.

Read ILSR’s report on How Big Utilities are Impeding Clean Energy, and What We Can Do About It.

Maine State Representative Seth Berry and State Senator Rick Bennet are key supporters of Our Power Maine, with Berry serving as an advisor and Bennet as citizen leader.

Customers of Maine’s two investor-owned electric utilities, Central Maine Power and Versant Power, are unhappy. Electricity service from these companies is unreliable and expensive. Bennet explains that the utilities hold little accountability to the communities they serve, since their ownership is overseas.

We’ve come to this point where this isn’t just about electric power, it’s about the power of people for self-determination, to control the grid themselves, and make it a grid for the future. That’s really what this movement has become. More than just about electrical power, but really about political power.

Berry suggests that a consumer-owned utility would be more accountable to the people. He also points out how municipal utilities have been more successful in making the switch to a 100 percent renewable energy mix.

Berry sponsored LD 1708, a bill to establish a consumer-owned utility, in Maine’s 2021 legislative session. The bill to create Pine Tree Power passed the Maine House and Senate, but was vetoed by the governor. Organizers are collecting signatures and plans to bring Pine Tree Power to voters as a ballot initiative in November 2022.

For more about Our Power, go to ourpowermaine.org or listen to our October 2021 interview with Representative Seth Berry.

Jean Su is an attorney and Director of the Energy Justice Program at the Center for Biological Diversity. The Center filed a lawsuit against Arizona utility Salt River Project when it increased its rates by 65 percent for rooftop solar customers. The lawsuit made its way to the Ninth Circuit Court of Appeals, which found that Salt River Project’s attacks on rooftop solar may be liable under federal antitrust law.

The whole point of antitrust, the thrust of creating these laws, was to actually protect our democracy. It was to ensure that corporations did not have a greater voice over our democracy than everyday citizens. That is the background, and that’s why we need to break up large monopolies because we don’t want our regulators and our politicians to be controlled.

Get up to date on the Salt River Project case in episode 152 of Local Energy Rules.

Mariel Nanasi is the Executive Director and President of New Energy Economy, an organization advocating for community-based energy solutions in New Mexico.

When international conglomerates Avangrid and Iberdrola tried to merge with the Public Service Company of New Mexico (PNM), Nanasi and New Energy Economy went to court to fight the merger. They gathered support from New Mexicans and demonstrated why the merger was not in the public interest. Eventually, the Commission found that the risks in merging the companies outweighed the benefits to ratepayers.

Are we going to replicate the exact same system of inequity and inequality and of racism, and then literally export the profits to Wall Street at 1%? Or are we going to shift that model? Are we going to have our power and stop the violence?

This is the 154th episode of Local Energy Rules, an ILSR podcast with Energy Democracy Director John Farrell, which shares powerful stories of successful local renewable energy and exposes the policy and practical barriers to its expansion. 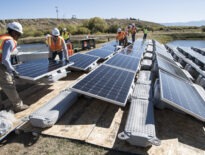 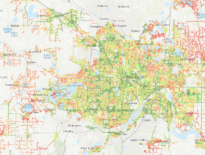