Technologicalimprovements gradually pushed small power plants off center stage, and eventually, off the stage completely. In 1901 the Hartford Electric Authority installed a 2,000 kW plant. By the mid 1920s, the largest plant was producing 175,000 kW. By the 1970s a new power plant produced 1,000,000 kW. Two or even three such plants in a single location could serve 2-3 million households, equivalent to all those in Minnesota, North Dakota and South Dakota.

The result. Customer-produced power virtually disappeared, falling from 60 percent of all electricity generated in 1900 to 20 percent in 1930 to under 4 percent in 1980.

Andthen, when it seemed that decentralized power had been relegated to a historical footnote, the trajectory abruptly changed. Rising interest rates in the 1970s made it increasingly expensive to build large power plants, while rising electricity prices and a weakening economy made it increasingly difficult to predict demand. In the early 1980s, when electricity demand actually fell for the first time since the early 1930s, nuclear-based utilities from New England to Washington state declared bankruptcy. Over-capacity plagued utility companies for the next 15 years. Construction of large central power plants slowed to a trickle.

In1978. Congress changed the electricity rules. It abolished the century old monopoly utilities had over electricity generation. In the future. utilities would have to purchase electricity from independent power producers as long as these producers relied on renewable fuels like wind or sunlight or on high efficiency cogeneration power plants that captured the waste heat for useful purposes.

Theindependent power industry grew so rapidly that by 1990 most new electrical capacity was owned by non-utility enterprises. Rather than betting the company on one $2 billion nuclear power plant that took ten years to come on-line, these unregulated entrepreneurs invested $50 to$100 million in small power plants that came on-line in less than a year.

The size of the typical independently owned power plant built in 1990 was closer to one built in 1925 than to one built in 1975. And that technological downsizing is accelerating.”Technology is moving toward the end user”, is how Renz Jennings, former Commissioner of Arizona’s regulatory agency described the dynamic. Allied Signal’s new 75 kW power plant has about the capacity of Edison’s Pearl Street plant. The washing machine-sized turbogenerator can supply the electrical needs of a small store or restaurant. They’re selling like hotcakes. In December 1998, Capstone Turbine Corporation shipped its first two 30 kW microturbines. In November, 2000 it shipped its 1000th. .

Hospitals in Ontario and California, airports in New York and Michigan, breweries and retail stores and restaurants and convention centers in Illinois have already installed their own power plants. Paul Colgan, director of public affairs of the Building Owners and Managers Association in Chicago declares, “It’s something we feel that every commercial property owner should look at.”. Decentralized power is going mainstream.

Todaythe delivery of electricity can cost more than its generation. It can be cheaper to build a small power plant at the end of a distribution line than upgrade the line. That’s what the New York City policy department recently discovered. To upgrade distribution lines to their 150 year old Central Park police station would cos. $1.2 million and impose a heavy toll on the landscape. The department opted for a 200 kW fuel cell, about the size of a large garden shed, which now supplies all its power and also recharges non polluting electric vehicles used by the police to patrol the park.

The nation’s 900 rural cooperatives own about half of the country’s distribution lines. Nearly half of these lines were installed over 40 years ago and soon will require upgrading. Low customer densities means the cost of upgrading will be borne by relatively few ratepayers. These are excellent locations for dispersed power plants.

Increasingnumbers of businesses are turning to self-generated power not because of price but because of reliability. Craig Schuttenberg, vice president of Chicago consulting firm Energy Choices, insists, “If power reliability at a business is a question you’re much safer with your own power.”. First National Bank of Omaha, for example, installed a fuel cell system to power its 200,000 square foot computer data center. The price of self-reliance was much higher than the price o. dependence, but the company found that acceptable, given that it could lose an estimated $5-7 million an hour if its computers went down.

Weare bombarded by stories about California’s tragic power situation. But the most important story of all goes unheralded. California’s embrace of a new power paradigm. In his state of the state address, Governor Davis announced that he would require all state universities and community colleges “to move toward energy independence”. In September he signed a bill “to increase self-sufficiency of consumers of electricity through the deployment of self-generation and cogeneration”.

Californiais not the only state to seriously embrace decentralized power. Texas is developing a system for certifying decentralized power plants the way boilers and furnaces are now certified. Simplified interconnection standards and tariffs that favor rather than discriminate against self-generation are being implemented in California and New York and Texas.

About 30 states have enacted net metering laws, which allow homeowners and businesses with small, clean power plants to spin their electric meters backward and sell any electricity they generate above and beyond their internal needs back to the utility.

Willthe future consist of tens of millions of self-sufficient, isolated electricity customers. That is unlikely, because to be totally self-sufficient one would need to install a backup power plant or very expensive storage systems. Better to be self-reliant, but not self-sufficient. Indeed, in the early 1980s, a study done by MIT concluded that the optimum configuration of a solar cell-powered house was one in which the house exported to the grid half of the power its roof produced and imported from the grid half of the power the household consumed. That kind of symbiotic relationship might characterize a decentralized electricity future.

Yetdespite the clear and compelling evidence that the technological context has changed. national, and for the most part, state policy makers continue to act as if nothing has changed. They are pursuing policies better suited to 1970 than to 2000: accelerating the construction of high voltage transmission lines and large fossil fueled central power plants.

Decision making power is moving further and further away from citizens and customers. In the last eight years FERC has approved mergers affecting more than half the total assets of investor owned utilities. Some predict with approval that by 2010 fewer than 10 giant electricity companies, many with a primary economic interest half a globe away, will provide our electricity.

InIllinois of the six largest electric utilities, four have been purchased by out of state companies and the fifth, Commonwealth Edison, is merging with Philadelphia Electric Company (PECO). “It is obvious that there has been a rush to consolidation and …(t)hat is certainly one of the definite results of the Illinois restructuring law,” acknowledges Richard Mathias, chairman of the Illinois Commerce Commission, the state’s utility regulatory agency.

Thehighest priority by federal and state policy makers today is on streamlining the permitting process to allow for the building of more central power plants, and accelerating the construction of new high voltage transmission lines to carry the new electricity generated toward ever-more-distant customers.

We need a change of focus. We may indeed need new transmission lines, and new coal fired power plants. But first we should focus on getting more out of what we have. See how much electricity we can generate on our farms and within our industries and businesses and households. Only when we have exhausted the possibility of local self-reliance should we pursue dependence.

We can and should debate the comparative economics of dependence and self-reliance. But policy makers should also take into account the popularity of energy independence that goes far beyond the saving of a few dollars a month. Back in 1982, I wrote a book Be Your Own Power Company that predicted the new decentralizing dynamic in electric generation. It concluded with an observation I still believe is valid. “The economic attractiveness of decentralization is becoming ever more apparent. Yet to emphasize only the economic value of decentralization would be a mistake. The political and psychological value of a widely distributed capacity to produce a commodity as essential as electricity is equally important. Self-reliance was a major objective of the nation’s founders. Benjamin Franklin once remarked, ‘The man who trades independence for security usually deserves to end up with neither.'”

Over the last 100 years we relinquished our control over electricity production in return for a promise of lower prices and increased security. Today, at least for the citizens of California and Oregon and Washington and Idaho, that trade has resulted in both higher prices and less security.

David Morris is vice president of the Minneapolis-based Institute for Local Self-Reliance and author of ”Seeing the Light: Regaining Control of Our Electricity System”

An earlier version of this article appeared in the Star Tribune, February 18, 2001 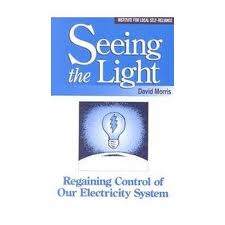 Energy Report: Seeing the Light – Regaining Control…
Energy Bonding With the Next Generation
Sign Up For Energy Democracy News