This week in democratic energy, media reports discussed everything from net metering to the installation of a solar photovoltaic system in a New York county jail.

Elisa Woods of GreenBiz reports that New Hampshire may be the next state to adopt electric grid modernization, including microgrids, to increase grid resiliency and economic efficiency:

“The advisory agency recently recommended that the Public Utilities Commission investigate grid modernization, in keeping with similar action in Massachusetts and New York. The states are looking at how to make the grid more storm-resilient, economic and efficient with microgrids, distributed energy, smart meters and other approaches that foster local energy.”

Meanwhile, California is struggling with an outdated and ineffective grid planning process. According to an Oct. 9 article in Rocket News, while California’s large-scale renewable energy is taking off, the small-scale utility market is facing an uphill battle. The current tariff program, ReMAT, has several problems, ranging from its small size to its policy of adjusting prices based on market interest. A 2013 residential rate reform bill may be moving the program in the right direction:

“There is hope, however. AB 327, passed in 2013, requires that the California Public Utilities Commission (CPUC) design a program for utilities to create distribution resources plans (DRPs) that incorporate distributed energy resource planning into the normal distribution grid planning process. In other words, the utilities now need to consider two-way flows of energy in their planning process, rather than the top-down flow that is the traditional model. AB 327’s DRP program requires that the utilities proactively design their grids to optimize distributed energy resources like renewable energy, demand response and electric vehicles. This is a paradigm shift in how utilities do grid planning.”

Net metering received considerable coverage over the past week, with the introduction of a New Jersey bill that would raise the net metering percentage to 7.5, making it one of the nation’s highest. As Mary Powers of Platts reports:

“The chairman of the New Jersey Senate Environment Committee has introduced a bipartisan bill that would raise the state’s net metering capacity limit to 7.5% of peak demand, which would make it one of the highest limits in the country…’Net metering allows electricity customers who generate their own electricity using solar, wind, biopower and other forms of renewable energy to bank excess electricity on the grid in the form of kilowatt-hour credits. These credits can be used by customers as needed,’ a statement accompanying the New Jersey bill said.”

In Colorado, however, net metering is under attack, with Xcel Energy claiming that solar net metering customers receive a hidden subsidy. Lucy Woods of PV Tech reports that the Colorado Public Utilities’ Commision will be examining net metering rates in response to the renewable energy plan Xcel filed with the PUC in July.

Also in Colorado, Lennar — one of the nation’s largest home builders, and SunStreet, a Lennar subsidiary, teamed up with Representative Ed Perlmutter (D-CO) for a ribbon-cutting ceremony celebrating the expansion of the program into Colorado. According to a SunStreet Energy Group press release published in MarketWatch, Lennar’s Solar 20/20 Plan™ aims to make renewable energy more mainstream by focusing on new construction projects, which have the ability to integrate solar more affordably and in a less noticeable manner:

“‘With 300 days of sunshine every year, Colorado is naturally suited for the widespread adoption of solar energy,’ Perlmutter said. ‘Lennar’s innovative and unique offering serves as a model for Colorado and the rest of the country by demonstrating that sustainable, quality homes can be built in a way that is beneficial to the planet – and the homeowner’s wallet.’”

An opinion piece published in the Green Bay Press-Gazette on Oct. 12 echoes these sentiments, calling for utility companies to give solar energy a chance in Wisconsin. Mark Tauscher, a former offensive tackle for the Green Bay Packers, wrote:

“…A recent bipartisan poll showed 93 percent of Wisconsinites believe they should have the right to put solar on their homes and pay for it however they choose. But rather than embracing solar and letting it compete for consumer choice, our utilities are proposing billing changes that will favor business as usual, sending our dollars ($12 billion annually) out of state to import energy resources.”

“[My wife] and I want to look out for our family’s future — having the freedom to choose solar makes sense for us, and we feel it makes sense for Wisconsin. Just think what we could do if next year, only a portion of the $12 billion sent out of state for energy could be kept here in Wisconsin. Today, just 0.02 percent of Wisconsin’s electricity comes from solar — let’s grow that number to 1 percent. Amazingly, this simple, fair, and conservative change would create thousands of jobs in Wisconsin’s solar industry.”

New York Governor Andrew Cuomo has also embraced the power of solar. As part of New York’s initiative to increase solar capacity, Governor Cuomo approved a plan to install a solar photovoltaic (PV) system on the grounds of the Oneida County Correctional Facility. According to the Rome Observer, the project stands to provide considerable savings for the county:

“‘Not only will we be the first county jail in New York to produce solar energy on site, but this solar array project will generate nearly $40,000 in savings during the first year and nearly $2 million dollars in cumulative savings over 25 years,’ said Oneida County Sheriff Maciol.“With the project and its’ funding source now approved, the Sheriff will formally forward the contract proposal to the County Executive and then it will make its way to the Board of Legislators for final approval later this year.”

Unfortunately, while PV projects such as the aforementioned have been steadily increasing over the years, Frank Jossi of Midwest Energy News reports that — in Minnesota at least — solar thermal systems are often overlooked:

According to Randy Hagen, CEO and founder of Solar Skies, a manufacturer of solar thermal collectors,  solar firms “are going to be installing where there is a good return and the solar photovoltaic program is where you would want to spend your time.”

However, good news for solar thermal came in the form of a revolutionary new method developed by a team of researchers at the University of Cambridge. The technique utilizes organic semiconductors, rather than traditional inorganic semiconductors (such as silicone) — radically boosting efficiency. In fact, the university believes it could “smash the solar efficiency ceiling.” As described by Stefano Pozzebon of Business Insider (Singapore):

“In a solar cell, the light is used to excite the electrons in the atoms of the semiconductor: This excitement releases energy that can be used to produce electricity. In silicon solar cells, every single particle of light (photon) can excite one electron only, but in pentacene, a material naturally present in green leaves, the same quantity of light releases not one but two electrons, doubling the energy capacity of the semiconductor.”

“This improves the energy-efficiency ratio to up to 95%, a figure impossible to reach with conventional, inorganic semiconductors.” 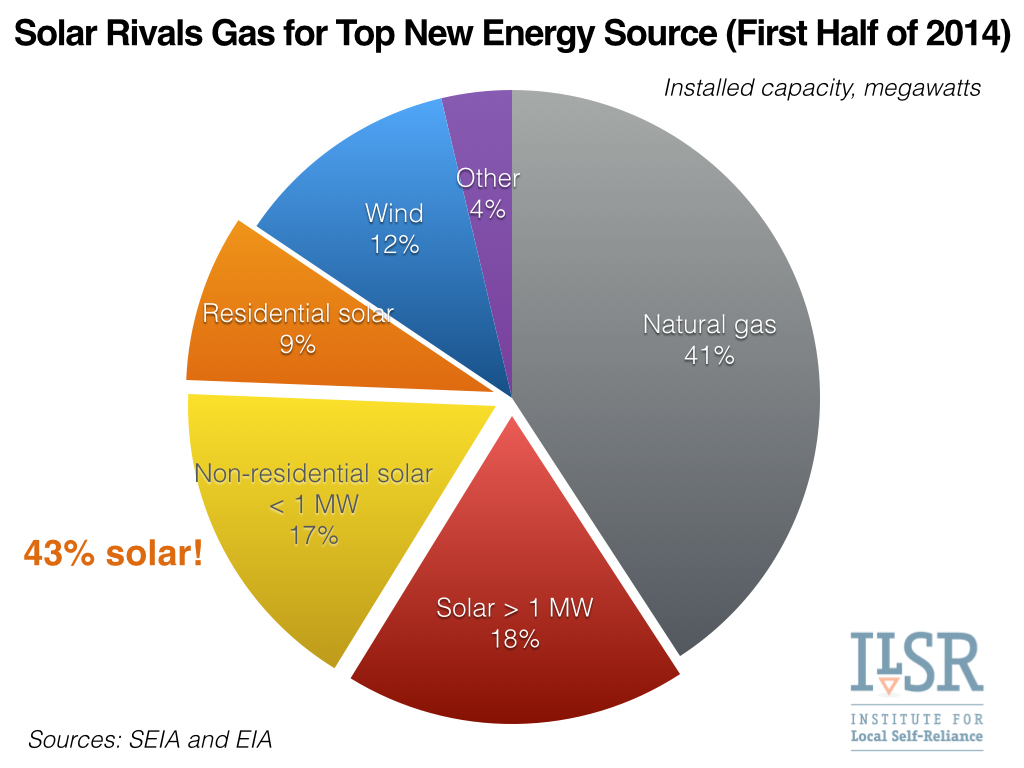 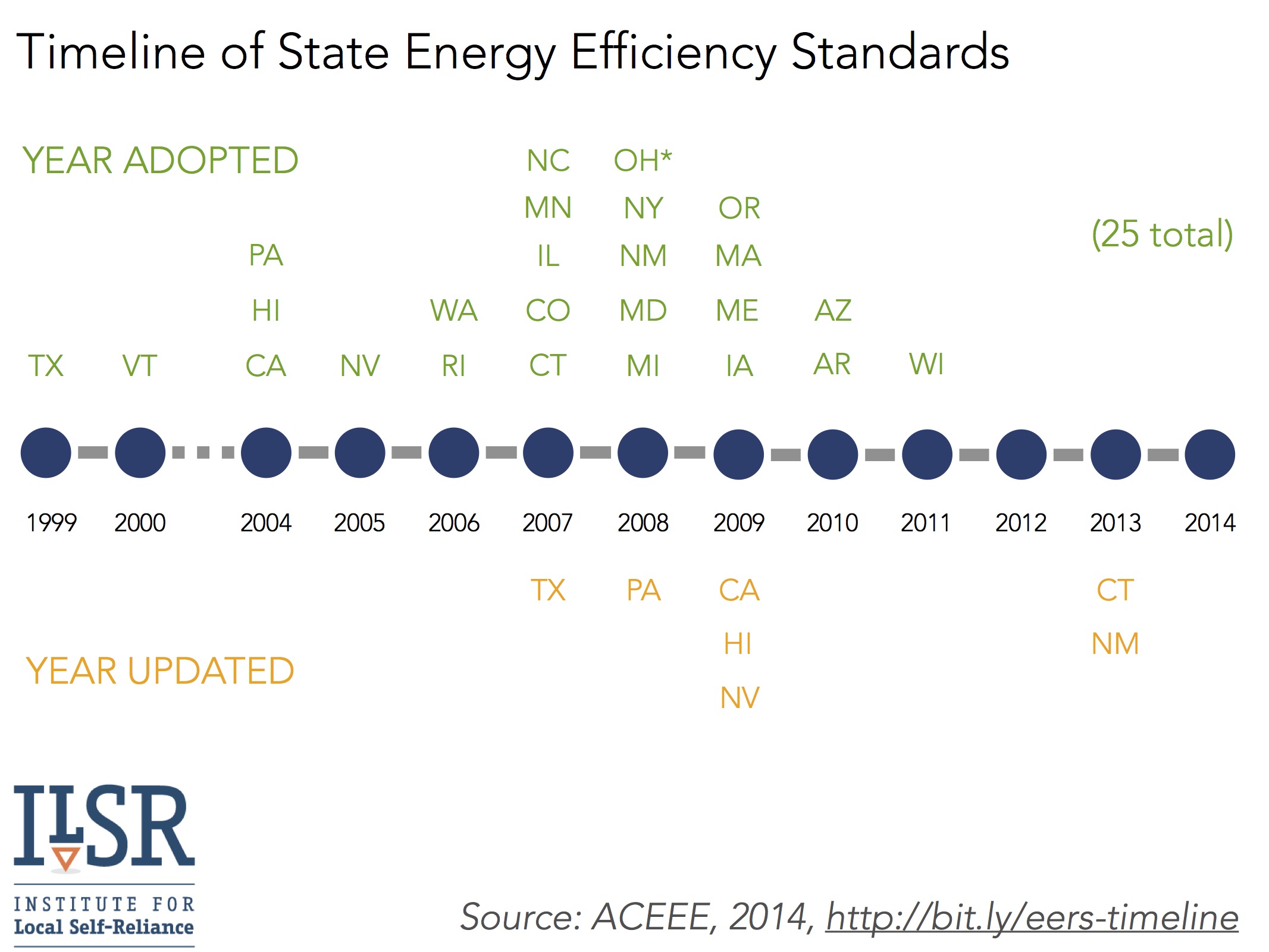