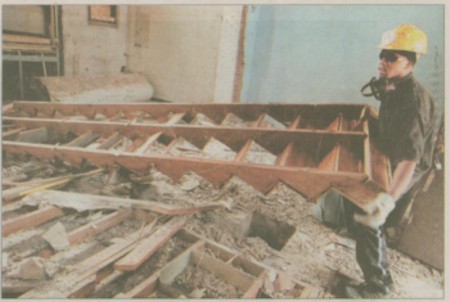 Two months ago, Beverly White tore down her home of 39 years, floorboard by floorboard and nail by nail.

She and dozens of other former residents of the Stanton Dwellings public housing project in Southeast Washington are taking apart the 348-unit community, neatly stacking thermal windows, tongue-in-groove oak flooring and even the kitchen sinks in one of the gutted apartment buildings.

Instead of bringing in the bulldozers and burying the debris in landfills, they are painstakingly taking apart the units. They hope the materials they salvage will fetch upwards of $700,000 from builders and individuals who can buy them for about half to a quarter of the price of what they would go for new. 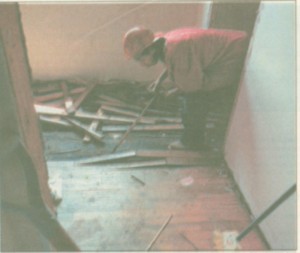 In the process, about 40 formerly unemployed people have learned a new skill and now make $11 an hour, plus health benefits. Most used to live in Stanton Dwellings, and a few are from elsewhere in Southeast.

White, who spent her life in the deteriorating community of 87 two-story brick buildings, bounced from job to job, as a teacher’s aide, a sales clerk and other minimum-wage indoor positions. This is her first manual-labor job, and she said she enjoys the physical work.

“It feels good. My father is a carpenter, and it’s just in my blood to do this,” said White, who now lives in Barry Farms in Southeast.

“I worked on the apartment where I used to live, and I was finding pennies in the floorboards, all sorts of stuff,” she said. “But it wasn’t like I was feeling sad, because I know I’m making way for something better.”

That something is a 600-unit mixed-income development called Henson Ridge, construction of which is scheduled to begin later this month on the site of Stanton Dwellings and the adjoining Frederick Douglass public-housing project. White plans to buy a below-market-price new townhouse in Henson Ridge, using closing-cost and down-payment help available through the federal and D.C. governments.

Meanwhile, she uses a new invention called a denailing gun, which sucks nails from the floors and walls to speed the process of taking down her former community

“Bringing the walls down, now that’s the best part,” she said.

Rather than demolition, the work is called deconstruction.

“It’s done in exactly the reverse order that a builder builds it. The first things taken out are the last that were put in, handrails, light fixtures, vanities,” said Jim Primdahl, deconstruction program manager for the Institute for Local Self-Reliance, which oversaw the training of workers for the project. The institute has also coordinated deconstruction of public housing in Bridgeport, Conn. 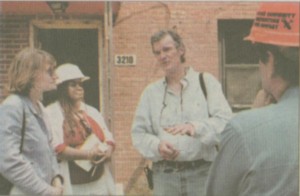 “I drive by a boarded-up building and say, ‘Look at the product in there.’ Most people just see the blight,” he said.

When Primdahl looks at a brick, floorboard or other piece of building material, he envisions what he calls “embodied energy.”

“Imagine all the energy that goes into making a brick. Energy is used transporting the brick and putting it into a house, where it stays for 25 or 50 or 100 years,” he said. “Does all that then go to the grave? Or does it go into the cradle, where it can be used again?”

Primdahl estimates that if bulldozers plowed through Stanton Dwellings, it would take 10 workers about six weeks to bring down the 40-year-old project. Instead, deconstruction, which is slated to be completed in August, will take eight months and employ about four dozen workers. The sale of the materials gleaned from the project and greatly reduced disposal fees make the cost of deconstruction competitive with traditional demolition, he said.

The institute said that more than 200,000 deconstruction jobs could be created nationally if the practice were put into widespread use.

Locally, the D.C. Housing Authority hopes to expand the use of deconstruction to other public building projects — and eventually help create a worker-owned company that would take on private projects as well.

“We’re fairly excited about this,” said Larry Dwyer, the Housing Authority’s director of planning and development. “Deconstruction has the potential to grow people’s incomes so they can become employed homeowners.”

For Frederick Tibbs, 51, work on the deconstruction crew has given him not only a job after years of chronic unemployment, but also a new purpose in life.

“I knew at my age, I’m not going to have many opportunities like this to train to get into a brand-new field. I think deconstruction is going to be a big thing. This is something that’s catching on,” said Tibbs, who had lived with his sister at Stanton Dwellings and now lives in Upper Marlboro with his niece.

John Kitt, who calls himself a “human bulldozer,” said he gets satisfaction from dissecting buildings. He recently knocked down a staircase in one of the units and was prying the steps off one by one to be sold for $8 apiece. The out-of-work contractor said he likes what he is doing so much, he hopes to start his own deconstruction business. 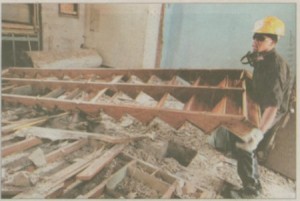 And workers say they appreciate the environmental benefit of salvaging everything from kitchen cabinets to bathtubs for reuse.

“It’s one thing to hear someone say you’ve got to protect the Earth, but it’s another to actually be involved in doing it,” said Jamal Harris, 30, a father of three. “It really means something now to be saying you’re doing this for the next generation.”

Harris serves as the project’s safety facilitator and lived up the street from the housing project.

The redevelopment project is partially funded by a $29 million grant from the Department of Housing and Urban Development’s HOPE VI grant program. Hope VI grants are allocated to replace distressed public housing projects by demolishing the buildings and replacing them with townhouses or garden-style apartments that house residents with a range of incomes.

The projects also forge partnerships with a variety of constituents; at Stanton Dwellings, the D.C. Housing Authority is working with governmental and nonprofit agencies, including Just U Wait ‘N See, a community development corporation, which offers job support and a home buyers’ club to help residents clean up their credit and understand the mechanics of getting a mortgage.

Yet as the government moves to transform the forlorn, crime-ridden image of public housing by integrating moderate-income residents and more upscale housing into the picture, some housing advocates say the poor are being left out in the cold.

“HOPE VI grants are certainly not a bad idea, but they create problems when dislocation occurs,” said Kim Schaffer, communications director for the National Low Income Housing Coalition. “People are saying, ‘This was my home for many, many years. Even if it has deteriorated, it’s better than not having a home.’ ”

Nationally, more than 115,000 public-housing units have been demolished since the HOPE VI grant program started in 1993. Only 66,000 new units have been built to replace them, Schaffer said.

Brenda Graham-Nwabude, co-director of Just U Wait ‘N See, said that services provided by her organization, including a newly hired relocation director, can ease the transition.

Although Henson Ridge will replace the number of units lost in the two public housing projects, some will come with a higher price tag than the former residents can afford, a concern of public housing advocates.

“The truth is that if everyone wanted to return as low-income residents, they couldn’t do that,” said Dwyer, who serves as the Housing Authority’s HOPE VI coordinator. “But the intention is to have a healthier mixed-income environment, where there is a spread of incomes and the socioeconomic mix is much healthier and will help improve the lives of all residents.”

Many of the deconstruction workers take Dwyer’s point of view.

“We’re not only tearing this down, but we’re building it back up with people as the first priority,” Harris said.