Americans spend a great deal of money heating their homes. The average U.S. household spends up to $1,600 every winter, and 43% of American homeowners’ electricity use goes towards space heating. There is significant evidence that improving heat efficiency can decrease energy consumption, so increased energy efficiency can lead to major savings. Merely insulating attics and floors and air sealing a home can save bill payers 11% of total energy costs — hundreds of dollars a year.

Although insulation comes with an up-front cost, there are a number of options to make the process affordable and accessible. For example, in Pay As You Save programs, utilities provide the up-front financing for an upgrade or repair. In this case, the electricity provider pays a contractor to identify areas of heat loss and insulate the area. The utility then takes a cut out of the resulting savings on the customer’s energy bill. The result: savings for the customer and a return for the utility, as well as decreased electricity demand, stress on the grid, and carbon emissions.

So if heat loss is such a danger to the environment, and the fixes are so functional, how do we get Americans to choose to fight heat loss? One way is through democratizing access to information about heat loss and increasing access to efficiency programs. A number of communities have undertaken initiatives to use UAV (unmanned aerial vehicles, usually known as “drones”) thermal imaging to map their buildings.

Drones have exploded in popularity in recent years. The global industry was worth a paltry $32 million back in 2010. The figure has ballooned to $20.8 billion in 2021 and is estimated to reach $63.6 billion by 2025. We see drones every day — taking videos at events, monitoring crops, being kited around at the park — and just as often, we hear about their possible future uses. Yet, there are other massive, current developments in drone technology that you are less likely to see in the news. In particular, drone thermal imaging and its potential to revolutionize energy efficiency.

Learn more about how you can make your home energy efficient by checking out the Citizens Utility Board.

Drones equipped with infrared cameras can take pictures of buildings and convert them into thermograms, or images showing the heat levels of different components of a photograph. Drones must be flown during the right conditions —- ideally partly cloudy morning hours during the winter months — in order to mitigate any solar radiation or warmth already in the air. The two dimensional thermograms are then converted into orthomosaics (a mosaic of various aerial photos) and turned into a three dimensional model. The models indicate where in a building heat is lost. Building owners can then rectify the heat loss problem and improve their efficiency. 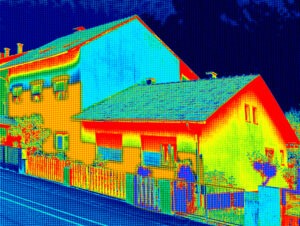 Sometimes, big ideas come from small places. Warren, Minn., population 1,600, is a farming town about one hundred miles due north of Fargo. Warren is the county seat of Marshall County, perhaps most famous for a claimed UFO incident in 1979. Despite its small size and isolated location, however, Warren is leading the charge on this exciting new technology. Zackary Nicklin is an instructor in remotely piloted aerial systems at nearby Northland Community and Technical College. In 2016, Nicklin, with the help of a number of student volunteers, began one of the first drone thermal-imaging programs in the United States. On behalf of the city, Nicklin and his team are pursuing the ambitious goal of developing thermal images of all 700 buildings in Warren. The hours are brutal: Nicklin prefers to operate between 9 p.m. and 2 a.m. and the weather is no better, since 20-40 degrees Fahrenheit is optimal. As of 2019, Nicklin had taken over 12,000 images, many of which have revealed problem spots. The courthouse windows, for example, needed to be replaced, and a number of city buildings still need insulation.

Arnsberg, Germany, dubs itself “Stadt der Thermografie” or “City of Thermography” and is a world leader in thermography and energy efficiency. The city has hosted annual “energy-saving walks” (“Energiesparzier”) since 2014. During these events, city officials and energy consultants walk with residents and homeowners in a different neighborhood each year. Energy Consultant Carsten Peters takes thermal images of residents’ houses on a handheld thermal camera and shows Arnsbergers where their houses are losing heat. Using these images, residents learn how to better conserve energy.

Furthermore, Arnsberg is a leader in aerial thermography. In 2013, the city carried out its “Climate Protection Gives Wings” project, in which the city carried out an aerial thermal survey of the entire city and made the information available to property owners. About 40 percent of city property owners accessed the information and learned where their buildings were losing thermal energy. The 2013 project was conducted by airplanes. However, in 2016, a delegation from Arnsberg visited Warren through the Climate-Smart Municipalities Program. The two cities traded information: Arnsberg learned about Nicklin’s drones, and Warren about Arnsberg’s 2013 project.

With their new information, the two cities launched drone-based thermal imaging projects — Nicklin’s long-term project discussed above, and Arnsberg’s 2017 “MultiCopter Aerial Survey” project. The Survey was centered in the Holzen district of Arnsberg and mapped over 92 buildings using MultiCopter drones, after a delay necessitated by overly sunny weather conditions. Arnsberg estimates that a survey of a single neighborhood costs between 10,000 to 20,000 euros, (roughly $11,500-$23,000) depending on the specific neighborhood. The information will be used to provide more information to homeowners who wish to undertake energy-saving measures.

Arnsberg and Warren serve as models for community-oriented innovation and the importance of local action.

The University of Massachusetts, Lowell, is a public research university located just northwest of Boston. With a student population of 18,000 and over 2,000 faculty and staff members, the university is in many ways no different from a small town.

In order to minimize its carbon output, the university chose to employ an infrared camera enabled drone. A collaboration between the University’s Facilities Management and the Rist Institute for Sustainability and Energy (RISE), a UML organization dedicated to “bring(ing) together the university’s efforts across climate change mitigation, resilience, and energy innovation,” the project covered UML’s North and South campuses, which host the university’s central steam plants. The project was led by faculty from the Francis College of Engineering, as well as Facilities Management, with student support. Professor Alessandro Sabato, from the Structural Dynamics and Acoustics Laboratory, noted that involving students was pivotal and that the project showed them that “the tools they use can be beneficial to the whole community and are not just another equation on their dissertation.”

The study revealed a potential underground steam pipe leak, as well as “noticeable heat loss” from a wall in the Olney Science Center. The results and images of the project will be published on the university’s CampusViewer interactive map.

Drone thermal imaging is very promising and is booming in the private sector, so it is surprising that more municipalities have not followed Warren and Arnsberg’s lead. Local governments have a responsibility to promote the wellbeing of their citizens, since providing residents with cost-effective thermal images benefits them in many ways.

First, it can dramatically cut their electricity bill. In the United States, where half of Americans couldn’t afford a $400 car repair, a little bit can go a long way towards economic stability. Through home efficiency upgrades, the average American could save $200-$400 per year.

Secondly, climate change poses a major pressing threat to Americans across the country. Helping residents reduce emissions is a definitive step towards combating global climate change, and an excellent example of how communities can do their part. Crucially, while private companies ultimately seek profit, local governments are more attuned to the needs and wellbeing of their constituents than most other entities.

Municipalities themselves also have a great deal to gain by utilizing drone thermal imaging. It’s certainly worth noting that the up-front cost can be pricey. This is a concern which could scare off many local governments from the beginning (1). The Arnsberg flights were estimated at around $11,500-23,000 per flight, and UML’s camera alone was worth $13,000. However, the benefits are likely even larger. Certain private sector companies have noted that “many… clients report that the savings they enjoy from the detections of thermal inefficiency discovered by our drones” pay for the cost of the service from the very first flight. Local governments, who have no incentive for profit, would likely charge even less, increasing the savings to residents compared to private contractors.

Much like residents, municipal governments can save a meaningful amount of money by preventing heat loss. According to the EPA, as much as ten percent of a local government’s budget is spent on energy. This money could be redirected into schools, infrastructure, or other green initiatives. Residents who save money will be more prosperous and spend those savings in their community, and supporting local businesses has real and tangible benefits to a community. Furthermore, offering a free service fosters goodwill between municipalities and their residents. Residents see their local government working for them, which could increase public engagement and make neighborhoods stronger.

The various project case studies also show examples of communities building relationships, whether that’s municipalities like Warren and Arnsberg, academic-municipal partnerships like Warren and Zachary Nicklin, or different academic communities like at University of Massachusetts Lowell. Exchanging information can accelerate further progress for both partners. Additionally, besides the increased engagement of the residents whose homes are being scanned, public thermal imaging projects connect those doing the scanning to their communities. As UML Professor Sabato noted, this is an excellent opportunity.

Municipality or community-based UAV thermal imaging programs have the potential to grow local economies, combat climate change, save residents money, and promote community and engagement. Local governments across the United States and world should strongly consider starting their own programs (2).

1. For more information about the best way to make UAV thermal imaging affordable, see “A Cost-Effective System for Aerial 3D Thermography of Buildings” by Daffara, Muradore, et. al (https://www.proquest.com/docview/2431094110?pq-origsite=primo&accountid=351) and “Analyzing Capacity of a Consumer-Grade Infrared Camera in South Africa for Cost-Effective Aerial Inspection of Building Envelopes” by Vorajee and Mishra (https://www.sciencedirect.com/science/article/pii/S2095263520300418)

2. For more information on implementation of municipal implementation of thermal imagery, see “Exploring the Use of Thermal Imagery for the Promotion of Residential Energy Efficiency” by Chu, Westerhoff, et. al for the City of Vancouver (https://calp2016.sites.olt.ubc.ca/files/2016/05/Thermal-Imaging-Report_FINAL-Mar-2017.pdf)

Cities Use Drone-Flown Cameras To Find Heat Loss, Conserve Energy, and Save Money 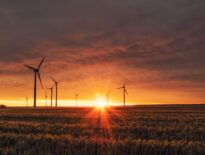 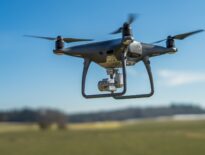