Joy Hughes was living in the San Luis Valley of Colorado, a place with a “tremendous amount of solar potential,” so good that the valley’s residents were being overwhelmed by proposals for large scale solar power plants. One had a “field of things like radar dishes” and another included a “600 foot tower.” The influx of outside companies seeking solar profit led Joy to ask, “Why not just set up solar arrays that can provide power for people in the local community and offset their electric bills?”

The Solar Gardens Institute was born, with a vision of helping community members pool their resources, produce their own energy, and keep their energy dollars local.

A Contest of Who Could Type As Fast As Possible

One of the Institute’s first initiatives was Colorado’s nascent solar gardens legislation, a national prototype for community shared renewable energy. The bill passed in 2010, and after two years in rulemaking the 9 megawatt (MW) program sold out in 30 minutes. While it was a good framework for encouraging community solar, “it became a contest of who could type as fast as possible,” said Hughes, who felt that the application process (and other aspects) weighted against some of the more authentically community-based projects.

The Colorado law had many good things, including requirements for participation by low-income participants, geographic proximity of subscribers to the solar project, and slightly higher incentives for smaller community solar projects. The last is what make these small projects possible, Joy said, and gets them closer to where people are using the electricity. The proximity also makes technical sense for small communities, because “a substation can take in about as much as it can put out.”

Joy also identified several potential improvements to the Colorado law. For one, she’d like to see community solar projects have a choice over their renewable energy credits (RECs). Some nonprofit projects would rather retire them instead of being required to give them to the utility. She’d also like to see improved selection criteria for projects (with a preference for those that are close to load, have local ownership, use local labor, or are financed with crowdfunding).

Joy is excited about the new community solar guidelines coming from the Interstate Renewable Energy Council (IREC), an open process that will help decide on a “gold standard” for community solar. There are also community solar laws being proposed in several other states, including California, Washington, Massachusetts, Nebraska, Maryland, DC, Hawaii (Minnesota’s almost-passed solar energy standard also features a provision for community solar).

Removing Barriers and Moving Ahead

Joy also discussed how to remove some of the barriers to community renewable energy at the federal level. One, remove the tax equity bottleneck by passing the SUN Act to allow individuals to get tax credit with a community solar project. Offer exemptions in securities laws to let people get credits on their bill or other methods of repayment, helping avoid financial disclosures that run to 90 pages and that “nobody can really do without a lot of attorneys.” She also wants to see more open source legal documents and other strategies that create “a level playing field for small players.”

This is the 9th edition of Local Energy Rules, a new ILSR podcast that is published twice monthly, on 1st and 3rd Thursday. In this podcast series, ILSR Senior Researcher John Farrell talks with people putting together great community renewable energy projects and examining how energy policies help or hurt the development of clean, local power. 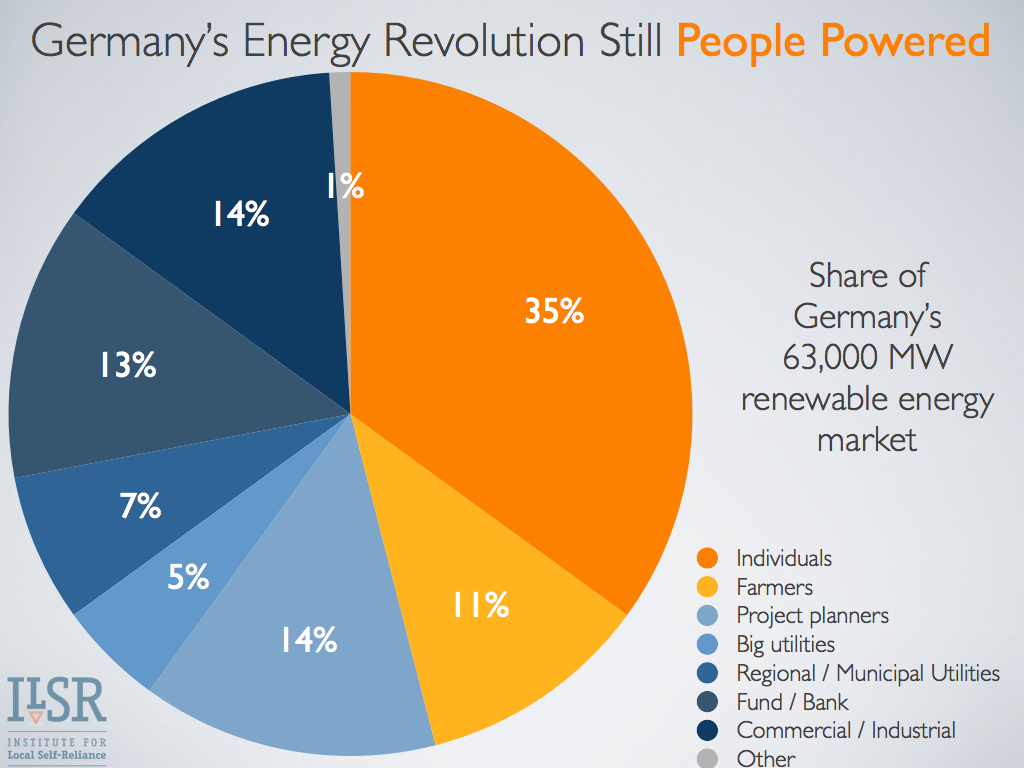 Energy Half of Germany’s 63,000 Megawatts of Renewable …
Sign Up For Energy Democracy News