This commentary was written by ILSR’s Neil Seldman and originally posted in Waste360.com on September 10, 2021

History of Modern U.S. Recycling and the Potential for Zero Waste

The graphic presented in this article represents the history of U.S. recycling from the late 1960s to early 2000s when dual-stream recycling, under the control of local governments and informed by organized citizens and small businesses, took the nation from virtually 0% post-consumer recycling to the 35% recycling level. Subsequently, cities switched to single-stream recycling. 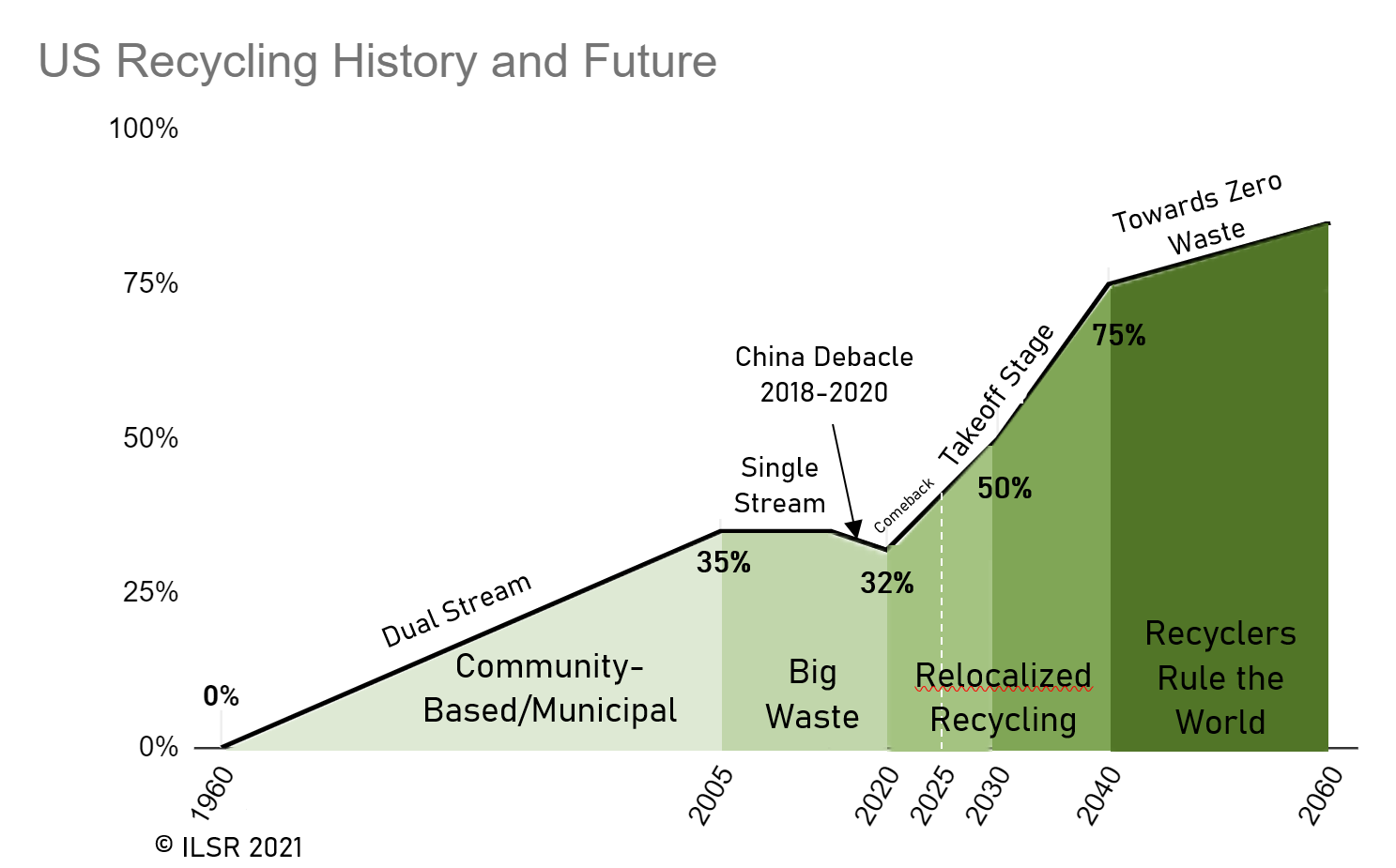 In town, recycling facilities and their jobs were shut down and cities had to send low-value mixed materials to distant inefficient processing facilities at great public cost. These facilities could not recover glass, 20-25% of the recycle stream for industrial use. Materials managed got low prices in the marketplace because of contamination. Eventually the markets disappeared after U.S. companies refused to heed China’s warning (Green Fence Policy) in 2013 and the markets were cut off completely in 2018 (National Sword Policy). Thus throwing U.S. recycling into turmoil from which it is only now recovering.

The recovery is happening (1). At this critical point, cities and counties need sources of renewable capital for the generation of investment in recycling, composting and reuse infrastructure. They also need guidelines for proper investment strategies.

Extended Producer Responsibility – Reimbursement sets fees for packaging and product companies to compensate the local government for the cost of recycling and wasting. In 2021 Maine became the first state to pass this legislation assuring that resources are spent locally in an inclusive manner.

Surcharges on wasting, fee on all waste sent to landfills or incinerators, financed the initial recycling infrastructure in Boulder, CO and Champaign-Urbana, IL. The surcharges program was sunset after recycling got off the ground in the 1980s. In Boulder, the surcharge help start EcoCycle, a thriving non-profit recycling company. In Alameda County, Calif., the surcharge is permanent and today raises $10 million annually for investment in private, community and government recycling entities. The program is run by the county’s Stop Waste agency. Federal legislation could speed up the implementation of surcharges by providing a match to states that pass such legislation.

In Berkeley, Calif., Urban Ore, the iconic materials reuse and recycling company, negotiated a service fee based on the amount of materials the company recovers from the city’s transfer station prior to sending waste to a private landfill. The company now receives $47.50 per ton, the exact equivalent to what the city pays WMI for land filling. The Recycling Partnership, an industry-funded investment fund, recently expressed its support for surcharges and fees to address the plastic crisis and general recycling challenges that face the nation.

If you do not like something, tax it! The European Union has packaging taxes on non-recycled packaging to force producers to use zero waste packaging. Especially needed are taxes on hybrid packaging, especially plastic. Major brands have already pledged to have their products in zero waste packages (compostable, reusable, recyclable) by 2030. Packaging taxes will assure that these pledges, some of which are 30 years old, are kept. California is the first state to consider packaging tax legislation.

State and local budgets can leverage investment funds from the private sector. Colorado and Michigan have initiated NextCycle programs that focus on collaborative investments in state end use capacity. In California there are 40 Recycling Market Development Zones located in urban and rural areas. Companies that locate in the RMDZs are eligible for state grants and loans, reduced sales taxes on energy and equipment, marketing and technical advice. RMDX funds are combined with local economic development funds. Steve Lautze retired director of the Alameda County RMDZ, sees investment in end use capacity as the only way for the state to recover from the Chinese market cut off. “We have to invest in capacity not just collection and processing.”

An estimated $4 billion has been invested in new and expanded secondary paper mills, plastic processing and manufacturing and electronic scrap recovery. Prices have risen sharply in the last six months and appear stable enough to warrant long-term marketing agreements.

Congress is about to make billions of dollars available for social and economic infrastructure investments. The Recycling Is Infrastructure Too Campaign and the American recycling Investment Plan, coordinated by the National Recycling Coalition, Zero Waste USA and the Institute for Local Self-Reliance provide specific guidelines for investment in recycling, reuse and composting. (2)

Key targets of opportunity for locally based recycling, economic development and climate mitigation include:

Bottle bills are a stalwart policy for recovering clean materials at low cost and also greatly reduce street litter, the costliest form of waste management on a per ton basis. Indeed the whole movement toward producer control EPR can be seen as national pre exemption form state and local inspired packaging restrictions, especially bottle bills. States should pass these container deposit laws AND impose quotas for refillablecontainers in each regional market. In upcoming federal legislation, an important issue is whether or not producers and distributors keep the hundreds of millions of dollars in unredeemed deposits or whether these funds stay in the public domain.

Keeping organic material out of the waste stream virtually eliminates methane generation from landfills and greatly reduces toxic chemical soup that leaches from landfills.  Source separated organic materials produce energy in anaerobic digesters, conserve water, sequester carbon, add to soil tilth and provide the flow of top soil for agriculture, landscaping, nurseries and home gardening. It is a local product with nearby strong markets year round.

Landfill and incinerator bans such as in Vermont and Wisconsin keeps recyclable, reusable and compostable from being destroyed. They put these facilities on a diet!

In-town processing of dual stream or properly run and scaled single stream is essential to reduce costs of recycling and allow for jobs, small businesses and the local tax base to thrive. By processing materials and making new products locally or regionally jurisdictions capture full and true economic value of recycling.

Distributed composting, backyard, community and citywide facilities are a key to capturing the value of the largest single component of the waste stream.  Yard debris, soiled paper and foods discards comprise from 3-40% of a typical waste stream.

Ban single-use plastics especially take-out food ware.  Several cities have imposed these bans, which have led to emergence of new reverse logistics companies like R. Cup, Returnity, Dispatch Goods and Sky Kumbucha. These companies allow for ‘reverse channels of distribution’ in which consumers become sources of products for reuse.

Invest in resource recovery parks, which provide industrial space for recycling reuse and composting companies. Austin and Alachua County, Fla. have built their own facilities. As noted California’s Recycling Market Development Zones have been in operation for 30 years. California’s program allows for combined local and state resources to provide grants, loans, sales tax exemptions and marketing and technical assistance.

Investment in reuse centers pays great dividends. Old schools, factories, shopping malls can be home to dozens of reuse enterprises. Saint Vincent De Paul, Lane County, Ore. (3) operates a series of workshop enterprises that repair mattresses, appliances, cars, furniture, mattresses and more. They employ 700 workers and ship repaired goods for sale south to San Francisco and north to Portland, Oregon. Dead head loads bring back inventory for the workshops. Products are sold through thrift store networks. SVDP established the Cascade Alliance, which has a dozen enterprises in the Mid West and along the entire East Coast. The Reuse Corridor serving Ohio, Kentucky and West Virginias is a conglomeration of anchor institutions, local governments, grass roots enterprises and industrial companies that recover an remarkable number of materials (including wicker furniture, number 5 plastic polypropylene through coordinated drop off and dead head transportation. The U.S. Department of Agriculture and the Appalachian Region Commission initially funded the growing network. (4)

Building deconstruction is a growing source of local wealth creation as well as reported in Waste in Our Walls project in San Antonio, TX. The Reuse People coordinates a national network of non-profit and for profit building deconstruction enterprises. Second Chance in Baltimore, is a non-profit deconstruction enterprise with 200 workers, most of who were drawn from the hard to employ residents in the city. The company serves the entire Mid-Atlantic Region and reaches into Ohio for projects and training programs.

Reuse Minnesota has calculated the impressive cumulative environmental, economic and social impacts of reuse in that state.

Reuse is the highest form or recycling as products are revived and productive purpose extended.

Perhaps the poster children for economic growth through reduce, recycling and composting is Austin, TX. After ten years of investment in this sector, the city boasts over 6,000 new jobs and over  $1 billion in economic growth.

U.S. cities large and small have reached 60% and 70% recycling levels using strategies and investments that are available to all jurisdictions in the country. The hardest thing to do in recycling, we have learned, is to start recycling. Common sense and entrepreneurial instincts then take over. This is the ‘Just Do It’ attitude that started grassroots recycling: citizens sponsored drop off, entrepreneurial skills for collection companies and finally municipal recycling forced upon cities by citizens and small businesses.

Let’s do it again. Relocalize recycling. The nation faces worse environmental conditions than in the 1960s when we started recycling. We face two mutually reinforcing crises — every crack and crevice of the earth, including our bodies and food and water are contaminated; simultaneously, our only home, the earth is heating up to the point where life on earth as we know is gravely threatened. Plastic packaging waste is the bell weather for our concerns. We control every piece of packaging and other discards. Every day, whether at play, home or work, materials pass through our hands before it becomes waste. “It ain’t wasted until we waste it,” avers Mary Lou Van Deventer, co-principal of Urban Ore. The China market crisis may have saved us. We can’t rely on others as noted by the Popular Science Magazine War Time Guide, 1942. If Americans don’t do things for themselves then they will do without. And to do without is not the American Way.

We need this generation to reclaim recycling from 20 years of stagnation.

With proper sources of renewable funding and investment guided by organized citizens and small businesses, local governments will be able to assert their natural authority, responsibility and capacity over hundreds of millions of tons of valuable resources. The next generation of Americans will prosper in a Zero Waste economy.

Commentary Traces History of Modern U.S. Recycling and the Potential for Zero Waste 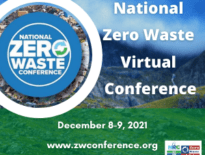 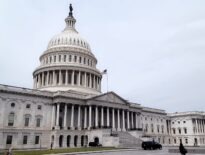