Most microgrids today are single buildings that rely on diesel generators to run when the grid is out. They’re simple backup, redundant power.

But some more advanced microgrids, such as the Clean Coalition’s planned community microgrids, are looking into the future, when multiple sources of generation can support a community of homes and businesses.

In anticipation of the release of ILSR’s new report, “Mighty Microgrids,” ILSR is releasing two podcasts with the developers, regulators, and practitioners of microgrids in the United States today. This is the first.

Intended for Long Island and Hunters Point in San Francisco, these microgrids are designed to to optimize local, rooftop solar energy. That means moving distributed solar to 25 to 50 percent of a local area’s annual energy consumption, a feat unprecedented in microgrid technology today, let alone on the larger electric grid.

Craig Lewis, the executive director of the Clean Coalition, joined John Farrell last week to talk about these microgrid projects, why microgrids are moving beyond use in just single buildings, and what policy changes would help his initiative the most.

In the town of East Hampton, the Long Island Community Microgrid Project will be designed around the distribution network under a single substation, serving several thousand customers, says Lewis. A substation, where cross-country transmission lines move energy to the smaller distribution power lines, is in this case a building block to remaking the electric grid from the ground-up. Specific solar, storage, demand response technologies, and onsite generators will be used to provide almost “indefinite” backup to critical facilities such as a water filtration plant and a firehouse.

“You’re getting the highest performance at the least cost,” says Lewis.

While deferring more than $300 million of new transmission investment for the local utility, PSEG Long Island, all 15 MW of the local solar will be procured through a feed-in tariff. Property owners and third parties renting roofs will be directly reimbursed for their power production. In all, the Clean Coalition estimates that of every dollar invested here and at their Hunters Point Community Microgrid, 50 percent will remain local, largely in the form of local wages and jobs. 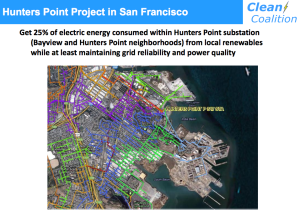 Microgrid rules across the states support only behind-the-meter microgrids, those that serve only one building’s load and do not produce excess energy for other entities. In its Reforming the Energy Vision, the New York Public Service Commission is beginning to encourage by microgrids to produce energy for more than one user. In the end, the NY PSC seeks to reform electric utilities into grid market operators that will be disinterested in who owns, sells, and distributes electricity. While the NY PSC has been quick to incentivize third-party ownership, Lewis acknowledges there needs to be more work done on the technological end.

“If you try to design market mechanisms before you know what the technologies are capable of, you end up with very suboptimal outcomes,” says Lewis. There is a need still to incentivize everybody to cooperate, including the incumbent utility, to understand the full extent of the benefit to the ratepayers. Then regulators can design market incentives to award microgrids and other distributed resources.

Tension in the Wires

Right now distributed energy resources represent a small, small precentage of the total annual energy usage across the United States. But as distributed energy such as rooftop solar becomes cheaper and more common, more microgrids will come online. In the end, the need for large power plants and transmission lines will decline

“You can’t local resilience if you’re getting all your resources from remote locations,” says Lewis.

One big boost to microgrid development would be the creation of a distribution-level wholesale energy market for distributed energy, and not just in terms of pure power, or kilowatt-hours, generated. “The default has been to reward kilowatt-hours,” says Lewis. “That’s real power. But there’s also reactive power. There’s also grid services to provide frequency.” 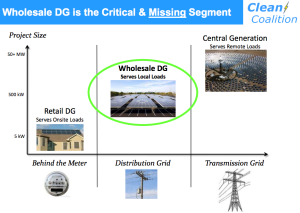 You can serve your own loads, or build a huge power plant to serve the wholesale market over transmission lines…
but there is still no local wholesale market for serving energy to your neighbors.

That means the market must be designed to reward frequency balancing and voltage support.

When it comes to providing frequency balancing, the most important metric is speed. There’s nothing that can react faster than local energy storage, both in discharging and storing excess energy. A fossil-fueled power plant cannot react fast enough to sudden local load changes.

In addition, distributed energy better supports voltage than centralized generation. Voltage decays over while being sent on long transmission and distribution lines.

It seems that local, distributed energy is getting a play within microgrids, and within the next few years, the Clean Coalition’s community microgrids hope to show the full potential of community power.

More information on the Clean Coalition’s Community Microgrid Initiative and their other initiatives can be found on their website.

This is the 29th edition of Local Energy Rules, an ILSR podcast with Director of Democratic Energy John Farrell that shares powerful stories of successful local renewable energy and exposes the policy and practical barriers to its expansion. Other than his immediate family, the audience is primarily researchers, grassroots organizers, and grasstops policy wonks who want vivid examples of how local renewable energy can power local economies. 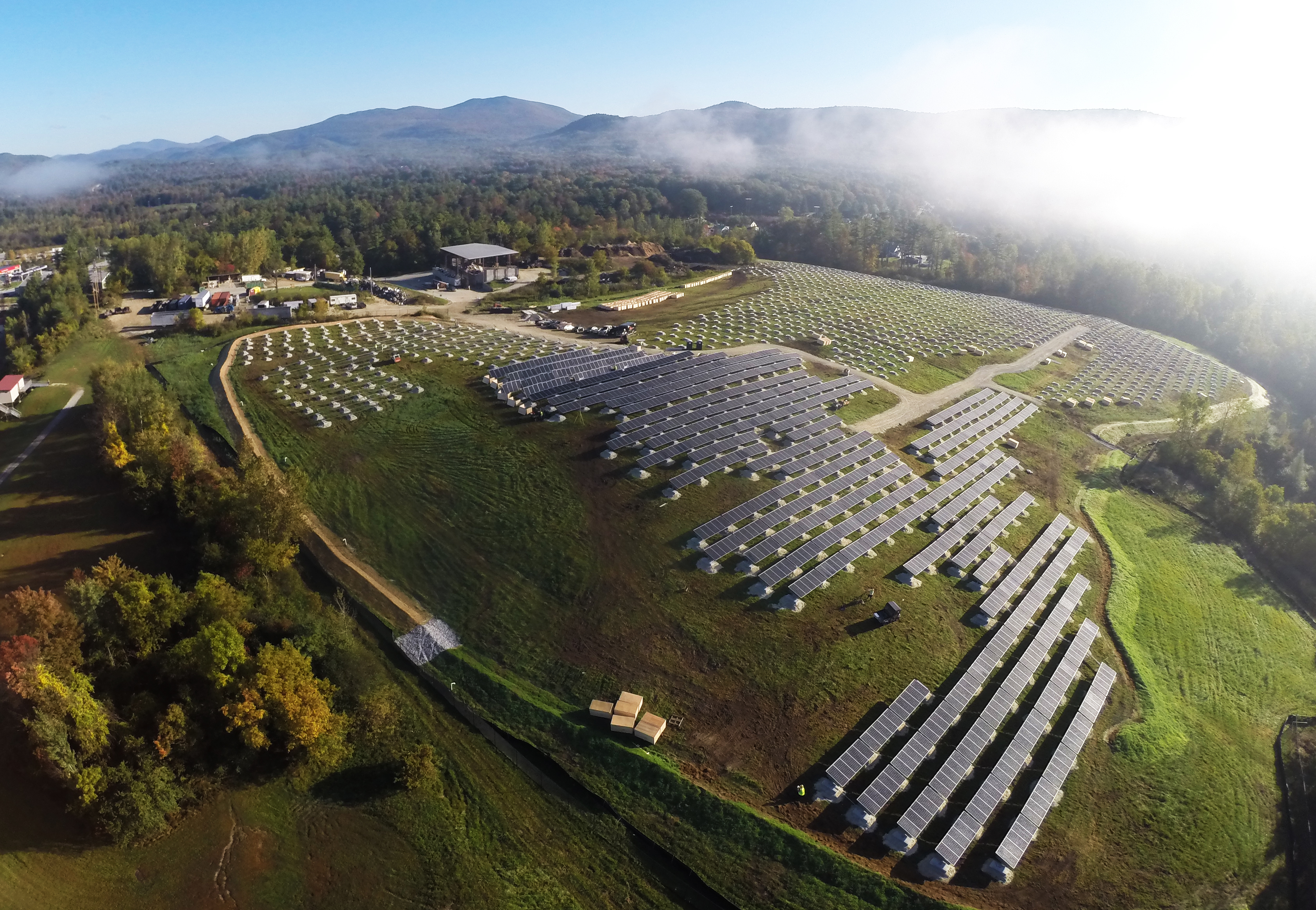 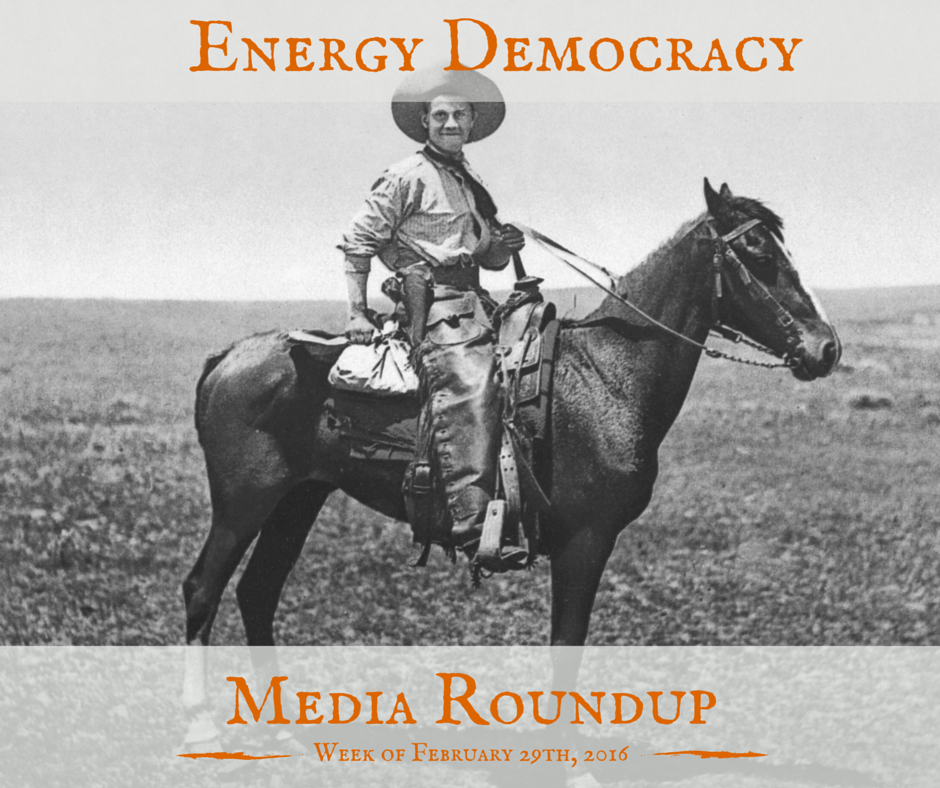