After three years of debate and a voter referendum that demonstrated strong opposition to sprawling shopping centers, Carbondale, Colorado, has enacted an ordinance that requires the town’s planning staff and Board of Trustees to weigh the community and fiscal impacts of a large-scale retail proposal before deciding whether to approve or deny the project. The ordinance applies to any retail development larger than 15,000 square feet in neighborhood business districts or larger than 30,000 square feet elsewhere.

Carbondale, a community of 5,200 people in the Roaring Fork Valley between Glenwood Springs and Aspen, has a lively downtown of locally owned businesses, including hardware, book, and clothing stores. Three years ago, a developer proposed building a 252,000-square-foot shopping center anchored by a Target superstore on the edge of town. The center would have been about the size of all of the town’s existing retailers combined.

Citizens and local businesses fought the development. A grassroots group, Mountain Folks for Global Justice (MFGJ), urged the Board of Trustees (equivalent to a city council) to reject the project and proposed two ordinances that would cap the size of stores at 60,000 square feet and establish impact standards for those over 20,000 square feet.

The Trustees eventually approved the shopping center, but their decision was overturned last July through a ballot initiative. In November, the Trustees passed a modified version of the impact ordinance proposed by MFGJ.

The ordinance requires developers to submit information and meet criteria for five types of impact: environment, traffic, community, fiscal, and utility. The fiscal impact analysis is performed by a consultant selected by the city. Developers pay a $4,500 fee to cover costs.

Under the standards, retail developments may not place more demand on public services than they generate in tax revenue, negatively impact water quality, create excessive traffic congestion, or over-burden utilities and infrastructure. The review also considers how the project would affect the availability of affordable housing (i.e., whether new low-wage retail jobs would create a shortage of affordable units) and whether its design reflects Carbondale’s character.

The standards are less stringent that the ones originally proposed MFGJ. For example, MFGJ’s proposal called for the city to consider how a development would impact employees at existing businesses and whether there would be a net increase in the number of jobs. 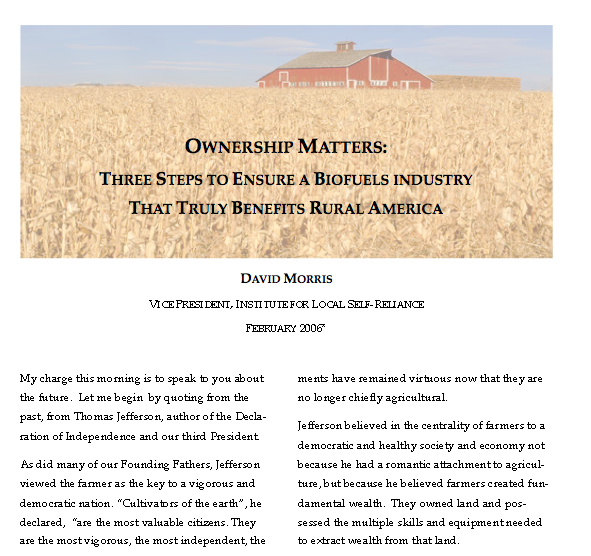