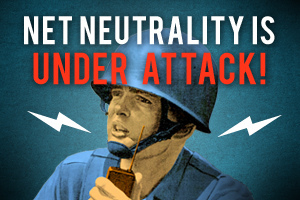 To try to stop the Network Neutrality rules established earlier this year, big cable has filed suit against the FCC in the U.S. Court of Appeals for the D.C. Circuit. Advocates have drafted a brief to let the court know that the people are not willing to give up Network Neutrality. In a matter of days, that brief will be filed with the court.

We urge you to read the brief and sign on to show your support. Then spread the word on social media, email, and word of mouth, so we can present the brief with as many signatures as possible.

Without Net Neutrality, the big cable companies would control the Internet, and make it harder for us to access information that doesn’t align with what’s best for the companies’ bottom lines or that disagrees with their political leanings. If Net Neutrality weren’t the norm, we might even have been blocked from engaging in the online activism that helped secure the Net Neutrality rules that we’re now working to defend!