Earlier this year, the state of California announced a $10 million loan-loss reserve to solve the Federal Housing Finance Agency’s severe restrictions on using property-tax based financing for energy efficiency and renewable energy on residential property.

It’s a great concept, but evidence from on of California’s best property assessed clean energy (PACE) programs suggests the reserve should be three times larger, at a minimum.

An Innovation in Energy Efficiency Financing

PACE was a concept pioneered by Cisco DeVries in 2009 in Berkeley, CA, meant to solve two problems of making homes more energy efficient:

1) The average American moves every 5 years, less than the loan term or life of a typical energy efficiency retrofit

2) Getting information about energy savings opportunities is a challenge, and information is very disjointed.

The solution? A city-sponsored energy efficiency effort that allowed homeowners to repay energy efficiency and renewable energy improvements fixed to their property via their property taxes. The city would be a one-stop shop, homeowners would have simplified financing via a bill they already pay, and the cost (and benefit) of any improvements would pass to future owners of the property.

The Feds Slam on the Brakes

PACE was taking off big-time in 2010 when the Federal Housing Finance Agency (FHFA) issued “lender letters” saying that the liens (loans) taken against the property when doing PACE-sponsored retrofits were a threat to mortgage lenders, and that they would not buy or refinance mortgages on properties with PACE improvements (because PACE loans were senior to – paid before – the mortgage).

Why FHFA Was Wrong

Evidence from the $40 million in PACE-financed residential energy projects suggested that default rates were far below that of traditional mortgages (less than 1 percent), and that owners of energy efficiency homes were one-third less likely to default than owners of traditional homes. After all, energy saving improvements provided revenue for homeowners to repay their loan.

Despite the evidence (and a lawsuit), FHFA’s revised rules, released in 2012, doubled down on their PACE hate.

A Few Programs Soldiered On

While many of the existing residential PACE programs closed up shop, a few worked around the FHFA roadblock by providing homeowners with a robust disclosure. Others tried making the lien junior to the mortgage (but also less attractive to investors).  In Sonoma County, and the Western Riverside area of California, hundreds of homeowners (particularly those who had no mortgage) were able to move ahead with PACE financing.

However, while PACE for commercial property – unaffected by the lender letters – continued to grow apace, the federal ruling gutted the opportunity for PACE to add momentum to the residential energy savings market.

The $10 million loan loss reserve in California ostensibly solves the lender problem. The fund will hold lenders harmless in event of a default. But based on progress of the PACE program on Sonoma County, CA, California’s state loan loss fund needs to be at least three times as big.

In their September 2013 report, the Sonoma County Energy Independence Program reported an average residential project cost of $28,000. If we assume a default rate of 1% (higher than the actual) for PACE projects, then California’s $10 million reserve can cover $1 billion of residential PACE projects. It seems like a lot, but that’s only 35,700 average projects (based on Sonoma county), out of approximately 9.5 million housing units that are not multi-family, or 0.37% of all properties.

The Sonoma County program already served 1558 projects by the fall of last year, nearly 1% of the county’s single-structure housing units.

In other words, California’s reserve fund is likely to be used up in a hurry, especially given the opportunity to serve the pent-up demand created by the FHFA’s four-year lull.

It’s a great concept and a good start, but when Fannie and Freddie put their boot on your neck, you’ll need more than a modest loan reserve fund to get property-based financing for residential property back in the race. 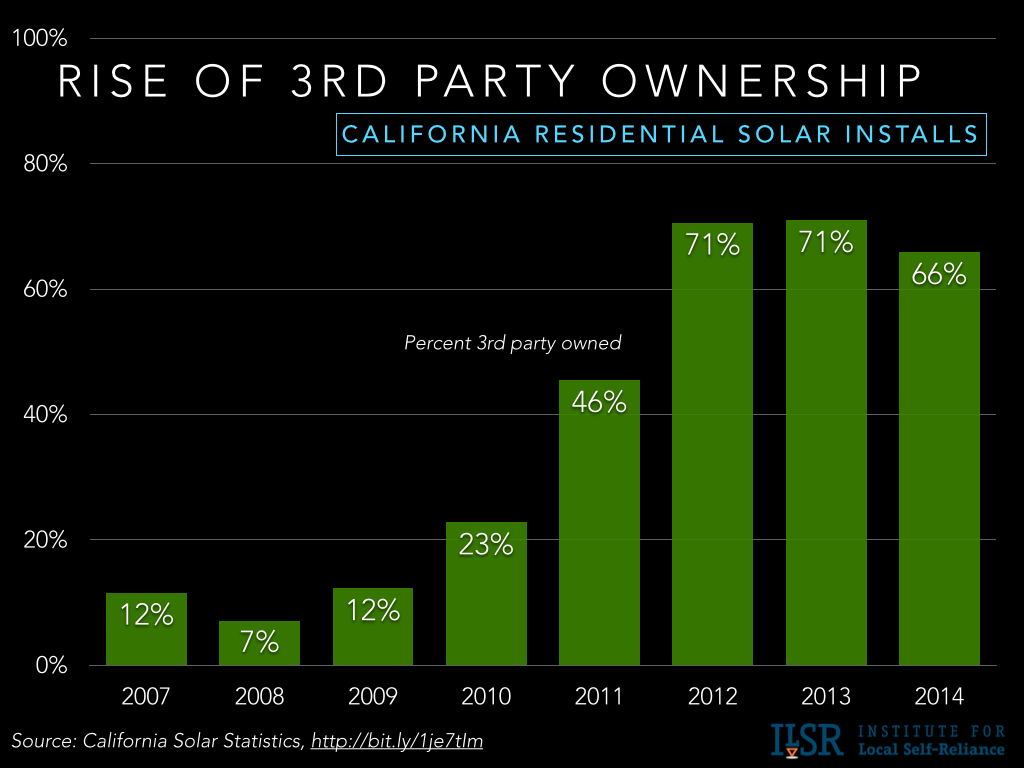 Energy Is Solar Ownership Poised for a Comeback?
Sign Up For Energy Democracy News