Even without a pandemic, independent restaurants operate on super-thin margins. Now the Covid-19 pandemic is stretching them to the limit. Nationwide, April’s restaurant and bar sales were a scant 51 percent of what they were a year ago (see chart below). And the restaurant industry has lost more jobs than any other industry in America. In March alone, the industry laid off or discharged 4.4 million workers, 38 percent of all layoffs in the nation that month.

With head-spinning speed, many restaurants have pivoted to offer carry-out meals, sell groceries, and add new services. But even as Americans are rallying to support them, local restaurants are struggling with a new problem that could sink them. As more of their business shifts to home-delivery, they are at the mercy of delivery apps, such as Grubhub and Uber Eats, which routinely charge restaurants fees of 30 percent or more. As a result, many restaurants offering takeout during the pandemic are losing money.

Now, nearly a dozen cities are biting back by capping the fees the apps can charge restaurants, and city and state leaders are scrutinizing their business models for predatory behavior.

DoorDash, Grubhub, Postmates, and Uber Eats dominate the restaurant delivery market, accounting for 97 percent of market share in 2019. In May, news broke that Uber has made an offer to buy Grubhub. The companies are now reportedly hashing out details of the all-stock deal. The merger would give the combined company more than half of the nation’s third-party food delivery market.

Grubhub and Uber Eats are publicly traded, and DoorDash and Postmates are considering going public soon. All four of them have market valuations above $1 billion. Most of them are growing because of massive venture capital investments; so far, only GrubHub has turned a profit.

These apps also own other brands, making their market reach even greater than most people realize. Grubhub, for example, owns Seamless, Eat24, Levelup, Tapingo, MenuPages, and AllMenus. DoorDash owns Caviar.

Almost all delivery services charge restaurants a base percentage commission rate for being listed on the service’s website (typically between 20 and 35 percent). In addition, the apps charge delivery fees, credit card processing fees, and fees for running special promotions. And they charge for taking orders by phone. Phone calls over a certain length (say 45 seconds) trigger a fee — even if it does not result in an order. A gastropub in New York reported that it received more than 50 orders from Grubhub from January 4 to April 20. Only a third of them were actual orders; the others were just customer questions. But Grubhub charged them for all the phone calls anyway.

All of these fees add up quickly. Last month, restaurant consultant Giuseppe Badalamenti posted a photo on Facebook of a Chicago restaurant’s March invoice from Grubhub. After deducting its fees from $1,046 in orders, Grubhub paid the restaurant just $377. “Stop believing you are supporting your community by ordering from a 3rd party delivery company,” Badalamenti said. The post has gone viral.

This scenario is becoming much too common. Grubhub charged the owner of Evansville, Indiana’s Spudz-N-Stuff $4,869 on $10,788 of orders, for fees, commissions, and order adjustments. Jason Dicken, the owner, would have netted $3,000 more if customers had simply called his restaurant to place their orders.

In general, independently owned restaurants pay more because the large chains, like Sweetgreen and McDonalds, are able to negotiate better deals.

On top of all the fees, the big delivery apps also have a track record of other kinds of predatory behavior. Last year, The Counter reported that Grubhub has registered 23,000 web domains, including fake websites that mimic those of their restaurant partners and redirect orders through the apps’ own platforms. Grubhub earns a commission of 3 to 15 percent when customers place an order this way. If customers order directly from the restaurant, Grubhub does not pay an order processing fee.

Even before the Covid-19 pandemic, cities had started pushing back against the predatory pricing practices of meal delivery services. Last June, New York City’s Small Business Committee held hearings about the high commissions the apps charge. The Covid-19 pandemic has added rocket fuel to the fire.

Boston and Los Angeles are both considering fee caps. Baltimore has asked the four major meal delivery apps to voluntarily reduce their fees to 15 percent. And even more legislative action is on the horizon. California and Rhode Island are considering laws that would prohibit meal delivery apps from creating fake websites for restaurants that are not their customers. The Texas Restaurant Association is asking people to contact their mayors and push for them to cap fees and prohibit surprise charges. Meanwhile, three New York City restaurant customers have launched a class-action lawsuit against DoorDash, Grubhub, Postmates, and UberEats claiming that requiring restaurants to charge customers the same amount for dining in and delivery violates antitrust laws.

Congressional lawmakers are taking notice, too. News of the proposed Uber-Grubhub merger drew quick rebukes on Capitol Hill. U.S. Rep. David Cicilline (D-RI), who chairs the House Antitrust Subcommittee, called Uber’s offer “a new low in pandemic profiteering.” U.S. Sen. Amy Klobuchar (D-MN) tweeted “If Uber takes over Grubhub it isn’t good for competition and it isn’t good for you. When big companies corner the market it usually means more for them and less for you, especially in a pandemic.”

The delivery apps have tried to deflect the growing scrutiny by making some minor — and, for the most part, deceptive — concessions. DoorDash and Caviar have agreed to cut commissions in half while states of emergency remain in effect. Uber Eats announced that it is waiving delivery fees for customers altogether until June 30 — but its announcement failed to mention that it is not waiving fees for restaurants. Grubhub announced it will defer commission payments for some unspecified period of time, up to as much as $100 million, but it will continue to charge delivery and processing fees. And, according to its terms and conditions, it plans to collect those deferred commission payments as soon as the relief period ends.

Meanwhile, restaurant owners continue to urge their customers to order directly from them, rather than using a meal delivery app. Some are hiring their former servers to make deliveries. Chef Ashish Alfred, who owns three restaurants in the Baltimore-Washington area, has taken to Instagram to encourage customers to place orders directly through the restaurant. In an interview with Politico, he lamented, “These are multimillion, sometimes billion-dollar companies that don’t need that extra money that could really be helping us out right now.” 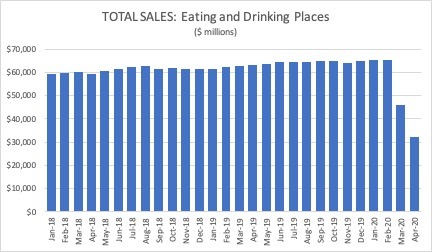 Kennedy Smith is a Senior Researcher for the Institute for Local Self-Reliance's Independent Business Initiative. Her work focuses on analyzing the factors threatening independent businesses and developing policy and programmatic tools that communities can use to address these issues and build thriving, equitable local economies.

Kennedy Smith is a Senior Researcher for the Institute for Local Self-Reliance's Independent Business Initiative. Her work focuses on analyzing the factors threatening independent businesses and developing policy and programmatic tools that communities can use to address these issues and build thriving, equitable local economies.

Sign up to get a monthly update from us with the latest research and news.
agriculture

Biting Back: Delivery Apps are Gobbling Up Restaurant Revenues, and Cities Have Had Enough 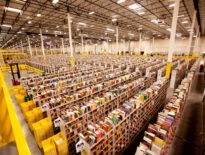 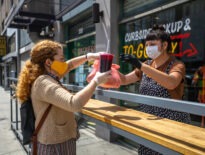