By Stacy Mitchell and Jim Gile, originally published in the Times Union, June 19, 2008

The Capital Region’s future would be much better served by fostering the growth of locally owned businesses, rather than chasing after big-name national retailers, as was suggested in Chris Churchill’s May 11 article, “Trendsetter shops bypass region.”

Part of the answer is that they spend a larger portion of their revenue on local payroll. Because they do not rely on a staff at a distant corporate headquarters, they employ more people locally to manage and operate the business.

The other factor is that local retailers tend to buy more goods and services from other local businesses. They bank at local banks. They get their printing done locally. They hire local accountants and other professionals. They source more of their inventory from local and regional suppliers.

Gile Companies, a 30-year-old family-owned business in Albany, is a good example of this. We rely solely on local banks for our financial needs. Our accounting is done locally, as is all of our printing. Even the coffee we provide for our staff is roasted at the Daily Grind on Lark Street. For lunch, catering and business dinners, we turn to local restaurants like Carmine’s on Central Avenue.

The businesses we rely on, in turn, spend much of their revenue locally, including with us. Carmine’s, for example, buys office supplies from us and hired our technology company, WSG, to build and maintain its Web site. National chains have little need for local goods and services.

Most of the money that flows into these stores leaves the region. Capital Region residents only have so many dollars to spend. Should a new wave of national chains divert an even larger share of these dollars from locally owned stores, that would mean a sizable loss to the region’s economy. Taking the opposite approach — strengthening local businesses and fostering new ones — would instead lead to growth in many other sectors of the region’s economy.

Rather than succumbing to more of the cookie-cutter development that has engulfed so many cities, the Capital Region ought to play to its unique strengths. Cities that stand out from the crowd have a distinct advantage.

Downtown Saratoga Springs, which was cited in the article, owes much of its success to its many independent businesses. These shops and restaurants are the foundation of the city’s character. The rest of the Capital Region should draw inspiration from this, and use these tried-and-true principles for growth opportunities.

What drives people’s choices about where to buy a house, where to put down roots and where to start a business are what makes a place special. These might be cultural and natural amenities, but just as often, they are the kinds of small businesses that make daily living more enjoyable. They’re the neighborhood bakeries, the lively independent bookstores, the local hardware stores that excel in personal service.

The Capital Region should look upon its locally owned businesses as valuable assets well worth preserving and growing. And there are plenty of opportunities to nurture a new crop of local stores, if the region opts to put its focus there rather than on trying to attract more chains.

After a decade of sharp decline, more than 300 new independent bookstores have opened nationwide since 2005, according to the American Booksellers Association. Independently owned green grocers and specialty food markets are expanding. Local hardware stores are making a comeback too, according to Ace Hardware, a buying cooperative for independents. Ace has added hundreds of stores recently, especially the kind of urban retailers that Churchill’s article might suggest the Capital Region is lacking.

Capitalizing on this trend in favor of local enterprise would deliver far greater benefits for the Capital Region than chasing after more chains. 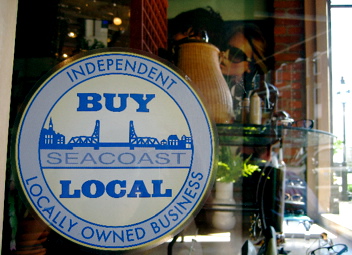