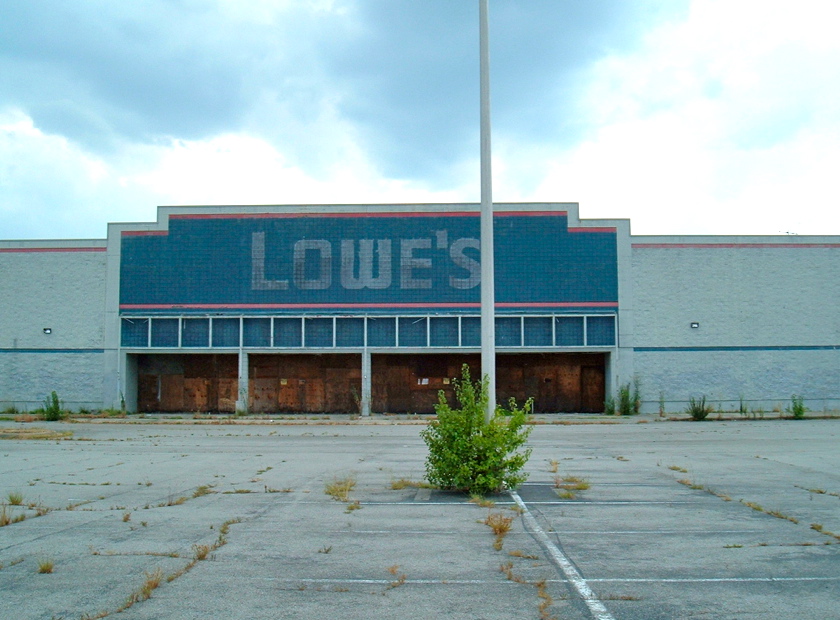 Abandoned big-box stores, dead and dying strip malls and empty storefronts are about to join foreclosed houses as one of the defining features of the American landscape in 2009.

Within a few months, more than one-eighth of the country’s retail space will be sitting vacant, according to some estimates. That’s about 1.4 billion square feet, or 50 square miles, of empty store space, ringed by roughly 150 square miles of useless parking lot.

It will be tempting to blame the weak economy for all of this wreckage. But the recession has merely been the trigger. This avalanche of vacant retail, much like the mortgage crisis, has been a long time in the making.

Since the early 1990s, the pace of retail development has far outstripped growth in spending. Between 1990 and 2005, the amount of store space in the United States doubled, ballooning from 19 to 38 square feet per person. Meanwhile, real consumer spending rose just 14 percent.

With big chains, like Wal-Mart, Target and Home Depot, leading the way, retail development became, to a large extent, a predatory enterprise. Waves of ever-bigger big-box stores and new shopping centers have succeeded, not by satisfying growing demand, but by cannibalizing sales, first from downtowns and older malls, and then from other recently built shopping centers and big-box stores.

City officials have been largely complicit in this merry-go-round. Many have clung to the idea that building new stores creates jobs and tax revenue, when all most of these projects do is siphon economic activity from other parts of town. By zoning plenty of open land for retail, cities have given developers little incentive to redevelop older shopping centers. Why bother when fresh ground waits a mile up the road?

Long before the financial crisis hit, PricewaterhouseCoopers had deemed the United States vastly “overstored.” In a 2003 report, the investment research firm declared that the “most overretailed country in the world hardly needs more shopping outlets of any kind.” But few cities heeded that warning. Indeed, even as the economy began to slow in 2007, retail development continued at a furious pace, with more than 140 million square feet of new shopping centers and big-box stores opening.

We now face a painful reckoning. Already, many communities are saddled with dying malls and derelict big-box stores. In Minnesota, abandoned Wal-Mart stores have been sitting idle in Albert Lea and Owatonna for years, while Brookdale, the mall in Brooklyn Center, is fast approaching 50 percent vacancy.

The situation is likely to get much worse in the coming months as major chains and smaller retailers close tens of thousands of outlets nationwide.

Vacant stores are not only eyesores. These blighted properties can drag down home prices in surrounding neighborhoods, undermine otherwise healthy businesses nearby and deter new investment.

Sometimes cities manage, often with a great deal of effort, to find a new use for one of these sites, but most abandoned big-box stores and strip malls remain that way for years. These buildings are not particularly suited to activities other than retailing, and there are far more of them than potential uses.

The only way to ensure that the coming wave of deserted stores and shopping centers does not become a persistent blight on the landscape and a drag on local economies for decades to come is for cities, working together across metro regions, to sharply limit what can be built on undeveloped land.

If colonizing fresh land were no longer an option, developers would be far more likely, once the recession ends, to recycle idle malls and vacated big-box stores. These constraints would also encourage more efficient use of land. Single-story box stores with surface parking would give way to multistory buildings that mix housing with retail.

Indeed, this is precisely what is happening in Oregon, where urban growth boundaries limit sprawl and protect the countryside from development.

In the Portland metro, developers are eyeing aging strip malls built in the 1960s and ’70s as sites for new multistory buildings that would combine housing on the upper floors with retail below. According to one estimate, as much as 70 to 80 percent of the metro region’s growth could be accommodated by redeveloping empty or underused properties.

It’s too late to prevent the rash of retail vacancies that will emerge in the coming months, but, by putting an end to years of massive overbuilding and sprawl, we can ensure that these sites are first in line for redevelopment.