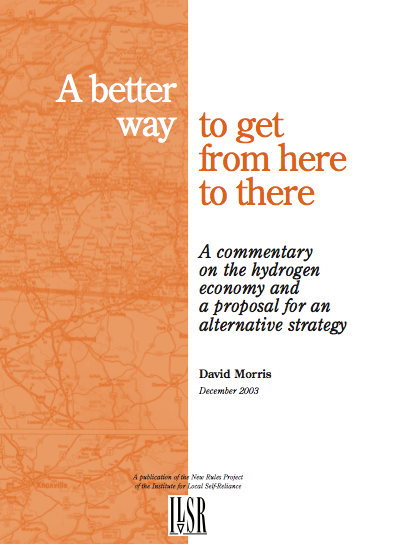 The idea of a hydrogen economy has burst like a supernova over the energy policy landscape, mesmerizing us with its possibilities while blinding us to its weaknesses. Such a fierce spotlight on hydrogen is pushing more promising strategies into the shadows.

The hydrogen economy is offered as an all-purpose idea, a universal solution. However, in the short and medium term a crash program to build a hydrogen infrastructure can have unwanted and even damaging consequences. This is especially true for the transportation sector, the transformation of which is the primary focus of hydrogen advocates and the highest priority of federal efforts.

The focus on building a national hydrogen distribution and fueling network to supply fuel cell powered cars ignores shorter term, less expensive and more rewarding strategies encouraged by recent technological developments. The most important of these is the successful commercialization of the hybrid electric vehicle (HEV).

The HEV establishes a new technological platform upon which to fashion transportation- related energy strategies. Its dual reliance on electric and gasoline propulsion systems allows and encourages us to develop a dual energy strategy that expands the electricity storage and propulsion capacity component while rapidly expanding the renewable fuels used both for the electricity and engine side of the vehicle.

The current hydrogen economy strategy focuses almost entirely on the engine side of the hybrid with its inherent ramifications: the creation of a nationwide production and delivery system for hydrogen and the commercialization of a fuel cell car that can use pure hydrogen. A lower cost strategy with a quicker payoff and impact would focus on expanding electricity storage side and substituting biofuels for gasoline. HEV’s overcome the key performance liability of all-electric cars: short driving range. But the current generation of HEVs lack the ability to operate solely on batteries. Electricity is used to reduce or eliminate energy losses due to idling and stopand- go driving in urban areas. Manufacturers should be strongly encouraged to quickly develop the next generation of HEVs that can travel significant distances on battery power alone. Rapid advances have occurred in recent years in electric storage technologies.

Extending the HEVs electricity-only driving range should be accompanied by a simultaneous strategy that expands the use of renewable energy to fuel both the motor and the engine. On the electricity side, this means dramatically expanding the generation of electricity using wind, sunlight and other renewable fuels. On the engine side it means dramatically expanding the use of sugar-derived biofuels. More than 4 million variable-fueled vehicles are already on the road. They can operate on any combination of ethanol and gasoline. The cost of modifying vehicles to allow them this multiple fuel capacity is small, about $150 per vehicle compared to the tens of thousands of dollars additional cost of a fuel cell vehicle. The cost of developing a network of fueling stations capable of delivering biofuels as a primary fuel (50-100 percent) rather than the current, 6-10 percent additive is a tiny fraction of the cost of establishing a network of hydrogen fueling stations, about $50,000 for a biofuel refueling station versus some $600,000 for a hydrogen refueling station.

Currently in the United States ethanol is made from sugars extracted from corn. In the future the sugars will come from far more abundant cellulose materials like corn stalks and wheat straw and grasses and kelp. A sugar economy would not only reduce the nation’s dependence on imported oil but would create the potential for designing a low cost agricultural policy that benefits domestic and foreign farmers alike.

For the foreseeable future, even the hydrogen economy’s most ardent supporters concede that theirs will be a high cost strategy ($2.50 to $12 per gallon of gasoline equivalent) based on nonrenewables and likely to increase the emissions of greenhouse gases. These advocates argue that in the long term these various costs can be reduced or eliminated. Technically that may be so. But hydrogen’s high cost, poor energetics and scant environmental benefits for the near and medium term future must be taken into account when evaluating it against alternative fuels and strategies.

Some environmentalists have criticized biofuels for their cost and modest net energy yields. Yet hydrogen costs are higher than biofuels even when the latter’s subsidies are eliminated. And hydrogen production and distribution has a negative net energy yield. Finally, while electric batteries have a high cost compared to gasoline they are a lower cost storage medium than liquid or compressed hydrogen.

A dual strategy (improvements in electricity storage, electronics controllers and software accompanied by an aggressive fuel substitution policy) has many advantages over a hydrogen focus. It is cheaper, less disruptive and more resilient. It can have a more dramatic short-term impact. It can allow us to tackle multiple societal problems (e.g. the plight of farmers and rural economies) at the same time.

One can argue that this is not an eitheror situation. We can promote hydrogen while promoting more efficient vehicles and renewable fuels. But we have scarce financial, intellectual and entrepreneurial resources. Dramatic improvements in the efficiency of our transportation fleet via the introduction of advanced and plug in hybrids and the expansion of renewable fuels to substitute for gasoline can occur incrementally using the current production and distribution systems. For a hydrogen economy to have any impact the nation must change virtually every aspect of its energy system, from production to distribution to the design of our gas stations and our cars.

We may be on the verge of spending hundreds of billions of dollars and diverting enormous amounts of scarce intellectual and entrepreneurial energy to create an infrastructure based on nonrenewable fuels in the hope that after it is in place we might fuel it with renewable energy.

The chicken-and-egg problem of building an infrastructure to allow the hydrogen economy to emerge, even if the initial basis of that economy is nonrenewable fuels has already enticed environmental and renewable energy advocates into a series of unfortunate compromises. For example, to jumpstart a hydrogen fueling system the Minnesota legislature in 2003 declared natural gas to be a renewable energy resource so long as it is used to make hydrogen. In 2003 the California Air Resources Board (CARB) declared a fuel cell car superior to a plug-in hybrid vehicle even though the former would consume more fossil fuels than the latter.

A crash program to switch to electricity/ biofuel powered vehicles should take into account social and economic issues. The transition should not only expand renewable energy use but do so in a way that maximizes the benefits to hard-pressed rural economies here and abroad. This is best accomplished by having the power plants locally owned.

There is another important reason to treat scale and ownership issues seriously: the concentration of market power. Archer Daniels Midland (ADM) generates about 40 percent of the ethanol produced in the country and dominates nationwide distribution. Although its share has dropped in the last 10 years with the rapid growth of smaller and medium-sized ethanol facilities, many of which are farmer owned, it remains a worrisome situation. This is especially so because of ADM’s past involvement in price fixing and its aggressive exercise of market power.

A decision to focus on an electricity/biofuel path for the transportation sector does not preclude the rapid deployment of fuel cells. Indeed, the fuel cell economy is developing rapidly without a hydrogen distribution network. Fuel cells have the attractive potential of decentralizing and democratizing the electricity system, reducing system costs and lowering the likelihood of repetitions of widespread blackouts like the one that occurred in the northeastern United States in August 2003. A fuel cell economy does not depend on a hydrogen economy as currently envisioned.

The strategy currently envisioned to effect a hydrogen economy may be diverting significant intellectual, financial and political resources from more attractive strategies. Before we take that leap, we should take a long hard look at the premises and promises of the hydrogen economy and at the other alternatives available that could achieve the same goals more quickly and cheaply.

Report: A Better Way to Get From Here to There – A Commentary on the Hydrogen Economy