When cities have done their part to power the community with clean electricity, the final push of the clean energy transition rests on individuals. Still, individuals can come together, pass innovative local policy, and hold themselves accountable to a clean and equitable ethos.

In this episode of the Local Energy Rules Podcast, host John Farrell speaks with Ben Paulos of the Berkeley, Calif. Energy Commission. Paulos and the commission have given the community a chance to put its money where its mouth is with a “climate equity action fund” on the ballot this November. Farrell and Paulos discuss how voting yes to Measure HH is a step toward the city’s zero carbon emissions goal — all while centering energy equity.

Hear East Bay Clean Power Alliance Coordinator Jessica Tovar explain how EBCE was established, and what it does for the community, in episode 98 of Local Energy Rules.

Having a clean electricity supply, Berkeley is left to address its transportation and building emissions — and the city can only do so much. Some of the clean energy transition must be carried by individuals, households, and businesses.

Ben Paulos, an energy professional, joined Berkeley’s energy commission after the city announced it would be fossil fuel-free in 10 years. He hopes to help the city get there — but how? By creating a fund for energy equity and climate action.

We need some money to pay for all of these great things that the city says they want to do… that was really the genesis for the Climate Equity Action Fund, to put our money where our mouth is.

Utility customers in Berkeley are already charged a 7.5% utility user tax. To increase equity, Measure HH exempts low-income customers from this tax and increases it for everyone else. Low-income households will be identified by their subscription to California’s CARE or FERA rate discount programs. Paulos estimates that the tax exemption will save 5,000 utility customers $160 each.

Increasing the tax on other customers — to reach approximately $4.00 per month, depending on energy use — will raise about 2.5 million dollars a year. Plus, as Paulos reiterates, this money will be returned to the customers as rebates for their electrification, clean energy, and energy efficiency improvements.

It’s really a collective action to get ourselves to take responsibility and to move on climate change.

Berkeley was the first city in the country to ban gas hookups to new, multi-family buildings. However, Paulos says that there is little new construction in Berkeley. To be truly fossil fuel-free, the city needs to address gas use in existing buildings.

The Climate Equity Action Fund can support homeowners, and others, who are willing to trade out gas appliances for their electric counterparts. The fund could also pair with energy efficiency support from the state of California, which now recognizes the value of fuel switching.

Stubborn utility companies often present a barrier to progress, but in this case, utilities are unopposed. Paulos explains that since Pacific Gas & Electric is both a gas and electric utility, it does not fight fuel switching — it will make up losses in gas sales with more electricity sales.

One anti-taxing group opposes Measure HH, but Paulos says that “here in Berkeley, that’s practically an endorsement.” He believes Berkeley residents are unafraid of taxes — provided the city does good things with their money.

Many cities are utilizing taxes and fees to create funds for their climate and clean energy goals.

Farrell draws attention to several, including Minneapolis’s Franchise fee (a fee on the utility), the Portland Clean Energy Fund (a surcharge on big businesses), and Seattle’s JumpStart Tax (a payroll tax on high-level corporate employees). Paulos adds that Denver has a climate fund sales tax on the ballot this fall.

If we could count on the federal government to do all of this for us, if we had a national carbon tax and national renewable energy laws and EV policies and so on, then they’d probably be a lot less concerned at the local level — but that is absolutely not happening.

How Should Cities Use their Clean Energy Funds?

Cities take action reflective of their values, says Paulos. Berkeley Measure HH, if passed, will demonstrate the city’s commitment to advancing equity as it decreases its carbon emissions.

Once Berkeley has the money, it will have to plan how to use it. Paulos believes that the commission should review outside proposals, taking care that everyone gets the opportunity to pose an idea — not just the loudest or most connected individuals.

Paulos hopes that the Berkeley Climate Action Equity Fund demonstrates a “next step” for other cities that, like Berkeley, have clean energy goals or climate emergency declarations.

This is episode 115 of Local Energy Rules, an ILSR podcast with Energy Democracy Director John Farrell, which shares powerful stories of successful local renewable energy and exposes the policy and practical barriers to its expansion. 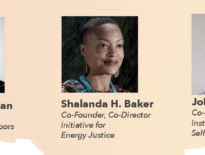 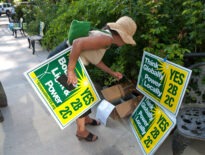