Republicans should stop terrifying the nation by proposing to slash a trillion dollars in spending on the elderly, the sick, the poor, the young, low paid workers and the environment. Congress could slice the deficit without making much of the nation insecure. But that would demand the kind of political courage both parties conspicuously lack. It would mean taking on the Pentagon.

“Much of the money wasted by government is wasted by the military,” asserts long time bureaucracy watcher Charles Peters, editor of The Washington Monthly. Could anyone disagree? Remember the $400 hammer, the $600 toilet seat, the $7600 coffee pot? Those are symptoms of a deeper disease. According to the Government Accounting Office the military can’t account for more than $30 billion in past expenditures and can’t find vouchers for about $1 billion a month in current expenditures.

Republican Senator Charles Grassley of Iowa rightly asks, “Why is it that members of my side of the aisle send their management principles on vacation whenever the defense budget is mentioned?”

Other federal agencies waste thousands of dollars. The Pentagon wastes millions and billions. Last year the military spent $2 million to transport Air Force Academy cadets to and from sporting events. A Pentagon task force recently concluded that the military employs twice as many doctors as it would need even in wartime. Rightsizing just this part of its workforce could save taxpayers more than half a billion dollars a year.

Some argue the Pentagon has already taken a budget hit. Military spending has been cut in the last decade. But that occurred only after an unprecedented increase under Ronald Reagan. Military spending today is higher than in 1980, when Russia invaded Afghanistan and the Cold War was in full battle cry. The Cold War is over. We no longer have an enemy sufficient to justify spending hundreds of billions of dollars on the next generation of submarines and fighter planes and anti missile defenses. The CIA reports that Russian spending on new weapons declined by two thirds between 1991 and 1993 and continues its descent.

The situation would be laughable if it weren’t so tragic. Our military budget is nearly as large as the military budgets of all the nations of the world combined. It is 17 times more than the combined military spending of the six countries the Pentagon sees as our most likely adversaries.

The argument over military spending isn’t about how much we need to defend the United States. It is about how many major foreign wars we should singlehandedly and simultaneously be able to fight and win. The Pentagon wants the capacity to fight two simultaneous wars without any allies. Former high ranking military officers and defense experts across the ideological spectrum view that objective as absurdly self-serving and wildly wasteful.

The conservative Cato Institute estimates that $600 billion could be slashed from the Pentagon budget over the next 7 years while maintaining a world class military force. Several former Admirals at the liberal Center for Defense Information conclude that future military spending could be reduced by $500 billion. In sum, savings from transforming the Pentagon into a lean, mean fighting machine could almost balance the budget.

Congress tells us we have to make hard choices. But Republicans and Democrats alike refuse to allow us to choose to cut military spending rather than social spending. At $2.2 billion a copy, one B2 stealth bomber is equivalent to two year’s funding for the promising Americorps program. Republicans would eliminate Americorps and build 20 more B2s.

The cost of building 422 F22 fighter planes is $72 billion. That’s almost as much as Congress proposes to cut from welfare programs. The $50 billion cost of the Republican Star Wars program is several times more than the entire amount Congress expects to cut from the student aid program.

Fearful that those affected by proposed budget cuts will rise up and demand military spending cuts instead, Republicans propose to require a 60 percent Congressional majority before reductions in military spending can be used to pay for domestic programs.

For Newt Gingrich this is the best of all possible worlds. He can appear to be taking on the special interests by proposing radical budget cuts even while his home district benefits from the Republican budget. Cobb County, Georgia receives less than $1,000 per capita from the federal governent in safety net programs and over $6600 per capita in military spending. After the Republicans cut a trillion dollars from the federal budget Newt’s home district could end up receiving even more federal largesse.

Democrats and Republicans alike prefer to keep the question of significant cuts in military spending off limits to public debate. If we let them get away with this we will end up fighting among ourselves. Let’s not let them. 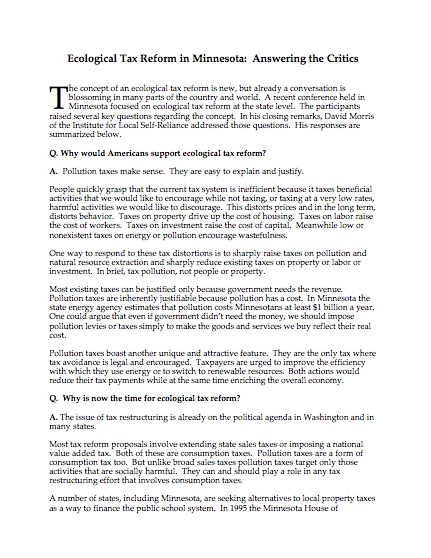 Energy Ecological Tax Reform in Minnesota-Answering the C…
From the Desk of David Morris Tax Pollution, Not Jobs