Back issues are not available online yet. Individual Facts to Act On (FTAO) are available from the Institute for Local Self-Reliance for $1, or $20 for the whole set. These prices include shipping and handling.

Strategic Lawsuits Against Public Participation (SLAPPs) are increasingly being used to intimidate, harass, or penalize citizen activists. Several suits and countersuits connected with battles over incineration are described.

Lists four approaches that communities can take to preserve control of the recycling process, and contacts at community-based companies.

3. Unregulated Hazardous Waste Adds up to Large Threat in Vermont (May 18, 1990)

According to a study released by the Environmental Law Foundation, hazardous waste is more of a dilemma for Vermont than had been previously realized.

Profiles the materials recovery programs of 16 communities with high recycling and composting rates, based on in-depth case studies of these programs in ILSR’s report, Beyond 40 Percent: Record-Setting Recycling and Composting Programs.

5. Are Polystyrene Food and Beverage Containers a Health Hazard? (August 15, 1990)

Summarizes a paper by George Baggett on the neurological, hematologic, cytogenic, and carcinogenic effects of styrene ingestion. Polystyrene, commonly known as styrofoam, contains remnants of styrene. (Refer to #22 and 23 for related information.) Download PDF file for #5

Cites waste haulers and industries across the U.S. that are working together to recycle used newsprint and establish a computerized system for helping communities locate markets for collected paper.

7. North Carolina Lawyer’s Unique Anti-Incineration Strategy (August 24, 1990)Outlines how John Pike purchased part of a large tract of land being considered as the site for an incinerator. He then sold small plots to 70,000 landowners, with all of whom the public officials would have to negotiate settlements.

Summarizes the Senate’s pro-incinerator stance prior to passage of the final version of the Clean Air Act, and Clean Water Action’s efforts to remove incinerator provisions from the Act.

Summarizes the problems with incineration, including toxic ash that is a by-product of the process, and the loss of energy resulting from waste incineration when compared with energy savings from recycling, which does not destroy materials.

Describes the Local Exchange Trading System (LETSystem), the currency it created, and the bartering that allows participants to exchange goods and services. LETS is a response to the declining economic climate for small communities around the world.

As recycling gained momentum across the country, the waste hauling industry swung into action to keep any new players out of “its” domain. However, when community-based groups demonstrate how recycling can spur local economic development, city officials often legislate to protect local initiatives and small-scale enterprises.

At an international conference, scientists predicted that the problem of rising levels of mercury of pollution would soon equal or exceed the impact of acid rain. Waste incineration and the burning of fossil fuels were cited as the sources of mercury pollution.

Analyzes the legal problems in various states of keeping garbage out of other jurisdictions. Includes contact list for key states, a list of selected leading cases, and legal references. (Refer to #28 for related information).

Critiques a book by Richard Denison and John Ruston of the Environmental Defense Fund, and refutes the book’s assumption that incineration is necessary. In contrast are favorable comments on Barry Commoner’s book, Making Peace with the Planet, in particular the chapter entitled, “Preventing the Trash Crisis.”

Defines terms such “recycled” and “post-consumer,” and suggests that legal standards will be required to achieve sustainable materials use. Includes table of state-of-the-art legislation covering several materials.

22. Polystyrene Industry Responds to FACTS TO ACT ON No. 5, “Are Polystyrene Food and Beverage Containers a Health Hazard?” (June 14, 1991)

The industry response seeks to establish that there is no cause for concern. (See #23 too.) Download PDF file for #22

George Baggett, the author of FTAO #5, presents a rebuttal to the industry’s argument. Download PDF file for #23

Profiles the founder of the Center For Environment, Commerce and Energy (CE) 2. McDonald’s mission is to “mobilize the African-American community to aggressively participate in its environmental future.”

Citizens in Austin, Texas, take a comprehensive approach to solid waste management, in ways that can serve as models for other cities.

Portrays The Loading Dock, a non-profit building supply recycler. The Loading Dock supports low-income housing by gathering, sorting, and distributing surplus building materials that might otherwise end up in landfills.

Electoral politics, information dissemination, and legal action are often necessary to halt waste incineration programs and replace them with recycling programs. The effective use of these strategies in communities throughout the country is described.

As a follow-up to FTAO #17, this describes ways and means by which several communities have successfully banned the importation of solid and/or hazardous waste by discovering “loopholes” that allow them to circumvent the Commerce Clause.

In LaCrosse County, Wisconsin, the problems in scientifically determining waste generation figures in order to build incinerators were highlighted in a precedent-setting case. Both the engineering company which determined the figures and the county were held liable.

Explains the long, but successful process by which the California Resource Recovery Association, the first state recycling association in the U.S., joined forces with other grassroots organizations to implement the first comprehensive countywide mandatory recycling program.

As Georgia prepares for new state management laws that require county or multi-county solid waste management plans, a statewide network has formed to insure that citizens’ voices are heard in the county planning processes.

Relates the history, problems, current interest, and outlook for the future of MSW composting, including exploring the question of source-separated versus mixed systems.

Depicts the innovative efforts of one state to reduce its waste stream by promoting composting at home. Includes a step-by-step plan, as told by Georgia’s governor Zell Miller, on how to build and maintain a backyard composting bin.

34. A Coordinated Materials Policy Benefits the Economy and the Environment (August 7, 1992)

Describes key elements of an integrated statewide materials policy, which is portrayed in detail in the Institute’s publication Getting the Most from Our Materials: Making New Jersey the State of the Art.

Highlights the contributions of the Tiny Tot Diaper Service to the Indianapolis community. As a small business that reuses material, Tiny Tot employs residents while easing the waste burden for the city.

37. Who Needs a Radioactive Waste Dump in the Beautiful Mojave Desert? (January 4, 1993)

Back Issues of ILSR’s Facts to Act On 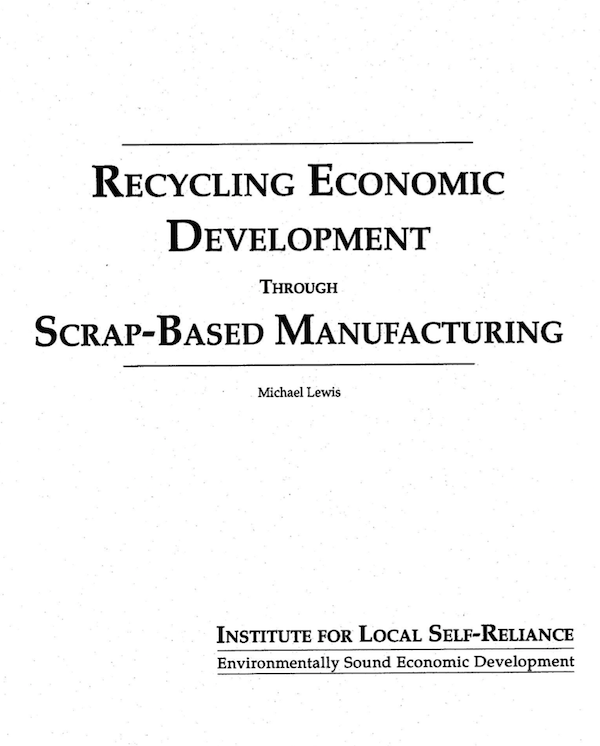 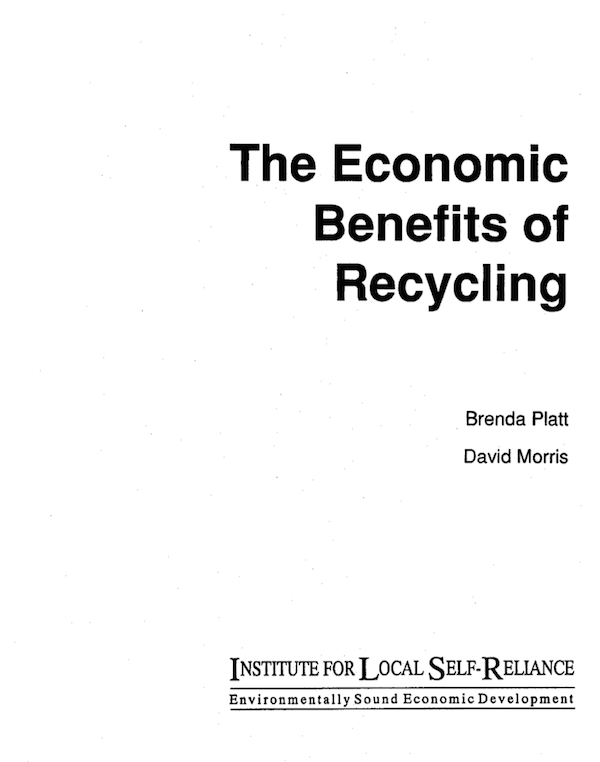