In an effort to raise funds, thousands of public schools are encouraging parents and neighbors to shop on-line. More than a dozen new companies, such as Schoolpop.com and SchoolCash.com, have created web portals that enable users to shop a hundreds of on-line retailers. … Read More 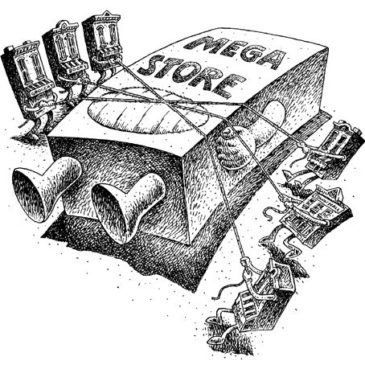 Published in 2000, The Hometown Advantage examines the impacts of chain retailers and provides a guide to reviving your community’s local economy. … Read More

If you’ve always wanted to be an activist but stayed away because of the bad food and long hours, there’s good news. A group called SlowFood has taken up the cause of local cuisine and is defending it against everything from hyper-hygienic policies to the homogenizing influence of mass distribution. Their organizing strategy: sit down and enjoy a delicious, leisurely meal. By Stacy Mitchell… Read More

Two years ago, a group of independent restaurant owners in Tucson, Arizona stopped thinking of themselves as competitors and launched a collective effort to counter the rapid expansion of chain restaurants. They formed an organization, Tucson Originals, and pooled resources for group promotion and purchasing. Their success inspired the creation of a national independent restaurant network that hopes to seed similar local alliances in cities across the country. … Read More

After a 1989 earthquake destroyed virtually all of its central business district, the city of Santa Cruz, California adopted the Downtown Recovery Plan (DRP), a comprehensive policy for rebuilding the downtown in accordance with several community goals. A decade later, many of these objectives have been met. Downtown Santa Cruz is a healthy, pedestrian-oriented mix of commercial, residential, and public uses. … Read More

Wal-Mart already operates twenty stores in Maine, including three supercenters, and ranks as the fourth largest employer in this state of 1.2 million people. But that’s not enough. Wal-Mart wants to open supercenters, which combine general merchandise with a full supermarket, up and down the coast. This would enable the company to become the dominant, if not only, retailer in many of Maine’s communities. … Read More

Starbucks expected few hurdles when it sought city approval to open a fifth store in Evanston, Illinois earlier this year. That all changed when twenty neighborhood residents showed up at the Zoning Board meeting to voice their opposition. … Read More

In September, Wal-Mart was hit with three separate charges of predatory pricing. Government officials in Wisconsin and Germany accused the retailer of pricing goods below cost with an intent to drive competitors out of the market. In Oklahoma, Wal-Mart faces a private lawsuit alleging similar illegal pricing practices. … Read More

As the story above suggests, Wal-Mart routinely engages in predatory pricing. But the company would prefer not to break the law in the process. To this end, Wal-Mart has joined with Murphy Oil in an effort to repeal a Florida law that prohibits predatory pricing among gasoline retailers.