AT&T and others regularly woo their regulators and policymakers with promises to built increase investments or expand networks in return for deregulation or merger approval. A recent Gerry Smith Huffington Post article examines a familiar pattern of broken promises made by telcos, what has developed into a chronic wham-bam-thank-you-ma'am attitude by these massive corporations.

We actually have a name for this, Kushnick's Law: "A regulated company will always renege on promises to provide public benefits tomorrow in exchange for regulatory and financial benefits today."

Smith revisits promises made back in 2006 when AT&T merged with BellSouth. AT&T promised to roll out broadband to every customer in its territory by 2007. Tell that to Cedric Wiggins from rural Mississippi. From the article:

But five years after that deadline, Wiggins, 26, is still waiting. Inside his trailer, his only affordable Internet option is a sluggish dial-up modem that takes five minutes to load the online job listing sites he has visited since being laid-off as a truck driver in May. Every few months, he calls AT&T to ask when he will receive a faster connection. The answer never changes.

“They said they don’t offer it in my area right now,” he said. “There’s nothing I can do.”

Smith found that promises made to gain merger approval are traditionally broken and/or so weakly constructed that the players can comply with little or no effort. Empty promises continue to be accepted by the feds and conveniently forgotten, except people like Wiggins.

No one knows the pattern better than those on the inside:

“We have a problem at the commission, historically, with following-up on merger conditions,” said Michael Copps, who served on the FCC from 2001 to 2011, and who voted to approve the AT&T-BellSouth merger. “A lot of these conditions that get attached are not that great, and they are not always really enforced.”

AT&T tells Smith it kept its promise, but would not respond when pressed for details about where it had expanded. Self reporting is accepted from the FCC on merger conditions, putting the burden on the public to demonstrate noncompliance -- though most of the public is rarely even aware that such promises were made.

Promises are often littered with loopholes. From the article:

AT&T committed to provide Internet service at minimum speeds that were hardly faster than dial-up, they say, while pledging to deliver “alternative technologies,” including satellite Internet, through as much as 15 percent of its territory. And at the time, satellite Internet was already available through nearly all of BellSouth’s turf, making AT&T’s commitment “utterly meaningless,” said Dave Burstein, editor of the telecom industry publication DSL Prime.

Smith also looks into a 2009 promise made by CenturyLink in order to get approval to buy Ebarq in the South and Midwest. CenturyLink promised to bring wired Internet access to 90% of the population within three years but 87% of those customers already had it. Meeting that commitment was almost meaningless. But we cannot simply leave the blame at the feet of the FCC or other agencies. Smith details how the gigantic AT&T/BellSouth merger almost fell through, but for the efforts of AT&T's lobbyists. FCC Commissioners received a letter signed by 29 members of Congress - all but two had each received significant contributions from AT&T and BellSouth PACs and PAC employees over three election cycles, according to InfluenceExplorer.com.

When the deal was finally approved, expectations were high:

AT&T had made “real, tangible, and important broadband commitments” and there would be “no exceptions for sparsely populated areas,” Copps said at the time.

AT&T’s commitment “will only further encourage the deployment and adoption of broadband networks into yet unserved or underserved areas,” Chairman Kevin J. Martin and Commissioner Deborah Taylor Tate said back then.

The 2006 CEO, Ed Whitacre, doubled his salary to $31 million, stock price almost doubled, and $5 billion in dividends went out to investors. The following year, stock went up another 16% and the company paid another $8.7 billion in dividends. Clearly, AT&T reaped the rewards for making promises, but it is equally clear that they also reaped rewards for breaking promises. Even 2006 backers of the deal now realize AT&T has not lived up to its commitment:

“It gives me heartburn,” said Tyrone Ellis, who as chairman of Mississippi’s public utilities committee in 2006 wrote to the FCC to urge approval of the deal, citing the promise of rural broadband throughout AT&T’s territory. “They didn’t follow through. But I don’t have the power to force their hand. The FCC does.”

Meanwhile in Mississippi, Wiggins and his neighbors sit on the unfortunate side of the digital divide. Looking for a full time position, paying bills, conducting business, public safety, and the ability to communicate with loved ones are all hampered by the lack of anything beyond dial-up or expensive satellite.

For years now, the FCC and other agencies have allowed harmful consolidation while failing to attach meaningful conditions. We just examined how Comcast gamed the FCC to take over NBC -- the public gained practically nothing in allowing a massive company even more market power.

The problem with such massive companies is not just that they can squash competition and raise prices with impunity. Their scale and dominance allows them to shape how the entire industry is regulated by the public. They buy legislation in DC and state capitals with near-impunity. They slow innovation, harming the economy.

Communities are smart to depend on themselves for essential infrastruture, not promises from distant mega-corporations. 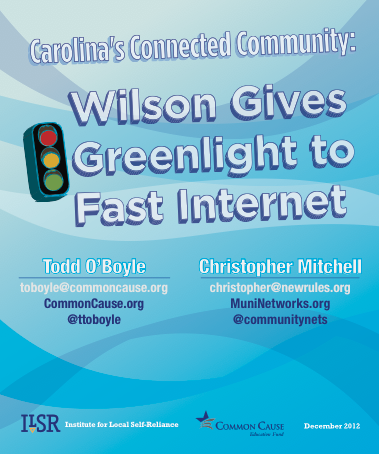