Most renewable energy advocates are familiar with feed-in tariffs, also known as CLEAN Contracts.  They offer standard, long-term contracts for renewable electricity with prices sufficient to allow producers to get a reasonable return on investment (in Germany, it’s 6 to 8 percent). And research has shown that they tend to drive prices down more effectively than other renewable energy policies by reducing developer risk in exchange for lower rates of return.

Germany offers proof, to the tune of an average installed price for distributed solar of just $4.11 per Watt. The following chart illustrates the dramatic fall in installed costs for 100 kilowatt and smaller PV systems in Germany, from 2006 to 2009.  The final price, 2834 Euro per kW, is equivalent to $4.11 per Watt (using today’s exchange rate of 1 Euro to $1.45). 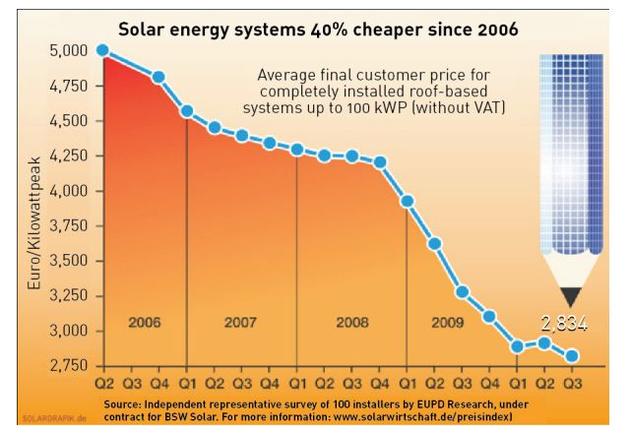 Did I mention this is the AVERAGE price? For comparison, here’s the average price for solar PV systems under 10 kW installed in the U.S. in 2009, by state.  Chart is from page 19 of the brilliant report, Tracking the Sun III: The Installed Cost of Photovoltaics in the U.S. from 1998-2009 (large pdf).

Since California and New Jersey comprise most of the U.S. market, the equivalent national average installed cost for 2009 was probably close to $8.00 per Watt.  Data from the same report shows that 10 to 100 kW systems were about $0.30 per Watt cheaper, leaving U.S. solar PV only slightly less than twice as expensive as German solar PV of similar size.

Did I also mention that the German policy driving solar costs down only costs German ratepayers the equivalent of a loaf of bread per month?  In the U.S., the federal renewable energy incentives cost $4 billion in 2007, or about $3.17 per household per month (or about the same price as an Italian baguette). 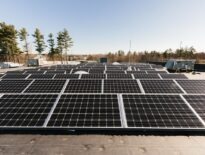