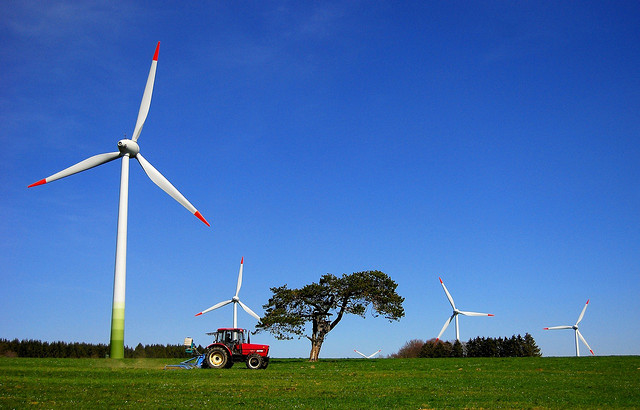 One of the biggest barriers to making investments in energy efficiency and renewable energy is the upfront cost. So what if members of rural electric cooperative and rural municipal electric utilities could borrow money for small-scale improvements on the same terms as the utilities for their large-scale power plants?

The USDA’s Rural Utility Service’s Energy Efficiency & Conservation Loan Program (federal rule) allows rural utilities to borrow money at low rates – 30 years at 3.3% – for energy efficiency and renewable energy improvements at their facilities or properties owned by the customers it serves. The obligation to pay can be tied to the meter, allowing the energy savings and the financial obligation to pass from owner to owner of the property.

$6 Billion for Rural Energy Efficiency could…

Let’s not forget that most of the money spent on a rural electric bill leaves the community, to pay for importing power from a remote supplier. Estimates suggest that 70% of the savings ($22 billion) will be retained within the community.

But it’s not just for energy efficiency.  What if all that money was invested in renewable energy like solar power?

$6 Billion for Rural Solar Energy could…

But the rural utilities can also make money offering this program. The USDA allows utilities to re-loan the money to individuals at up to 1.5% interest above their own borrowing rate of 3.3%. On loans of $6 billion, rural electric utilities would have a margin of $59 million per year re-loaning the money to their customers. Certainly there’s some program overhead, but cooperatives could likely aggregate their efforts, much like they’ve done by creating cooperative institutions like CoBank, and generation and transmission cooperatives.

A $6 Billion Opportunity for the Rural Energy Economy