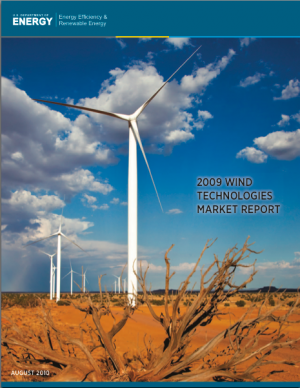 An incredibly thorough, annual analysis of the U.S. wind market.  A must-read for anyone doing analysis of wind power data in the United States. The authors even provide their data file.  Download the report.

From the Executive Summary:

Wind Power Additions in 2009 Shattered Old Records, with roughly 10 GW of New Capacity Added in the United States and $21 Billion Invested. The pace of utility-scale wind power capacity additions in 2009 was 20% higher than the previous U.S. record set in 2008, while cumulative wind power capacity grew by 40%. This was achieved despite the financial crisis that roiled the wind power industry in 2009, and the significant reductions in wholesale electricity prices that began in mid- to late-2008 and have continued to the present. A variety of market drivers allowed year-on-year installation growth to persist in 2009, including: carryover of projects initially planned for completion in 2008; elements of the American Recovery and Reinvestment Act of 2009 (Recovery Act), including the Section 1603 Treasury Grant Program; the expiration of bonus depreciation rules at the end of 2009; and state renewables portfolio standards.

A Growing Percentage of the Equipment Used in U.S. Wind Power Projects Has Been Sourced Domestically in Recent Years. U.S. trade data show that the United States remained a large importer of wind power equipment in 2009, but that wind power capacity growth has outpaced the growth in imports in recent years. As a result, a growing amount of the equipment used in wind power projects is being sourced domestically as domestic and foreign companies seek to minimize transportation costs and currency risks by establishing local manufacturing capabilities. Imports of wind turbines and select components in 2009 are estimated at $4.2 billion, down from $5.4 billion in 2008. When presented as a fraction of total equipment-related wind turbine costs, the overall import fraction is estimated to have declined from roughly 50% in 2008 to 40% in 2009 as domestic manufacturing investments outpaced import growth.

The Average Nameplate Capacity, Hub Height, and Rotor Diameter of Installed Wind Turbines Increased. The average nameplate capacity of wind turbines installed in the United States in 2009 increased to roughly 1.74 MW, up from 1.66 MW in 2008 and 1.65 MW in 2007. Since 1998-99, average turbine nameplate capacity has increased by 145%, but growth in this metric has slowed in recent years due to the dominance of GE’s 1.5 MW turbine and as a result of the logistical challenges associated with transporting larger turbines to project sites. In addition to nameplate capacity ratings, average hub heights and rotor diameters have also scaled with time, to 78.8 and 81.6 meters, respectively, in 2009. Since 1998-99, the average turbine hub height has increased by 40%, while the average rotor diameter has increased by 69%: these trends are one of several factors impacting the project- level capacity factors highlighted later.